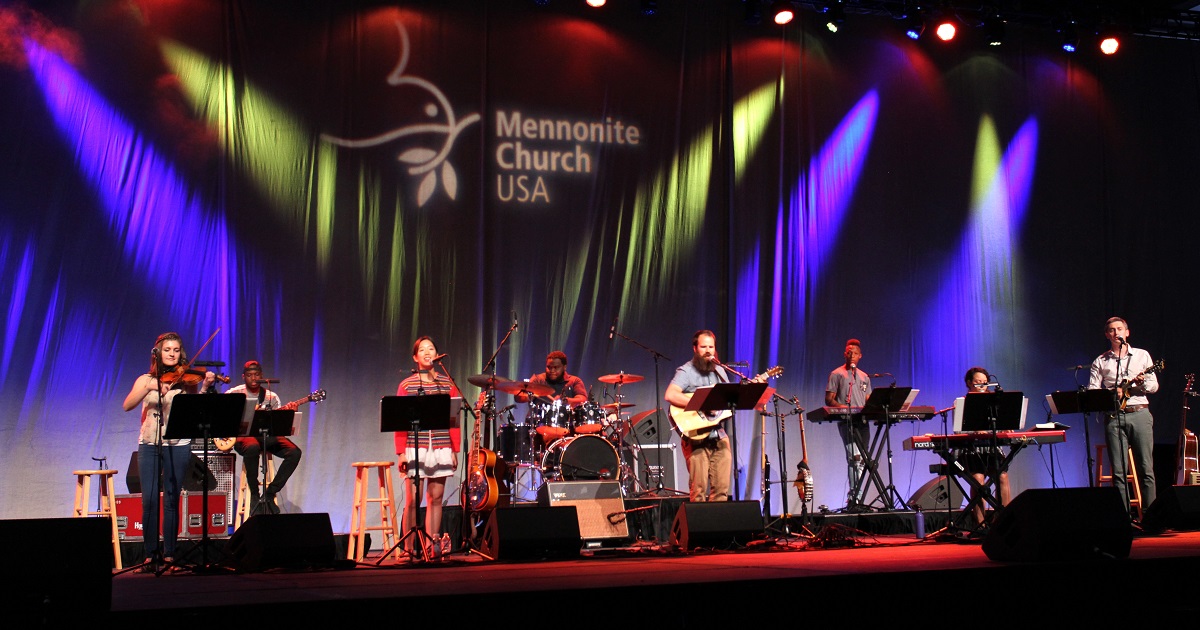 Tuesday evening’s opening worship at MennoCon19 had the festive air of what speaker Glen Guyton called “a Mennonite family reunion.”

Leaders from Kansas City-area Mennonite congregations—Hanna Aganya, co-pastor of Eden Life Church, Sandeep Thomas, pastor of Argentine Mennonite Church, and Ruth Harder, pastor of Rainbow Mennonite Church—welcomed the 2,500-some people gathered for worship. Harder then introduced two members of her congregation, Aimee Kraus and Jill McLain Custer, who are of the Iowa tribe, and acknowledged that the meeting was being held on land that had belonged to the Kaw, Osage, Shawnee and Wyandotte peoples, among others.

MennoCon19 is the first MC USA convention to combine adults and youth in all the worship sessions. Guyton acknowledged the various generations represented. He said he hoped “we are unified in our desire to seek healing and hope for our world.”  He said, “This is the official Mennonite family reunion,” then read from Hebrews 10:23-25.

After showing photos of places and people he’s visited in his role as executive director, he encouraged people to “take pictures, be kind and think about why you are a part of MC USA.”

Guyton referred to the practice of “passing the peace of Christ,” and Pruitte-Sorrells called on everyone to put it into practice. She said, “We have many ways of communicating, but a handshake is a basic practice; it’s a sign of acceptance and an extension of peace.” She encouraged people to create a handshake with someone not next to you.

Pruitte-Sorrells said it is God’s intention to draw us together and discern the Spirit of God among us. The worships this week will focus on John 20:19-22, which she read. “We may feel overwhelmed by how many people are here or overjoyed by meeting old friends,” she said, “but I encourage each of you to experience the Holy Spirit.” She added that Jesus is present in our space, in our heart. “Experience the presence of God in your space. Together we can create something new.”

After a drama group portrayed the peace of Christ coming to people who are at first running around in confusion, Pruitte-Sorrells prayed for transformation and healing, for God to open hearts to a richer relationship with God and with each other.

Dick Thomas led an appreciation for Carlos Romero, who is retiring as executive director of Mennonite Education Agency after 17 years. Romero said he had hope for the church, that the best is yet to come. “What you do can make a difference in the world,” he said.