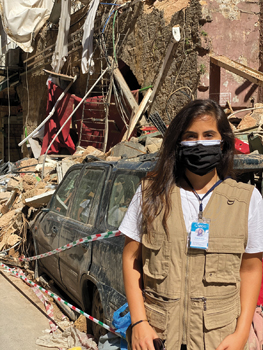 Maya El Jundi, MCC project coordinator for a peacebuilding project, helps to clean up a Beirut neighborhood with MCC partner Development of People and Nature Association. She is among several MCC project staff and partners helping daily with cleanup. — Mennonite Central Committee

Garry and Kate Mayhew were cleaning up after dinner in their Beirut, Lebanon, apartment on Aug. 4 when they felt the ground shake just before they heard the boom, so loud and so powerful it threw them to the floor.

The Mayhews and their daughters, 6 and 4, who had been watching TV in another room, took shelter in the bathroom, an interior room, away from whatever was happening outside.

“From my experience of living in Afghanistan for six years, I was almost sure this was an explosion from a bomb,” said Garry Mayhew.

But it wasn’t, according to Lebanese government authorities, who said the explosion was caused by improperly stored ammonium nitrate at the city’s port. The power of the chemical compound, used to make fertilizer and explosives, caused destruction throughout the city.

The Mayhews, who are representatives for Mennonite Central Committee in Lebanon, Syria and Iraq, contacted the other four staff members in Beirut. They were safe but shaken.

One had a leg injury from flying glass, and some had been in the midst of the chaos, seeing people blown off their motorcycles by the blast, hearing the screaming car alarms and cries of the people and escaping the destruction near the port.

Most of the staff stayed at the Mayhews’ house for the night.

Over the next few days, the magnitude of the damage became clear. The port, which used to be full of ships and warehouses, including grain towers holding 15,000 metric tons of grain, was destroyed.
In neighborhoods nearest the port, concrete walls in multistory buildings were blown out, crushing the cars on the streets below.

“The needs are massive,” Garry Mayhew said, “from getting plastic on the windows and making repairs to the houses. COVID-19 is an even bigger risk than it was because so many people are gathering in the streets. People need hygiene. People need water, psychosocial care, reconstruction.”

With little to lose

People in Lebanon were already struggling with a political and economic crisis before the explosion. The value of the Lebanese lira has decreased by 85 percent since October, and about 50 percent of the population lives below the poverty line. Beirut had not had much public electricity for a month.

In the Karantina neighborhood, home to many people living in poverty, Kate Mayhew and a staff person from MCC’s partner Popular Aid for Relief and Development asked people to describe what was destroyed.

“One person just said, ‘I have nothing. So I have nothing to get destroyed,’ ” Kate Mayhew said. But in the buildings where they live, damage is significant.

With the destruction of Leb­anon’s primary port and granaries, food shortages are expected to become a problem.

MCC is providing food for the most vulnerable people in Karantina in partnership with Popular Aid for Relief and Development. The two organizations have worked together throughout the Syrian refugee crisis to support education and provide food and psychosocial care.

“We do a lot with food already, so we are well positioned to scale up our program to meet food needs,” said Garry Mayhew.

Numerous organizations distributed food immediately after the explosion, but MCC will address the need that will still be there when they are gone. MCC will supply food over the next nine months.

MCC also will assist in providing psychosocial support for children, helping them to deal with yet another trauma.

“Everyone’s dealing with trauma,” said Garry Mayhew, “including ourselves, our kids.”