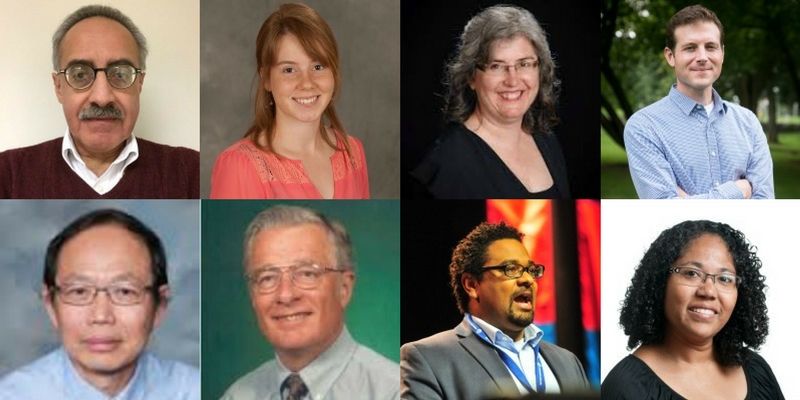 For our October issue of The Mennonite magazine, we invited people across the church to reflect on the question: How is your faith impacting what you will do on election day?

As Election Day 2016 draws near, my faith compels me to study the records and positions of local, state and federal candidates and vote for those who will advance social justice and especially diversity, inclusion and equity.

I won’t sit on the sidelines and let others decide the future of my community and my country, as I did for much of my adult life. As a journalist for 26 years, and to be impartial and avoid conflicts of interest, I didn’t express personal opinions about candidates. That meant no bumper stickers, no yard signs, no campaign work and no contributions to candidates or causes.

Since arriving at Goshen College nearly 10 years ago, I’ve had the freedom to support candidates and express my opinions. And I’ll continue to do so now that I’ve joined a denomination and a congregation dedicated to dismantling racism, healing divisions and valuing the gifts of God’s diverse people.

To me that also translates into backing candidates who support affordable health care, adequately funded public education, decent housing, fair wages, an equitable tax system, non-discrimination laws, an end to police brutality, justice for undocumented immigrants, and inclusion and equity. And I encourage others to do the same.

Cheri Baer is a student at Hesston (Kansas) College. You can read her full article in our October issue.

If U.S. Christians want to follow Jesus, we must stop attaching salvation to the party we vote for and the issues we stand behind. We must not think someone is not a Christ-follower simply because he or she is on the “wrong” political team. Instead, we might think they are misguided and not spend time with them. That is precisely what we need to change. Just as Jesus ate lunch with tax collectors, we need to spend time with one another. Maybe we Republicans should eat a few more meals with Democrats. Or perhaps we liberals could grab coffee with a few conservatives.

Elena Buckwalter is a student at Hesston (Kansas) College. You can read her full article in the October issue of The Mennonite.

I plan to vote in this year’s election. I like to believe my vote may make a difference, even though I know it won’t be much. I want to respect whatever leader gets elected, no matter how much chagrin it may cause me. Yet I also want to hold lightly to my vote. I want to be well-informed and vote for a candidate I think will be the most competent in leading our country, but I want to recognize that all our leaders will be flawed and that at the end of the day, God is in control. We can all sleep a little better at night knowing we have a trustworthy leader in heaven—one we can hope in much more than we ever could a president.

As members of God’s kingdom, we will always clash with human power structures. As Christians, we are at odds with all governments that would claim our allegiance. It is our calling to stand with the oppressed, to reject greed, violence, and the destruction of creation. Christianity is essentially a religion of protest, struggle, and suffering for the sake of our God.

Of course, we could reject voting, since it condones that which we oppose. But we know we will never be able to turn our backs to the sin of government-sanctioned murder, unjust economic systems, and systemic discrimination. Alternately, we could claim our place in it, yet not of it.

Without false hope or blind trust, I wholeheartedly choose Hillary Clinton as the leader I would prefer to protest in this Christian/Government dichotomy. Under Clinton’s leadership, my hope is that our faulted democracy will kill as few people as possible and save as many resources as possible to buy time for us to organize local systems which build co-operation upward rather than waiting for some form of justice to trickle down.

When I dream of the Kingdom of God, the United States of America is not the organizing principle.

Elections have consequences! So goes the reminder made by politicians and pundits every voting cycle. Elections do have consequences, and our country faces considerable policy challenges in areas of education, trade, healthcare, and immigration.

This election has consequences for another reason. For the first time in American political history, a woman is on the front of the ticket for a major party. Not too long ago I bought my six-year-old daughter a picture book of all the American presidents (as a former social studies teacher, I couldn’t resist). I’ll always remember one evening before bedtime her quickly paging through the book and then asking with a disturbed tone, “Daddy, why are there only boy presidents?”

My wife and I are trying to teach our daughter that she is wonderfully made in the image of God, and that she has been given enormous strength to love God and others with her whole heart, soul, and mind. But even at age six, almost daily we witness the discouraging messages girls receive about the limits of their strength.

On Election Day, I’ll be standing in line with my daughter, eager to vote my faith-informed convictions, and even more eager to create a future in which there truly are no limits for our daughter’s strength.

Jesus said that the Kingdom of God is like yeast (Matthew 13:33 and Luke 13:18-21). Christian faith is like yeast is to bread. If Christian values and morality are yeast, so politics is the bread. Politics deals with distribution of power – the making, slicing and distributing of bread.

As a Christian I feel that God called me to be in yeast-making business, rather than in the business of making, slicing and distributing power. God called me to make disciples (Matthew 28:18-20) and to clean the old and bad yeast (1 Corinthians 5:6-8) with sincerity and purity of heart.

In politics, my role is in the training and equipping all people, including politicians, to grow in Christ’s values and morality. The Kingdom of God is about how to represent God’s values and morality in this world. In politics Christians should pursue values that strive for human dignity, peace, justice and welfare for all people, especially for the least and the poor.

Nowadays I encourage all Christians to abandon any policy that degrades the human dignity by disintegrating the unity of the family and culture. I encourage people to support policies that allow human dignity to thrive, that allow immigrants to have freedom to choose, live and work peacefully in the United States, express their cultural and religious values, and be united with their families.

The  Christian faith can help us avoid two mistakes about politics. One mistake is to imagine that any political party or leader would bring us near to the Kingdom of God. Both the Republican and the Democratic parties, with overwhelming support from the American public, believe that military violence is a proper and necessary response to our enemies. Both support a giant military establishment. In the face of our nation’s militarism, we should remember that God is the Lord of history. We are called to be non-conformed to the world.

A second mistake would be would be to disrespect government and to withdraw from the political process. We live in, and benefit from, a welfare state democracy.  Our government offers opportunities to promote justice, peace and equality. In Kansas, Mennonites have made a significant witness against the death penalty. This year, 2016, three Mennonites who oppose capital punishment are running for the state legislature. Our votes can make a difference.

We should beware of politicians who exploit racial fears, anti-immigrant hostility and religious stereotypes. It is important to examine critically the claims of politicians. Do they have specific proposals to address the needs of the poor, the sick and the unemployed? Are they people of compassion and sober judgment?

Kevin Ressler is the Executive Director of Meals on Wheels in Lancaster, Pennsylvania, and attends Community Mennonite Church of Lancaster.

The secret ballot is the core tenant of a fair democracy allowing one’s political beliefs to remain untainted by the influence of neighbors. To the contrary stands faith,where the act of baptism is a public affirmation of an allegiance sharing no affinities.

In today’s highly politicized world we would do well to remember that our allegiance is to God and that our allegiance to God is not through the state. As Anabaptists, our founding coincided with Europe’s first group taking seriously Jesus’ separation of church and state through adult confessing baptism.

For a pacifist, voting is never insignificant. Yet, whether I participate or not, I am complicit in this system’s sins which use my economic, intellectual, and personal accomplishments for its purposes of disproportionate resource allocation. I am, after all, a citizen.

I am more concerned with building a church that includes the whole diversity of God’s creation than whether candidate A or B will be less destructive to our environment and human siblings for profit.

I will begrudgingly vote, but to be clear: I will never vote for an unapologetic bigot who arrogantly does not believe in repentance or a need for forgiveness. Only evil can come of that.

I have decided to vote on Election Day because it seems like the right thing to do.

Truthfully I would love to bury my head in the sand and just pretend the election wasn’t happening; especially since I am not one to get excited about politics. However, the reality is, people’s lives will be affected by the votes that are cast on Election Day. In addition, after my experience of living in another country, I think differently about how our actions and laws affect other countries, immigrants and visitors.

Listening to this year’s election, I’ve heard candidates say how our country is the best and the greatest, but isn’t the U.S. population really a lot people from other countries?  Aren’t most of us immigrants in some way?  If that is the case, then shouldn’t we want what is best for both our country and the world?

My faith comes first and God’s people are my people. So if my vote means that we are a step closer to treating others with love and dignity, working at conflict through relationship vs. violence, and working with other countries instead of bullying them, then yes, I will cast my ballot.