Rachel Bergen of "The Canadian Mennonite" 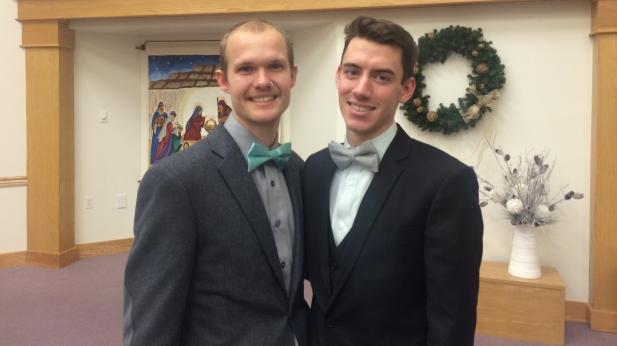 Craig Friesen and Matthew Wiens rang in 2015 by joining their hands and committing their lives to one another in front of friends and family at a New Year’s Eve wedding, the first same-sex wedding to ever be publicly officiated by Mennonite Church Canada pastors.

It was important for Friesen and Wiens to be married in a Mennonite church, even though it isn’t publicly welcoming of lesbian/gay/bisexual/transgender/queer (LGBTQ) couples.

Despite the denomination’s stance—whose Confession of Faith in a Mennonite Perspective states, “We believe that God intends marriage to be a covenant between one man and one woman for life”—the couple couldn’t believe the amount of support they received from friends, family and their faith community.

“It felt like a big deal because we had all these people here overwhelmingly and unequivocally supportive of our relationship,” says Friesen. “It was so powerful.”

According to members, this marriage is the outcome of a process that spanned nearly 20 years, through a gradual and intentional culture shift.

It began to take shape because of Connie Gutwin, who has attended the church for more than 30 years.

Her daughter Catherine is a lesbian, and although she doesn’t attend church, Gutwin felt it important for the church to welcome those who are same-sex attracted.

Ten years after Catherine came out, Nutana Park began adult education classes on same-sex relationships that drew LGBTQ people and their friends and family from all over the province.

Seven years later, the church sent a letter to MC Saskatchewan’s pastoral leadership committee stating its intention to engage all members of the church fully in all aspects of church.

According to Trish St. Onge, Nutana Park’s congregational chair, the assumption was that this included marriage, although it wasn’t stated in so many words.

“There were subtle cultural shifts over the years that came together that allowed us to confidently make that statement,” she says.

Retzlaff believed so strongly in Nutana Park’s welcoming statement, she says she was ready to put her career on the line if that was what it took.

Members of the congregation believe it was a profound moment of courage.

In October 2014, the area church’s pastoral leadership commission released a statement in response to questions throughout the province wondering what would happen to pastors who perform same-sex marriages.

The commission said individual congregations can decide if they will marry same-sex couples or not, and that no action will be taken against pastors for doing so.

The statement asks that “respect and kindness be demonstrated, regardless of the perspective taken, and that sensitivity be shown to persons and families involved in same-sex marriages who find themselves in the centre of this disagreement.”

According to Willard Metzger, executive director of Mennonite Church Canada, the denomination is at different points in its Being a Faithful Church process, a time of discernment that is looking at issues of faithfulness, including in areas of human sexuality.

“Individual congregations may need to respond to their specific ministry contexts before the discernment period is completed,” he says.

For Nutana Park, that meant marrying Friesen and Wiens, who they felt were ready to commit to each other and their faith community after getting engaged last year.

“Craig and Matt are a gift to our congregation, to MC Saskatchewan, to MC Canada, and to the kingdom of God,” Preheim says.

Hope for the future
Friesen and Wiens say their church experiences have generally been positive, and their church communities mostly open and accepting of their same-sex attraction.

“We’ve been really lucky to live in the city where there are two affirming churches,” Wiens says. Friesen grew up attending Osler Mennonite, which is also welcoming.

But that’s not the experience of many LGBTQ people, they say.

Wiens and Friesen aren’t sure if their marriage will trigger change in their area church or the denomination as a whole, but they do hope it will inspire hope in the LGBTQ community.

Despite differences of opinion across the country, the couple hope churches will refer vulnerable LGBTQ people to welcoming churches like the ones they attend. They also hope that more congregations will come out as being publicly affirming, not just privately.

“It would be wonderful if one day silence was enough,” Wiens says, “but I think that we have to recognize that positive action is required at the moment.”

“There’s a history of the church being really oppressive,” Friesen adds. “The silence still oppresses.”

Editor’s note: This originally ran as a story on the Canadian Mennonite website.  Reprinted with permission.