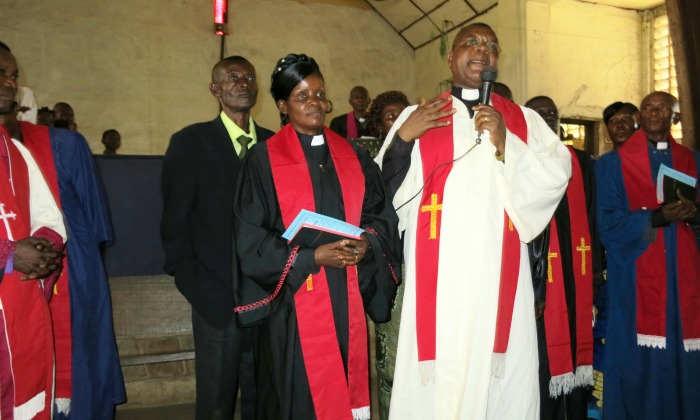 Photo: Bercy Mundedi was one of the first three women ordained by the Mennonite Church of Congo in 2013. Here in the chapel at Kalonda Bible Institute where Mundedi has taught for 10 years, Adolphe Komuesa Kalunga, national president of the denomination, presides over her ordination. Photo taken by Sandy Miller.

Holy Spirit fire dances in Bercy Mundedi’s eyes. It sets aflame the ministries to which she has been called – the most recent being to lead the Kalonda Bible Institute in Democratic Republic of Congo.

Mundedi was named director during the June 29-July 3 general assembly of Communauté Mennonite au Congo (Mennonite Church of Congo) that takes place every two years. The institute, located about three miles from the denomination’s headquarters in Tshikapa, is one of the main centers where Mennonite pastors are trained in Congo. There are currently 36 students enrolled at Kalonda, eight of whom are women.

“Reverend Pastor Mundedi is a woman who has strong spiritual, moral and intellectual qualities,” said Adolphe Komuesa Kalunga, national president of Mennonite Church of Congo. “She has shown herself to be committed to Jesus Christ and devoted to pastoral ministry. We have seen her to be eager to respond to whatever ministry the church requests of her.”

Mundedi has an intimate knowledge of Kalonda Bible Institute, having taught there for 10 years. She was one of the first three Mennonite Church of Congo women to be ordained in 2013, and rejoices in being part of the breakthrough work that God is doing in her denomination.

“My joy overflows,” Mundedi said just prior to her official installation as the director of Kalonda Bible Institute, scheduled to take place at the beginning of August. She described her vision for this ministry in a beautiful play on words, saying that she desired church leadership training [formation, in French] to lead to transformation of the whole person.

“I want to promote holy leadership in our churches,” Mundedi said. “I also want to inspire other women and girls to use their gifts in the church, to let them know that the gifts the Holy Spirit gives them are to be used in building up the church.”

When she was 14 years old, Mundedi was already preaching to her classmates. Older women in the church noticed Mundedi’s spiritual understanding, and encouraged her to pursue theological studies. Mundedi said she never would have made this decision without their intervention because, at that time, there was no possibility of women teaching and preaching in the church.

In 1996, after completing her degree in theology in Kinshasa, Mundedi returned to her village to teach, in order to express gratitude to the women who mentored her. Her gifts came to the attention of national Mennonite Church of Congo leaders, and they hired her as a professor at Kalonda Bible Institute. Even though church policies did not allow Mundedi to be a pastor, they invited her to train pastors!

Mundedi, a mother of seven children, laughed when asked how she will juggle her responsibilities at home with her new appointment.

“This is not the first time I’ve had to do this,” she said. “I’ve been in some form of ministry more than 20 years.”

However she did admit that her current challenge, moving her school-age children from Congo’s capital city, Kinshasa, to educational institutions in Tshikapa, is consuming a lot of her time and energy. Some of her children are married and have their own families.

Rod Hollinger-Janzen, executive coordinator of Africa Inter-Mennonite Mission, said that Mundedi is the first woman to direct a Mennonite Church of Congo institution since Elvina Martens, a North American missionary doctor, oversaw the denomination’s medical work in the 1960s.

“Pastoral training is a critical activity in preparing for the future of the church, and can greatly affect the church’s spiritual vitality,” Hollinger-Janzen said. “I am delighted that Rev. Mundedi, a deeply committed believer with a caring pastoral heart, has been given this opportunity to shape Mennonite leaders in Congo.”