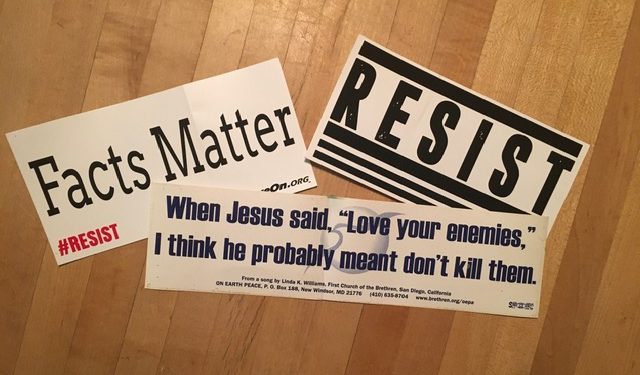 Signs of the times by David Augsburger.

Everyone talks at once, and everyone has something insightful to share. It was a week that demanded conversation. As insurgents rushed the capital, no one wanted to be alone, we wanted to check out perceptions and define meanings together.  We called each other to do sidebars to what we saw on TV and often emotions and heartfelt prayers erupted in our “Oh dear God” cries. Sunday we brought challenging articles to share for the discussion in worship, from Miroslav Volf , John Paul Lederach, The On Being Project, Timothy Snyder  and more.

1. What do we say to International friends?

Glen writes from Canada, John from Australia, Chris from Germany, Lars from Sweden, Ellie from Hong Kong, our list seems long, your’s must be painful too. They are embarrassed for us, and so sad, so kind, yet so puzzled at our nation’s regression into wild conspiracy theories and “trial by combat” on the streets.  They are gentle but sharp in questioning the mythology of white supremacy and the resultant racism and the violence of caste and class. We cannot avoid candid confession; we cannot deny silent complicity; we cannot spin or justify being bystanders or “Standing by.”  Those who see though from a distance know when we refuse to see it near at hand.

Untruths, non-truths, con-truths have been in the air like viral aerosols after a nationwide sneeze, and they cloud and corrupt our conversations. We talk together about how difficult it is to talk together. “How do I say to my client on FaceTime that her anger is misinformed?” a psychologist asks us at church. “When do I say that the information you are quoting freely needs to be fact checked?” another wonders. “Do I risk a comment on facebook that may alienate an old friend or extended family member?” Disagreement causes cut-offs, even questioning another in this time of high social anxiety is felt as a hostile act.  Isaiah, where are you? “Come now and let us reason together,” you invited as you opened your prophesy.  Can we?

One senator added January 6 “to a very short list of days –9/11, 12/7, now 1/6– in American History that  will live in infamy.”  Is our list truly so short?  Do we remember the date of shock and awe in Bagdad?  The dates of the atomic bombs? The massacres of indigenous peoples from one coast to another?  Lynchings? Mai Lai? The police beatings at Edmund Pettus bridge? The knee on George Floyd’s neck? We have competing lists. Many things that should be on our “never forget” lists aren’t,  many we need to address with sorrow we will not.  In your mercy, Lord , hear our prayer;  in your grace,  we ask, do You hear what we will not pray?

by John M. Barry (Penguin 2004) seems like a bad choice for Leann’s book club, but the terrifying story of the deadliest Pandemic in history, that erupted  in the winter of 1918 in a little town in Kansas to kill 100 million people worldwide is woefully appropriate reading. Influenza  killed more people in 24 weeks than AIDS did  in 24 years; more in a year than the Black Death did in a century.  If we look  for a story of triumph in the midst of tragedy this  narrative provides a model of  a world besieged and  yet emerging to face another day.

An ever present anxiety is stuck to our heels like the TP on the president as he climbs up to Air Force 1. Anxiety that a country founded on race is unable to join the human race. Anxiety that the fallacy of white supremacy and the illusion of American exceptionalism is so rooted in our red hats of “greatness” that we cannot deal with it. Anxiety that the utter inability to confront COVID 19 cogently, as other nations have done, may reveal our inability to confront the infections in the body politic. Anxiety that our nationwide narcissism has so permeated self absorbed evangelicalism and compliant Christianity that we are left with few moral voices or little moral authority.