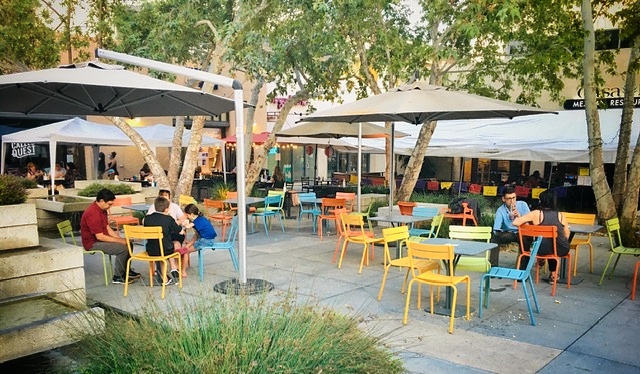 “A table for you” a Claremont Village scene by David Augsburger.

A favorite friend writes recommending a book, Neal Stephenson, Snow Crash, 1992. A Sci-fi novel that stretches both imagination and theology. Jim Mininger underlines a significant quote about the virus of fundamentalism, a Kansan creation: “All people have religions. It’s like we have religion receptors built into our brain cells, or something, and we’ll latch onto anything that’ll fill that niche for us. Now, religion used to be essentially viral—a piece of information that replicated inside the human mind, jumping from one person to the next. That’s the way it used to be, and unfortunately, that’s the way it’s headed right now. But there have been several efforts to deliver us from the hands of primitive, irrational religion. The first was made by someone named Enki about four thousand years ago. The second was made by Hebrew scholars in the eighth century B.C., driven out of their homeland by the invasion of Sargon II,” “but eventually it just devolved into empty legalism. Another attempt was made by Jesus—that one was hijacked by viral influences within fifty days of his death. The virus was suppressed by the Catholic Church, but we’re in the middle of a big epidemic that started in Kansas in 1900 and has been gathering momentum ever since.” What a thought. Viruses exist in biology, in digital computers and in religions.

It is fifty years since the Supreme Court ended the anti-miscegenation laws and this false boundary called race no longer blocked marriages. As students at EMC in 1960 we cheered as Dean Ira Miller and other faculty accompanied Asian-German class mates to Maryland to celebrate their marriage. Now movies, TV, even our outstanding elected leadership bridge the variations in shade of skin. When Cheerio commercials first risked a multi-color family (remember?) and racists raced to dump their children’s cereal in protest, others cheered Cheerios. Now most commercials ignore hue-taboos. Change comes slowly, but change can come.

Birthdays and Father’s Day deserve home made vanilla with peaches and hot fudge. Correction, double vanilla! Our church gathers four freezers for the MCC sale, and makes 25 mixes to sell for relief. Great tradition. Nero ate it while the Eternal City burned, it is said, made with snow carried from the Alps. A French aristocrat said “Life is short, eat dessert first,” Our recipe begins with a giant dollop of love.

Wind. Yesterday a brush fire a few miles away, perfectly still conditions, extinguished. We talk about the three digit temperatures in our state, we see it is across the continent. The proverbial June gloom of Southern California with fog and cooler days is replaced with bright sun and heat. Heat. Climate change is a reality, (skeptics awake!) Behind our voices we hear Greta Thunberg shouting at the United Nations Climate Actions Summit, “How dare you! You have stolen my dreams and my childhood with your empty words!” Our voices feel similar, small, weak, but still we must speak.

Going beyond “take out” is a topic in many conversations. We compare adventures with friends on which restaurants have outdoor tables with safe social distancing, Our village of Claremont has built dining patios extending into the street that will remain as reminders of a year of caution and “carry out.” Happy families at the next table, the dog curled beneath, have become a common sight. Sun or moonlight and soft breezes are not on the menu, but they are the perfect horderve, We feel like a diver surfacing from a long plunge grateful for the breath after emerging.