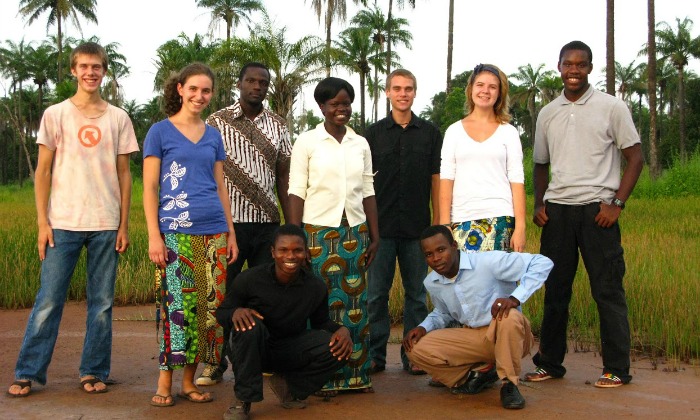 Photo: The 2012 Guinea-Bissau YES team, a blend of West African and North American youth, pose for a photo while on outreach. Nathanael Thorne (back row, right), now a pastoral ministry student in the U.S., traveled to The Gambia in August 2016 to help provide training to Joseph Manneh’s (front row, right) evangelism group, Servants of the Kingdom.

Nathanael Thorne and Joseph Manneh, friends from across the world, didn’t expect to meet again. For 10 months, their 2012–2013 Guinea-Bissau Eastern Mennonite Missions YES team brought together nine missions-minded youth from West Africa and the U.S., including Thorne, from Washington, D.C., and Manneh, from The Gambia.

But this August, a mutual passion for evangelism closed the 4,000-mile distance between the former teammates once again. In April, Manneh, who now leads a youth-based evangelism group in West Africa, asked EMM to send mission trainers to The Gambia. In answer to this request, Thorne, currently a pastoral ministry student, traveled to the The Gambia to help strengthen his friend’s outreach to the people of West Africa from August 2–12, 2016.

Manneh’s evangelism group, “Servants of the Kingdom,” was formed in the past year to fill a need for Christian outreach in The Gambia and Guinea-Bissau. In The Gambia, over 95% of the population is Muslim; in Guinea-Bissau, 50% of people are Muslim, 40% practice traditional animistic religions, and 10% are Christian. Through Servants of the Kingdom, 23 young unmarried men and women have committed to sharing the gospel with the unreached people in these West African countries.

The week of training was largely focused on learning to identify how God is working, and acting as an instrument for what He is already doing, said Thorne and Hatcher. “We need to sow seed in places that will yield a harvest,” said Hatcher, referencing the Parable of the Sower in Luke 8. Topics included developing simple churches, having spiritual conversations in fresh ways, and engaging with “Persons of Peace” — specific people whom God has prepared to hear the gospel message.

Hatcher believes that Servants of the Kingdom is working in an area ripe for hearing the gospel. “Many Muslims in this region are having dreams about Jesus. They want someone to tell them what these dreams mean,” he said. “That’s one essential way that local Christians can partner with God where he is working.”

Manneh was encouraged by the turnout to the seminars — a total of 48 participants over the week. As he plans a new Servants of the Kingdom outreach for September, he will remember the teaching on servant leadership: every leader should always take the posture of a learner, and be willing to pass on their learning to those around them.

As for Thorne, he has one more year in EMU’s STEP program. After that, he is open to God’s leading wherever it takes him — from Washington, D.C., to West Africa or beyond.