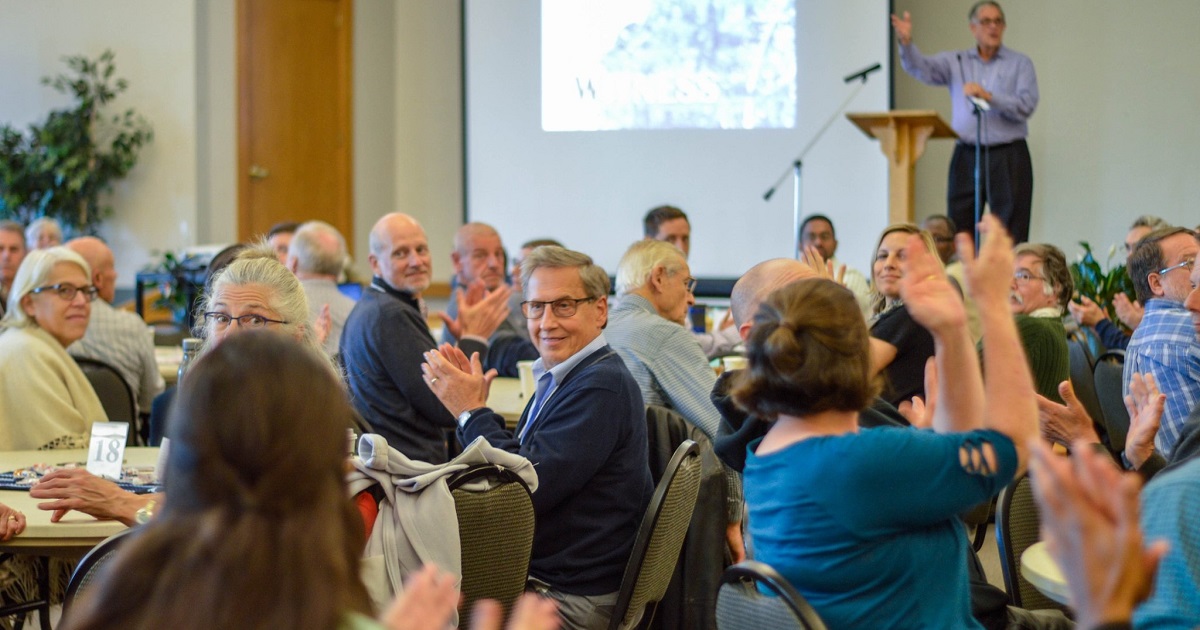 Photo: Delegates from Franconia and Eastern District conferences erupted in applause and song after it was announced that the vote to reconcile was unanimous. Photo by Cindy Angela.

The vote created one of Mennonite Church USA’s biggest conferences—still without a name—and mends a split that took place in 1847.

“A unanimous vote among Mennonites — I didn’t know it was possible,” said Eastern District interim conference minister Scott Roth. “In EDC we had one abstention, but to have everybody saying yes, after all the work, it felt really amazing.”

The union is not being called a merger but a reconciliation, reversing a division that arose from disagreements over disciplinary practices and authority.

Seeking a more congregational structure, churches that left Franconia formed what became Eastern District, laying some of the groundwork for the 1860 founding of the General Conference Mennonite Church, one of the denominations that became MC USA.

While differences about matters such as the confessing of sin and military participation kept the two conferences divided for 172 years, shared geography and ministries kept them connected.

“My license and credentials are held by Franconia,” said Roth, who will stay in his interim role until February and works out of an office at Dock Mennonite Academy, a school in Lansdale, Pa., affiliated with both conferences. “. . . There’s always these points we can come together. I believe people were finally listening to God and realizing this isn’t a healthy witness to God.”

“For me that’s a lot of where the foundation work took place,” said Kriss, who remains in the executive minister role in the reconciled entity. “We got used to working together again in conference-related ministries.”

After the two conferences shared worship in 1997, dialogue continued. They began more intentionally working alongside each other and started holding joint annual assemblies in 2012.

A task force has looked at how to combine two conference cultures into one organization that is both robust and nimble.

“Two conferences came together regardless of their differences in the past, asking one question: How can we make the best conference possible to handle the situation we are in right now of intercultural issues and diverse faith backgrounds? How do you create an entity that is sturdy and flexible to work within that?” Roth said.

“Some people feel EDC is being swallowed up, but that’s not even an issue for us because we want to create the best conference possible.”

Franconia and Eastern District each held a vote Nov. 2 made of three components: to officially reconcile into one organization, to adopt bylaws suggested by the task force and to name individuals to a new board.

After the reconciliation vote was announced to cheering and clapping, all delegates shared communion and sang songs. They were then asked to select from a cairn of stacked river stones at the front of the church.

Each church will paint a stone and bring it back next year for the united conference’s first gathering. The stones will be assembled into a fountain at the conference offices.

“As we grow with church planting and churches joining, we’ll add to the fountain,” Roth said. “There’s living water in the fountain as a conference of churches living in relationship with each other.”

“They have discerned they want to be part of a conference where their pastor can officiate same-sex marriages without re­percussions,” Kriss said.

Kriss said Eastern District brings an emphasis on congregationalism, and Franconia has a tradition of vesting considerable authority in credentialed leaders, who in the past have been automatic delegates for conference decisions. In a compromise, active church participants in the new conference can be delegates, and nothing is automatic.

“It’s a very subtle change, but noticeable for Franconia with how delegates are selected,” said Kriss, who noted the reconciled conference will introduce a cap on how many delegates a congregation can have. “. . . We’ve learned from sister conferences of the value of balance. Both conferences have had that in the past — large delegate bodies from particular congregations.”

Balance is key to creating a welcoming space for immigrant communities reshaping the conferences.

“We have a conference that has six different languages preached on a Sunday morning,” Roth said.

Along with a half dozen languages, the conference stretches from Boston to California, and soon, to Florida.

“The structure and identity group has clearly expressed that conference is not based on shared geography but shared relationships,” Kriss said. “That’s been the history, particularly of Franconia Conference, and for Eastern District as well.”

The combined conference conservatively counts 7,587 people in 57 congregations, not counting at least seven Southeast Mennonite Conference churches that plan to join next year in order to stay connected to MC USA after their conference voted to leave the denomination. Their addition will move the conference past 7,617-member Western District Conference as MC USA’s largest member.

Mennonite World Conference general secretary Cesar García has been announced as speaker for the initial assembly of the new conference a year from now.

“We anticipate continued growth,” Kriss said. “With the reshaping of the structure, it’s anticipating more growth.”