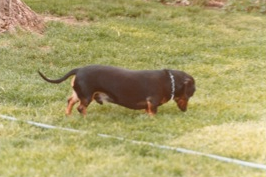 I first set eyes on Fritz, the Mennonite dog, as I drove around Boise, Idaho’s North End, looking for a place to rent in 1990.

A small brown Dachshund swaggered along the sidewalk on 14th Street confident as a sergeant major on parade.

I said to Michael, my husband, “Have you ever seen a dog like that?”

“Keep your eyes out for rent signs, Angie, or we might end up sleeping in a haystack,” he replied.

Finally, I saw a “for rent” sign in front of an older house in the historic district. We called Larry Hauder, the owner who also lived next door.

To sign the contract, Larry invited Michael and I to meet his wife and two children. We learned that Larry was the pastor of the Mennonite church located in the Hyde Park, in Boise’s North End.

With Larry and his wife Becky, we discussed Michael’s sabbatical to Ireland where we presented our research on non-violent solutions to deal with political and militaristic strife. I mentioned visiting with some of brave women involved with “Women Together for Peace” in strife-torn Northern Ireland to give a presentation on “Boise Peace Quilt Project.”

Larry and Becky, I discovered, were both involved in the Boise Peace Quilt project from the start, and participated in making the first Peace Quilt “The Friendship Quilt” sent as a sign of friendship between people in the United States to people in the Soviet Union at the height of the Cold War.

Then the Hauders pointed out they were going out of state for eight days, and invited Michael and I to stay in their house.

I could not believe such generosity to a couple of strangers plus trusting us to take care of the Fritz, the family dog who carsick on long road trips.

The family’s willingness to help us get re-adjusted in Boise left a lasting impact on me. Neither were aware my younger brother Noely died unexpectedly after I got back from Belfast, Northern Ireland. I had a broken heart.

We gratefully accepted their invitation to nest in their home for eight days with their dog.

Then we heard a jingle of dog tags causing the children to jump up saying, “It’s Fritz. He’s home.”

A Dachshund nudged open the door of the living room, trotted over to get petted by his owners, and noticed strangers in the midst.

It was the same dog I saw earlier on waking along the sidewalk on 14th street!

Larry whispered to the dog, “Fritz, that’s Angie and Mike, our new neighbors. They are going to housesit you until we get back.”

The small hound seemed to understand every word as he came closer ever so cool and sat down on the rug opposite us.

After the family took off, Fritz controlled the house. He demanded breakfast at 8 a.m., then licked his chops and went for his morning walk arriving back at midday for his measured amount of dry dog food and water.

He took an evening walk after dinner around the North End, and upon return sat in front of the television barking at the blank screen until we found “Cartoon Time.”

Larry had a barbecue set up on his patio and Michael decided to check it out. One night Michael went to the store and brought back pork ribs, wine, and beer. He marinated the ribs in beer, smoky sauce, brown-sugar and onion juice.

After the slow-cooked ribs were ready, I bit into the tender delicious pork ribs as Fritz salivated and began whimpering.

“Like a little sip?” Michael asked, holding a glass of wine towards Fritz.

The dog gingerly dipped its tongue into the wine, again and again until rapture took hold.

He continued to watch “Cartoon Time” and joined us to watch old movies.

Fritz became laidback. He frequently lollygagged on his back, legs up the air displaying a full belly demanding a rub-a-dub until we told him, “Enough already.”

The transformation of Fritz lasted until his owners returned home with their two adorable children who hugged and kissed Fritz almost to bits. Sad to say, the dog dropped us like a hot Idaho spud or an Irish spud, for that matter!

I wonder if Fritz would recall going with Michael and I on treks to the outdoor patio at Lucky 13th Pizza. He drew an audience yelping along to their rendition of the beloved Beatle’s song, “Yesterday.”

Later, Pastor Hauder exclaimed over our  fence that he got a phone call from the manager Lucky 13 Pizza inquiring if he owned a small Dachshund.

“It’s here on the premise going from table to table looking for pizza and beer. Pick him up or we’ll keep him, “the owner said.

Who would not give the shirt off their back to adopt Fritz, the adorable Mennonite Dog”

We enjoyed living next door to the Hauder family and Fritz for many happy and peaceful years. Fritz gave us a bow-wow-wow now and then and I blew back kisses.

Angeline Kearns Blain was born in Dublin in 1938. She emigrated to the United States in the late 1950s, married and had three sons. After raising her family she enrolled in basic education classes, continuing to university where she earned an MA degree. She was adjunct professor of Sociology and Women’s studies for twenty years at Boise State University, Boise, Idaho. Her publications include Tactical Textiles: A Genealogy of the Boise Peace Quilt Project, Stealing Sunlight: Growing up in Irishtown, and I Used to be Irish: Leaving Ireland, Becoming American.