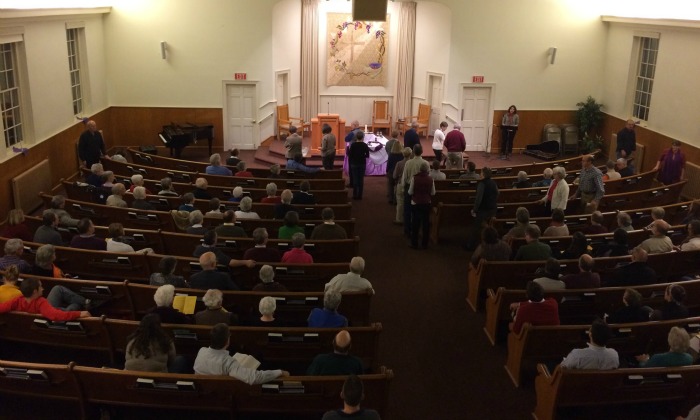 Photo: The Napkin Group, a group of diverse pastors in Lancaster, Pa., drawn together for conversation and spiritual support, was instrumental in planning a Dec. 9 service of lament and confession held at East Chestnut Street Mennonite Church in Lancaster. (Photo by Vanessa Hofer.)

In the spring of 2014, Stan Shantz, Todd Friesen and Brian Miller met, as pastors often do, to catch up.

Over a cup of coffee at Café One Eight, located in downtown Lancaster, Pa., the conversation drifted from day-to-day life to the pressing issues of their respective Mennonite congregations, Lancaster Mennonite Conference and Mennonite Church USA.

Suddenly, Shantz, pastor of James Street Mennonite Church in Lancaster City, had a thought. He recalled a diagram that Kathy, his wife, had brought home from a class she was taking through Fuller Theological Seminary in Pasadena, Calif.

“I said, ‘Let me show you something,’ ” Shantz recounts. On a clean napkin, he drew a horizontal line that divided the napkin in half.

“On this axis, [we note] whether you are liberal or you are conservative.” Shantz labeled the right end

and left end of the line with each term, respectively. “These days, I think there needs to be another access point.”

He added a vertical line from top to bottom, dividing the napkin into fours. He labeled the top end “open” and the bottom “closed.”

Then, indicating the diagram, Shantz asked, “Where would Jesus function in this?”

Taken aback by the diagram, Shantz recalled, that he, Miller, then pastor of Sunnyside Mennonite Church, and Friesen, pastor of East Chestnut Street Mennonite Church, all in Lancaster, agreed they needed “to do something about this.” They invited Lancaster Mennonite Conference bishop Jason Kuniholm to join their next meeting and drew him the same napkin diagram.

And the Napkin Group began.

Meeting every six weeks in various locations around Lancaster, the group has grown to include around a dozen area Mennonite pastors. There are no significant preparations, no membership guidelines and no rules.

Kuniholm, who is bishop for many but not all the participants, serves as the spiritual director. A typical meeting will last around two hours and include conversation, prayer and, always, Communion.

“We were, and continue to be, a theologically diverse group,” Friesen explains, a point that has become particularly relevant leading up to and following Lancaster Mennonite Conference’s recent decision to withdraw from Mennonite Church USA.

“As events unfolded and the proposal came to sever relationships with Mennonite Church USA, we continued to meet and continued to speak and pray for that breaking of relationship not to happen,” Friesen says.

“It’s been a great, safe place to be together, even though we’re on different sides of things. We don’t all agree, but it doesn’t matter at all,” she says.

Service of lament is organized

Emotional support, according to many members of the group, is one of the key components of the Napkin Group.

“I started my ministry in 1981,” Shantz says. “I have never seen so much stress and anxiety among my peers as I have over the last two years. We need these places where pastors can come and experience renewal and safety.”

Sensing a need for additional opportunities to acknowledge the emotions within the church, especially for pastors burdened with the current distress of church division, members of the group began questioning what more could be done.

Eventually, the framework for an evening worship service emerged, with Napkin Group regulars Friesen and Ranck Hower at the helm.

“We were talking about the need to lament, the need to confess, the need to have a place to say, ‘Let’s stop and think about the relationships that have been severed and how we feel about that,’ ” says Ranck Hower.

The resulting service, An Evening Service of Lament and Confession, was held Dec. 9 at East Chestnut Street Mennonite Church.

The service, attend by 125 individuals, looked to the Psalms for inspiration. It was divided into three parts—lament, confession and hope—each framed by song, Scripture and periods of silence.

Participants were invited to reflect on whatever was on their hearts, whether related to the recent church division or otherwise.

It was designed to be a safe, open space—similar to the Napkin Group. After all, of the eight pastors who led the service, six were regular Napkin Group attendees.

It was, in Ranck Hower’s words, “a place to bring the pain to God.”

The Napkin Group will continue to gather.

“We’re meeting in January again,” says Friesen. “I suppose we’ll just keep on meeting and see if a next meeting is desired.”

“I haven’t heard interest waning at all,” Shantz adds, noting both the close friendships that have formed among members and their willingness to welcome others interested in joining.

“I suspect it will continue to be an important ministry around the area,” he says.

Listen to the closing litany from the service of lament and confession: