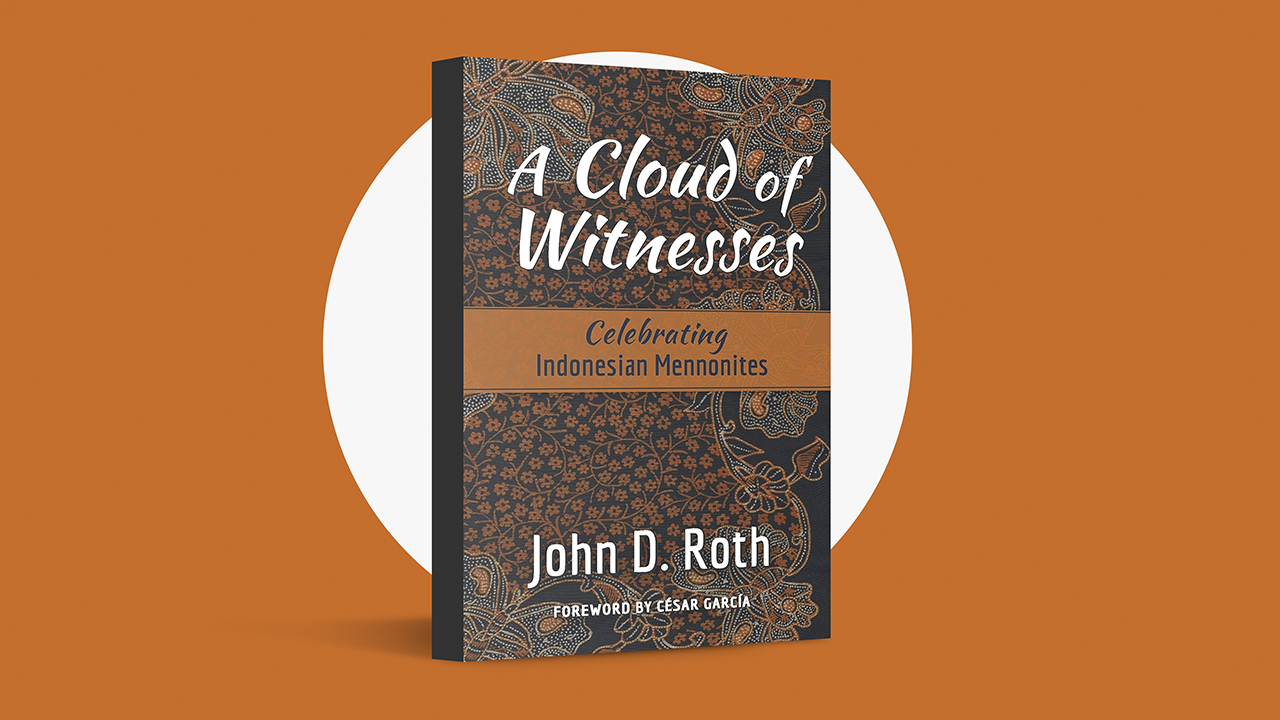 For anyone thinking about attending the 17th Mennonite World Conference global assembly in Indonesia on July 5-10, A Cloud of Witnesses is for you.

Roth, professor of history at Goshen College, editor of Mennonite Quarterly Review and director of the Institute for the Study of Global Anabaptism, has written a handy guide to Indonesian Mennonite churches — their history, their context — while adding practical aids to those traveling there.

The book opens with an excellent summary of the emergence of a global Anabaptist-Mennonite church, specifically the development of Mennonite World Conference. He then addresses the question, Why attend the MWC assembly in Semarang, Indonesia? Among his reasons: to learn more about the global church, to renew friendships, to make new friends, to be renewed and transformed and to discover the cultural richness of Indonesia.

From here Roth offers an introduction to Indonesia, which stretches 3,200 miles along the equator and comprises roughly 17,000 islands. It is the nation with the world’s largest Muslim population, though it includes adherents to other religions, officially recognizing six: Islam, Protestantism, Roman Catholicism, Hinduism, Buddhism and Confucianism. He summarizes the country’s history, including its independence in 1945, after 350 years of Dutch rule and Japanese occupation during World War II.

As Roth recounts the 170-year history of Mennonites in Indonesia, he notes that the standard narrative — which marks its beginning with the arrival of Pieter Jansz from the Dutch Mennonite Mission Board in 1851 and the first baptisms in 1854 — “tends to overlook the complex history of Christianity in Indonesia that preceded Jansz’s arrival and helped shape the identity of the churches that emerged.” The chapter titled “Before Pieter Jansz There Was Tunggul Wulung” makes this point. Ibrahim Tunggul Wulung founded the indigenous Javanese Christian movement in the Muria area before Jansz arrived.

In subsequent chapters, Roth covers the history of the three synods that eventually became members of MWC: the Evangelical Javanese Church (GITJ), the Muria Christian Church of Indonesia (GKMI) and the Indonesian Christian Congregation (JKI). In each chapter, he writes about key individual leaders and focuses on the indigenous churches’ efforts to mature and gain autonomy from the Dutch Mennonite Mission.

One small congregation in Kudus is considered the world’s first organized non-Western Mennonite church, though its relations with the Dutch Mission were sometimes problematic.

The JKI Network, which grew out of a charismatic revival among youth, “now numbers more than 400 congregations,” Roth writes. “Five of its congregations — Jakarta Praise Community Church (18,000 members), JKI Injil Kerajaan in Semarang (5,000), JKI Higher Than Ever in Semarang (5,000), JKI Bukit Zion in Surabaya (2,300) and JKI Maranatha in Ungaran-Semarang (1,850) — are among the largest churches in all of Indonesia.”

However, while JKI in particular is a thriving synod, it faces challenges. Roth names four: 1) Naming and claiming its implicit theology; 2) Balancing the spontaneity of the Spirit with strategic planning and cultural relevance; 3) Keeping its founders’ vision alive; and 4) Balancing the charismatic presence of the Holy Spirit with social ministries and political engagement.

Roth notes that “North American visitors to Indonesia who may find the worship style of JKI congregations overly exuberant should know that most visitors from other Mennonite World Conference churches in the Global South are likely to feel right at home.”

Roth appends his book with a brief travel guide to Indonesia that includes answers to frequently asked questions, such as, Will I need a visa? What’s the weather like? What clothes should I pack? What about electrical outlets, bathrooms, money, food, water? He even includes a list of basic words or phrases in Bhasa Indonesian, the main language spoken there.

He concludes with Indonesian recipes to try at home. This should appeal to more than just those planning to travel there.

While designed for those going to the MWC assembly in Indonesia, A Cloud of Witnesses will be of interest to others simply wanting to learn more about Indonesian Mennonites. Roth is an astute historian, and he writes in a way that’s accessible to the general reader.

Gordon Houser is author of Present Tense: A Mennonite Spirituality.