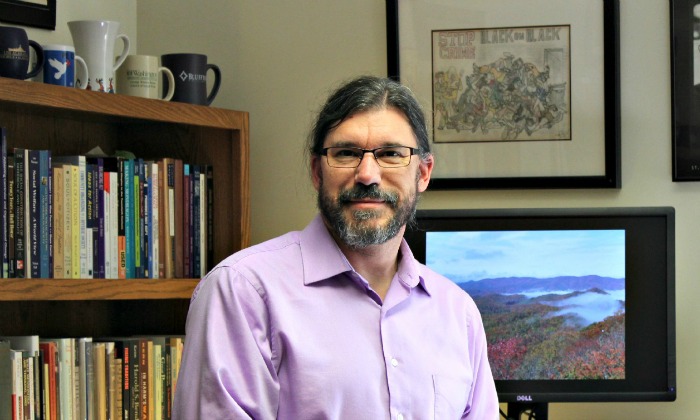 From 1999-2014, 76 unarmed black men and women were shot or otherwise killed in U.S. locations other than Ferguson, Mo., according to Dr. Walter Paquin, a Bluffton (Ohio) University faculty member.

“So why has Ferguson become the flashpoint when this has occurred in so many places?” asked the assistant professor of social work, referencing the Aug. 9, 2014, shooting death of Michael Brown at a campus colloquium March 13. “I believe it is the result of years of pent-up frustration and ongoing harassment at multiple levels.”

Paquin lived and conducted research in the area as a graduate student at Washington University in neighboring St. Louis.

He revisited his study of black suburban neighborhoods last summer, examining changes in neighborhood quality from 1990-2010 through analysis of U.S. Census Bureau data.

He points to an increasingly segregated Ferguson—as “white flight” followed an influx of African-American residents beginning in the ‘90s—and related economic conditions as factors that also helped fuel unrest and sometimes violent protest in the St. Louis suburb after the Brown shooting.

African-Americans in St. Louis began moving to the suburbs in St. Louis County looking for better neighborhoods and educational, as well as economic, opportunities, Paquin says.

And in 2000, for the first time, more African-Americans lived in the county than in the city.

Over the last 20 years, though, white residents have also left many of those same suburban neighborhoods, driving down housing values and helping create segregated communities, he explains.

That has happened in each of the four neighborhoods that predominantly comprise Ferguson, whose population is now about two-thirds black but whose police force remains overwhelmingly white.

“I think what has happened in the county helps us better understand the frustration expressed by Ferguson community members, and members of other segregated minority communities,” following Brown’s death, Paquin said.

Violence in Ferguson increased in November after a county grand jury opted not to indict Darren Wilson, the police officer who shot Brown. Paquin visited the working-class community in December and, at the colloquium, showed photos he took of businesses that had been burned.

His photos also included shots of spray-painted messages of hope, including “Believe There Is Good In The World” and “Even In The Darkest of Nights There is Hope.”

The U.S. Department of Justice agreed with the November grand jury finding in a March 4 report.

On the same day, however, a second DOJ report outlined racial profiling in the Ferguson police department, as well as a profit-driven municipal court system primarily targeting black and low-income residents.

The latter report—which precipitated the firing of one and resignations of several Ferguson officials—pointed out “an environment of discrimination and ongoing harassment” in the community, Paquin said.

“But I think we are also able to see it in the increased isolation and segregation black families experience as they attempt to seek a better life in suburban neighborhoods,” he continued, noting that the same thing has occurred in Ohio. “The indication from previous residents is ‘we do not want to live near you,’ and they exercise that sentiment by moving. For the police and municipality, this is evidenced in ongoing harassment, fines, arrests and even killings.

“If a group is pushed enough,” he added, a reaction like the one in Ferguson “is one possible outcome of that segregation.”

Now in his fourth year at Bluffton, Paquin earned his master’s and doctoral degrees from Washington University’s George Warren Brown School of Social Work. His doctoral dissertation was titled “When City Renters Buy Homes, Do They Buy in Better Neighborhoods?”

Last year, he received a Bluffton University Research Center grant for the follow-up project, “Do Black Neighborhoods Remain Stable? Revisiting Black Suburban Neighborhoods.” He is now finishing an article related to his work and is making a conference presentation about it in April.