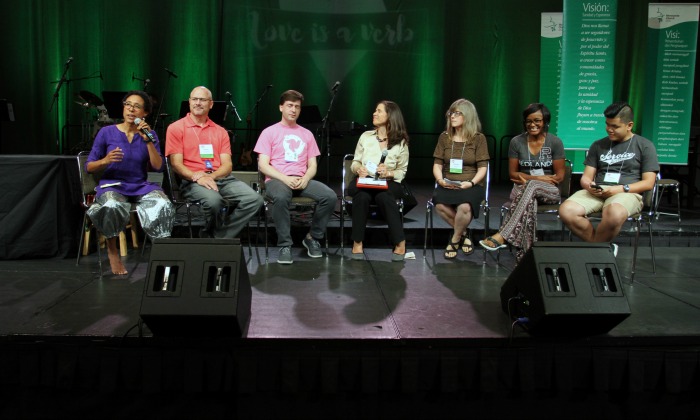 The much-anticipated Future Church Summit (FCS) began on Thursday afternoon, July 6, as Patricia  Shelly, moderator of Mennonite Church USA, opened with prayer. She talked about the MC USA Purposeful Plan that was affirmed by delegates as a guiding vision for the church at Pittsburgh 2011. Now, she said, “we need further guidance from the church.”

The Executive Board decided to hire Catherine Barnes, who helps design and lead deliberative dialogue and teaches at Eastern Mennonite University’s Center for Justice and Peacebuilding in Harrisonburg, Virginia. She is a Quaker.

Barnes explained that the process is designed around a series of open questions. First, people at table groups will talk about what is most important to their faith.

Participants were assigned into working groups at 97 tables throughout the hall.

In an opening exercise, Barnes asked participants to respond to the following:

Later, the group focused on church history. Barnes said, “Our imagination about our future is affected by what’s happened in our past. We need to be aware of our past before we can imagine our future.”

She asked participants to respond to the question, What were significant turning points in the church’s past?

Leslie Francisco, Jason Kaufman, Erica Littlewolf Regina Shands Stoltzfus andJohn Roth reflected on a timeline displayed at the front and highlighted events throughout the church history. Earlier in the week, the timeline was on display in the convention exhibit hall and attendees were encouraged to write in key events in the church’s history.

Barnes noted after the presentation that Latinx history was not included well during the presentation and apologize. Barnes reported that historian Felipe Hinojosa was supposed to be part of this presentation but was ill and could not attend.

“We (Hispanic Mennonites) are here; we are not invisible; we are pastors, educated, women, youth. We love the church; we serve others; we are the people of God, and the people of God have many colors,” said Iglesia Menonita Hispana moderator Sandra Montes Martinez.

Todman Moore reported for the team on the question, What draws us to this faith? She said three themes were predominant in feedback from table groups:

Pitts reported on responses to the history question. The first three themes were these:

On Friday morning, July 7, Jessica Schrock Ringenberg, a pastor at Zion Mennonite Church, Archbold, Ohio, led a prayer that division not be present in the room. At a meeting of the Constituency Leadership Council, a group of leaders from area conferences and constituency groups across MC USA, Schrock Ringenberg had taken shards of pottery that participants held to represent their brokeness and put them together into a mosaic. “God brings together all the inconvenient pieces,” she said, and these represent all of us. God wants everyone in the world to come together. “We won’t be done until we move into the world [to bring God’s love.]”

Later, Barnes introduced a “spiral exercise,” which involves four people at a time sitting in a circle. After one person talks, he or she leaves, and another one joins the circle. THis was part of plenary session where individuals had a chance to address the entire FCS group.

Among the many comments were the following:

Next, the theme team reported on the responses they’d received regarding historical laments and affirmations.

Roeschley named the following laments: There was an overwhelming response around racism in our church. At the top of the list was boundaries that exclude people. Also listed was complicity in colonialism and assimilation; painful patterns of splitting, divisions, clique-ish mentalities; stories that are not honored or heard; assimilation to white Mennonite culture is used to deal with difference; passive-aggressive avoidance of issues; misuse and abuse of power, including sexual abuse and institutional power; marginalization and violence against people of color, women and LGBTQ people; failure to fully merge into one body as Mennonite Church USA; complicity in the silence of our processes and systems that cause harm; and the declining focus on the Holy Spirit and our own spirituality.

Gascho reported that the theme team received 1,254 affirmations. Among them were the following: we are in process together; we are a Jesus-centered community that discerns the moving of the Spirit; we say no to war and yes to peace; we seek to be the church in the world and to be mission minded; we acknowledge our failure to be inclusive; we encourage women’s gifts; and we seek nonconformity to empire through simple living, speaking truth and “our own quirkiness,” according to more than one response.

The next exercise was a “Samoan circle,” which involves a group of six people sitting in a circle and conversing during a plenary session. People can move out of the circle after they speak. Barnes asked people to come to the front and respond to the following questions: What are the implications of our diverse identities within church? Can we live with our differences? Do we choose to do so?

J.B. Miller said a diverse church helps us love each other in positive ways.

Alisha Manning said we risk making the same mistakes as we’ve made in the past if we don’t take strategic efforts to work at change, to make inclusivity a priority, be respectful of other cultures and give them a seat at the table.  We also need to focus on creation care, she said.

Sarah Thompson said, “I’ve been inspired by the fact that there are two sets of 10 commandments in the Bible.” She said the inconsistency used to bother her, but now she welcomes it and that it illustrates that God speaks to us in our different contexts. “There is always something to learn from others,” she said.

Kevin Goertzen said that although his congregation is almost all white, it is very diverse in other ways. “Diversity is hard,” he said. “You have to hold things in creative tension.” Diversity is hard but also beautiful, he said. “If we only relate to people who agree with us, we’re going to get smaller and smaller.”

Phoebe Sharp said, “I think about the commonality we have  and I’m concerned and frustrated about the absence of creation care in our concerns.”

Cyneatha Millsaps acknowledged that while many forms of diversity had been named in conversation, “No one has spoken about the poor, yet God speaks about the poor over and over.” They are silent here, she said.