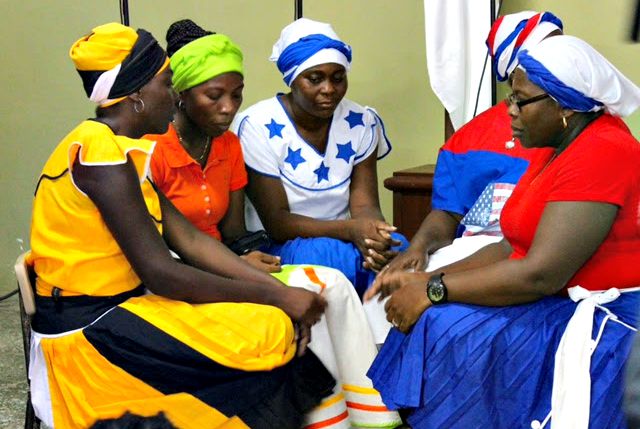 Twenty-five years ago, a small group of thirty Garifuna believers met for mutual encouragement and inspiration. In 2015, more than a thousand Garifuna church leaders and believers met for the twenty-fifth meeting of AMIGA (Garifuna Missionary Association) in Corozal, Honduras.

“Never would I have imagined there would be this kind of growth,” said Steve Shank, pioneering coach at Eastern Mennonite Missions (EMM). “The thirty people at that first meeting were the only Garifuna Christians we knew of existing among a population of almost 300,000.”

Shank said the original idea was to get the few Garifuna Christians they knew of together for mutual support and prayer.

“At that first gathering, we unfolded a map of the Garifuna nation and identified where there were Garifuna communities,” Shank said.

“People said ‘let’s do it again next year’ so they formed a committee and met in Trillijo, Honduras, for the second meeting. Seventy people came the second year. Once again they unfolded a map of the Garifuna communities and prayed over them.”

The third year, the last gathering Shank attended, was also in Honduras and completely planned and funded by the Garifuna leaders.

This year the two-day convention took place in the same location as the first gathering a quarter of a century earlier in Corozal, Honduras. This time, however, it was held at the large Corozal Garifuna Church.

Several dozen church leaders from all different locations of the Garifuna nation spoke at the convention. “I believe every Garifuna church in the U.S. was represented,” Shank said.” This was not a specifically a Mennonite conference but was for all Garifuna believers in Jesus although the majority of leaders were from Mennonite churches.”

“Worship songs were sung that were written in their own language and Garifuna Christian recording artists performed,” Shank said. “The sessions started at 6:30 a.m. and ended at 8:30 p.m. They were packed full!”

“It is a time where the Garifuna come to pray for their nation, to be inspired by teaching and preaching, to worship in own language, and to plan to plant more churches.”

Shank said the conference is always held in the beginning of July. Each year it is held in a different Garifuna community. The conference ends with the attendees singing and praying through the town as a closing ceremony.

“We are thankful for this movement that has happened and continues to grow. The reason for this event is to celebrate what God is doing among us,” wrote Nino Amaya, president of AMIGA, in the convention program.

Shank and his family served in Dangriga, Belize, among the Garifuna from 1979 – 1984. The Garifuna were largely an unreached people group with less than one percent being Christian. An animistic people group, the Garifuna suffered discrimination and persecution. “Women have an interesting role in the Garifuna culture, they are farmers while the men usually work as fishermen. Witch doctors, or buyeis, tend to be women.”

The Garifuna, an indigneous people group, are descended from West Africans who were taken as slaves to St. Vincent and intermarried with the Arawak people. When they were forced to leave St. Vincent by the British, they went mainly to Roatan Island in Honduras and later settled along the coasts of Belize, Guatemala, Honduras, and Nicaragua. Now there are Garifuna communities in New York, New Orleans, Miami, Dallas, Houston, and Oregon.

Shank and Steve Morris were invited to the 25th anniversary and honored. Morris was a student at a Bible institute where Shank was teaching in the States. “He shared the vision and had the calling to work among the Garifuna,” Shank said. Morris served in 1985 to 1991.

Both Shank and Morris were invited to the twenty-fifth anniversary of AMIGA to be honored and speak. “I don’t do honors very well” Shank said. “I shared how it all started and my dream. I gave thanks for what God has done. Then I asked them, ‘What will you do about the other Garifuna villages that don’t know about Jesus? What will you do about the West African villages your ancestors came from?’”

“A dozen people in their 20s and 30s stood on their feet in response and later a half dozen approached me and asked for training to go,” Shank said. “Garifuna Mennonite leaders from New York City are sending missionaries to plant a Garifuna church in El Triunfo, Honduras, and to start a training center there to prepare Garifuna missionaries to go to the world.”

Shank recalled a time when he was living in Dangriga, Belize, and was traveling to speak to a group out in the country. His truck stopped at mileage marker 33 in the middle of nowhere. He got out, tried to fix it, finally gave a kick to the tires, got back in and the truck started. When he got to the village, the meeting was breaking up but they knew what happened.

Shank explained why he was so late but the group matter-of-factly stated they knew. “Your truck broke down at mileage 33 and you got out and kicked the tire. We prayed and that’s why you’re here.”

“I was stunned. This didn’t seem at all unusual to them. The Garifuna are very open to the spiritual world; it is more real to them than the material world,” Shank said. “And that’s the way it’s supposed to be for Christians.”