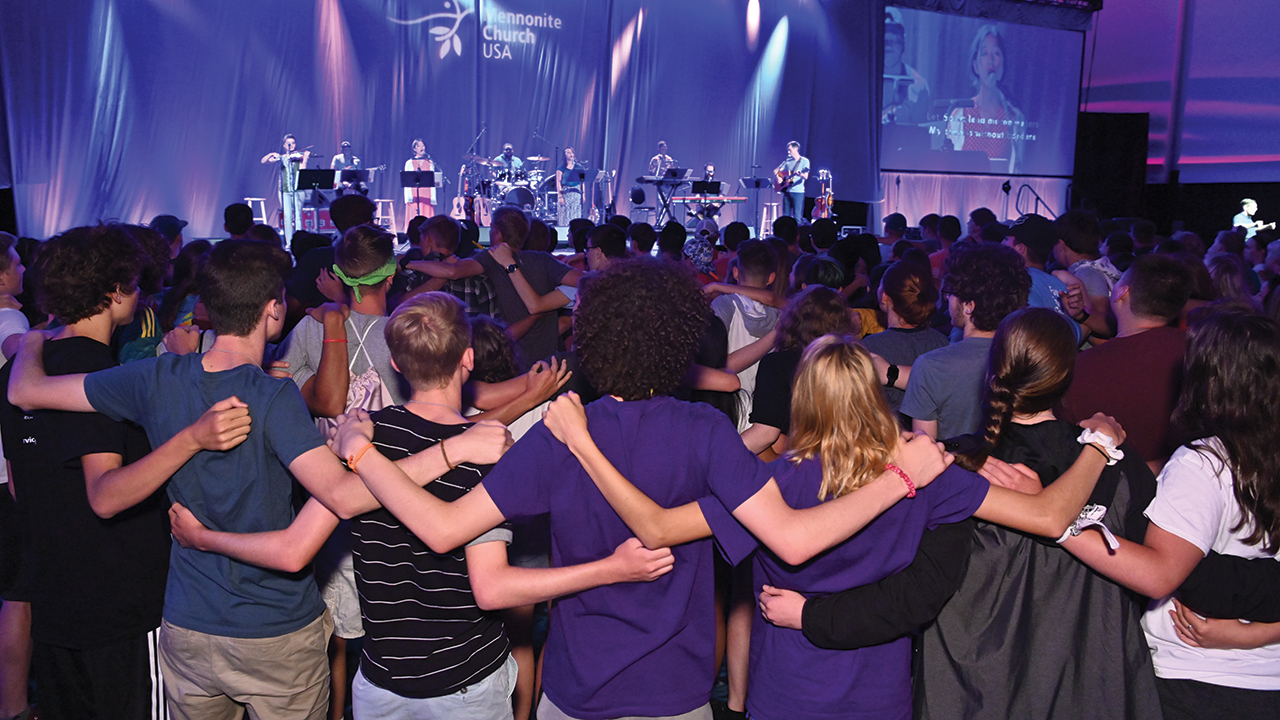 A new report based on a survey paints a picture of the beliefs, priorities and churchgoing habits of Mennonite Church USA’s most engaged and committed members.

The report acknowledges its limits. Because the survey relied on voluntary responses rather than scientific sampling methods, the data cannot be used to describe the denomination as a whole.

Glen Guyton, the denomination’s executive director, said in a news release that while the data may not entirely represent all the experiences of MC USA’s members, it “provides us with important insights, especially as we consider the role of program agencies and the priorities of the denominational staff.”

The full report is at mennoniteusa.org.

A strong majority of participants indicated it is “very important” to follow Jesus in daily life (84%), express Christian love in relationships (80%), embody peacemaking (76%) and serve others outside the church (75%). The faith commitment of adult baptism is “very important” to 51% of respondents. Living a simple lifestyle is a priority for 36% and nonconformity for 30%. Evangelizing nonbelievers was ranked very important by the fewest respondents (18%).

The MC USA news release addressed evangelization’s low priority by pointing out that the preferred mode of outreach for 70% of respondents is service.

“We need to do better at reaching out and sharing our faith locally,” Guyton said in the release. “Our approach to missions is not just international. We must become missional people that impact the community. There is a desire for that in our denomination.”

He emphasized leaning into the basic tenets of Anabaptism, rather than popular religious rhetoric, and focusing on ministry in local contexts.

In an Oct. 21 presentation about the survey to MC USA’s Constituency Leaders Council, Guyton added: “People want to serve. People want to get engaged. People want to do ministry where they get their hands dirty, where it touches other people’s lives.”

In the presentation, he summarized recommendations for denominational leaders: to govern for the future, work with underrepresented groups toward inclusion, empower diverse leaders and continue to provide resources and guidance to conferences and congregations.

Conrad Kanagy, a sociology professor at Elizabethtown College in Pennsylvania, conducted a third survey in 2006 of MC USA, four years after the merger of the Mennonite Church and General Conference Mennonite Church established the new denomination. The EMC, Mennonite Brethren and Conservative Mennonite Conference declined to take part in that venture, known as “Road Signs for the Journey,” although the Brethren in Christ U.S. participated.

Kanagy has reflected on the 2006 and 2021 studies on his blog, ­centerforpropheticimagination.org.

“We were very cognizant [in 2006] of the two former studies [in 1972 and 1989] and their methods,” he said in an interview. “We tried to methodologically line up with how they did their sampling.”

Based on Springtide’s report, Kanagy said no comparisons should be made to earlier surveys because the methods and samples are so different. This is due to the 2021 study’s “convenience sampling”: an invitation was sent to people who had signed up to receive emails from MC USA or attended the 2021 convention. Springtide was present at the convention to reach youth and young adults. Any other participation came from people who heard about the survey, which was available in English and Spanish, and sought it out.

“It’s useful to describe the sample of the people who responded,” Kanagy said of the 2021 survey. “Beyond that, I just don’t think legitimately any comparison can be made.

“Eighty percent of the sample has a bachelor’s degree, but I know that 80% of Mennonite Church USA does not have a bachelors’ degree. That’s just not possible. . . . [The 2021 sample] was more highly educated, older, whiter than the sample I worked with. I can’t say it tells me anything about the denomination as a whole. It’s not a probability sample.”

Sixty-four percent of the survey’s participants indicated they had attended a national adult assembly, and 50% had attended a Mennonite college or seminary — proportions atypical for many congregations. Nearly a quarter of respondents (23%) are licensed or ordained ministers. About 85% of respondents indicated they are heterosexual, whereas Gallup reported in February that LGBTQ identification in the U.S. was 7.1%.

Who are we hearing?

This survey provides interesting information about a sample of mostly white, highly educated Mennonite Church USA members over 40 who grew up in the Mennonite church and are currently highly active in their congregations. While it is disappointing and surprising that the survey is not more representative of MC USA membership, the data presented does shed some light on the habits and views of the survey respondents.

Personally, I resonate with many of the respondents’ convictions. Commitment to an ecumenically minded church that prioritizes peacemaking discipleship is what attracted me to MC USA. As a theologian, I am glad to read that the majority of re­spondents value Mennonite theology and that many believe Jesus-­centered theology has an important role to play in the denomination’s future.

At the same time, I see these survey results as cause for reflection. White, highly educated Mennonites over 40 have overseen the halving of the denomination in the 20 years since its founding. Are this group’s theological and organizational impulses the best guide to the denomination’s future? What does this group have to learn from the perspectives of MC USA members who are not well represented in the data — members who did not grow up Mennonite; immigrant members; African American, Latino and Asian American members; members who did not receive higher education; members under 40; members who are not as engaged with the church in the traditional ways the survey tracked?

These questions are highlighted in the respondents’ relative lack of interest in global partnerships (only 34%). The political issues this group professes to care about are highly ­global: climate change, racism, economic injustice, to name a few. Moreover, Mennonite churches are growing throughout the Global South.

How can respondents face global issues through global partnership? How can white, highly educated ­Mennonites come to see themselves as a small part of a global family of faith? What can this group learn from other family members?

Respondents indicate they have a will to address these questions when they emphasize the need for inclusion. As the denomination’s recent history suggests, inclusion is difficult in practice. The survey points to an awareness of this difficulty without many clear answers.

The good news is that white, highly educated Mennonites over 40 are not the only ones to face these challenges. Much can be learned from other MC USA members and from other Christians seeking to witness to the Prince of Peace.

Ninety-two percent of respondents are white, and 75% are at least 45 years old.

The data suggest the survey’s participants are similar demographically to national assembly delegates, who are some of MC USA’s most engaged members. Two percentages correlated closely: At a special delegate session in May, a resolution affirming the spiritual gifts of LGBTQ people and committing to inclusive actions passed with 55.7% approval. In the survey, 57% agreed that MC USA should allow ministers to officiate weddings of LGBTQ people.

While the survey showed the local church plays an important role in the lives of its active members, Kanagy believes more useful information could be learned from those who’ve left the denomination or dropped out of congregations.

“What I saw in the reporting was a failure to recognize the dramatic changes that have taken place in the denomination in the 16 years since our survey,” he said. “The drop from 109,000 to 56,000 [members] has shifted the denomination dramatically. . . . What I saw was a glossy response to what should be more lament than celebration. Multiple conferences are still discerning what to do. Multiple congregations are discerning.”

Kanagy said he would not have stepped into the conversation if Springtide’s report had not included comparisons to earlier data. He suggested a survey of a denomination’s “most engaged” individuals upholds the status quo.

“We’re making the assumption these are the most engaged constituents. They could be most engaged on a particular social issue,” he said. “It’s like the annual business meeting at church. Who shows up is based on what’s on the agenda and who has a stake. It’s not going to be the single moms and the homeless. . . . It seems to me we have to look beyond ourselves, or we will make recommendations and policies that reflect who we already are.”

In a response to questions from Anabaptist World, Guyton said the study’s primary purpose was not to make comparisons to the past but to understand what drives engagement. He said MC USA leaders felt Springtide brought expertise in sociological research that best fit the denomination’s goals, including experience working with young people in religious settings. He could not say what the organization was paid because “MC USA does not divulge what it pays specific vendors.”

Guyton said it was “exciting to see that participants consistently expressed a desire to draw the circle wider — by defining the term ‘Mennonite’ more broadly.” He was encouraged by interest in ecumenical “antiracist efforts, advocacy for immigrants and peacemaking that is inclusive of all.”

The survey points to next steps for systemic change, Guyton said, including the need to incorporate diversity into strategic planning, from congregations up to the Executive Board. This includes allowing immigrants and people of color to have true decision-making power, creating full-time positions for qualified people of color in organizations, being “transparent in operations and communications to disable hidden power structures” and creating mentorship opportunities to increase the number of racial/ethnic pastors and leaders.