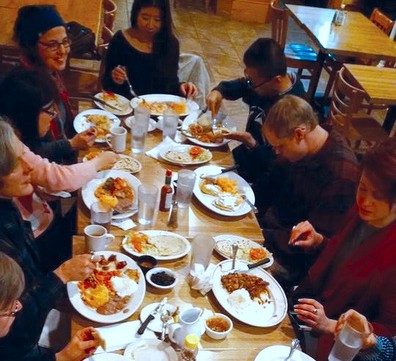 The newest pastor at University Mennonite Church in State College, Pa., never seems to be in the actual church building, and the advisory team that relates to him doesn’t mind.

In what is likely the first Mennonite ministry of its kind, 3rd Way Collective and UMC campus minister Ben Wideman operate almost exclusively on the campus of a massive state university.

Pennsylvania State University is among of the biggest universities in the country, counting more than 46,000 students on its main campus. It has more than 60 student faith groups but none with Anabaptist distinctives.

“We see this void as peace, justice and faith. There are people tackling peace and justice issues, but not from a faith perspective,” said Wideman, who started a three-year term in October.

Though University Mennonite Church toyed with the idea of calling its project Anabaptist Campus Ministry, a wider vision came into focus: being rooted in the Gospels while inspiring students from all faith traditions.

“There’s this huge movement to the party scene. It’s the easiest way to feel like you belong,” said Wideman, an alumnus of Eastern Mennonite University in Harrisonburg, Va. “The second easiest way is in the Christian bubble of the evangelical scene. And if you don’t fit into one of those two bubbles, you can feel really, really alone.

“We’ve sort of joked that we hope 3rd Way can fall into that third space with this alternative that is neither ‘a’ nor ‘b’ and a little bit different.”

Though the ministry is still finding its way, Wideman has developed a series of activities in which there may be little or no overlap among the attending students. The Monday night conversation group is different than the Wednesday morning global peace meditation group. Graduate students have a regular pub night or home-cooked meal, and another group gets together for service projects.

The collective partnered this spring with other groups to bring Christian writer and speaker Shane Claiborne and RAWTools, an organization that turns guns into other objects, to campus for an event.

“It’s two miles from campus to church, but it may as well be two hours for students who just don’t get off campus very much,” Wideman said. “3rd Way Collective doesn’t do anything at UMC. I am empowered to be on campus 100 percent of my time.”

Wideman produces a podcast called Peace Signs, which interviews students and faculty from diverse theological backgrounds about why peace and justice is important.

One Penn State faculty member with exceptional interest in the collective is Jim Rosenberger, a UMC member who has championed the idea of campus outreach since he and former pastor (now Anabaptist Mennonite Biblical Seminary professor) David Miller started organizing Anabaptist Congregations in Secular Education Settings gatherings at Mennonite Church USA conventions eight to 10 years ago.

Wideman attended Rosenberger’s workshop at the Phoenix convention two years ago. At this July’s Kansas City convention, they will present together.

A statistics professor, Rosenberger felt the odds were good that Penn State students would be attracted to Anabaptist values.

“We discussed it a few times at the Mennonite Education Agency, but it’s a small agency and it doesn’t have the resources to reach out way beyond to these big university settings where there are just a few Mennonites,” he said. “So we needed an idea that would be more ground-up.”

A small group from UMC kept the idea alive and gathered donors who would contribute resources to get a ministry off the ground. It was a sizable undertaking for a church of about 100 attenders.

“The church was started as an outreach,” Rosenberger said. “We’re 50-plus years in town, but over the years even identifying the Mennonite students on campus has become more difficult with changes to student privacy laws.”

To give a campus minister necessary continuity, UMC gave Wideman a three-year contract.

“We’re still trying to figure out what 3rd Way Collective will be,” Wideman said. “After one year it’s pretty clear we have started to address a need on campus.”

To sustain the vision, Wideman and the church are looking at other partners, be they local non-Mennonite congregations, distant Anabaptists or other groups.

Like starting a business or planting a church, it’s a risky venture, and the result won’t necessarily be more bodies in the pews on Sunday morning.

Rosenberger, who knows a thing or two about statistics, said this kind of success can’t be measured “in an easy, quantitative way.”

“I’ve pointed out that Dick Thomas, the former moderator of Mennonite Church USA, is probably a Mennonite because our congregation existed when he was a Penn State student,” Rosenberger said. “You have to look way down the road to ask if we impact students’ lives.”