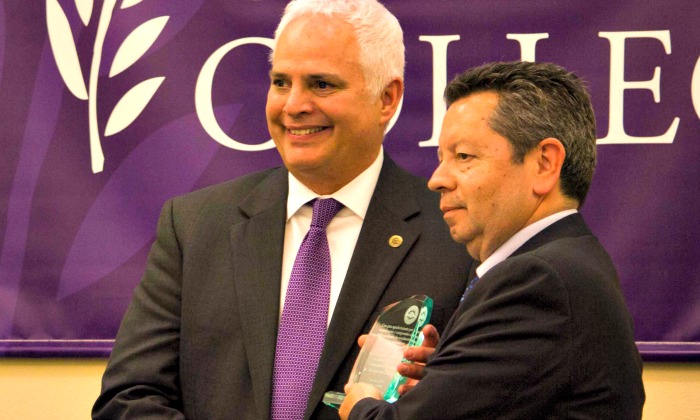 Goshen (Ind.) College celebrated its intercultural teaching and learning community and its growing relationship and friendship with the Mexican government at a campus reception and celebratory dinner May 7, 2015.

Gilberto Pérez Jr., the college’s senior director of intercultural development and educational partnerships, said the activities were held to thank Jorge Sánchez Cataño, Mexico’s consul in Indianapolis. Sanchez facilitated the gift of $20,000 in scholarships—matched by $20,000 from the college—for Mexican heritage students last fall.

Goshen College was the only Indiana college selected in 2014 to receive such scholarship aid from the Mexican Consulate. Pérez said the consulate recognizes Goshen’s work in welcoming and supporting Latino students and has a keen interest in fostering such educational exchanges as bringing Mexican students to study at the college.

Together, the reception and dinner on May 7 drew together more than 125 people from the community, including students and their parents, Latino community leaders, business owners, elected officials, educators and representatives of non-profit organizations.

The dinner featured comments from Goshen College President James E. Brenneman, two Latino students who have thrived at Goshen College and an alumnus who is teaching English to immigrants in Goshen.

After hearing the inspirational stories of two of the 14 Goshen College students who received the scholarships, Consul Sánchez expressed appreciation to Goshen College and pledged continued collaboration and support for students.

“It was such a pleasure to hear the manner in which the students who received scholarships from the Mexican government expressed themselves and, the truth is, it motivates us to continue getting more funds for Goshen College,” Sanchez said in Spanish. “We need more Latino leaders in the future; we need more students who will not abandon their studies and will continue to study and prepare themselves professionally.

“We need them in all fields, from the government to the private sector, and as entrepreneurs and scientists and researchers. Their dedication and hard work will without a doubt profoundly impact the development of their careers, their families and their communities. And as they have shown us, Si se puede – Yes, it can be done!”

Also offering support for Goshen College at the dinner was Arturo Maldonado Tapia, the cultural affairs director for the Mexican Consulate in Chicago. Maldonado said he was impressed by Goshen’s students of Mexican heritage and the college’s outreach to the community.

Mexico has 51 consulates in the United States and two of the busiest are in Chicago and Indianapolis. Together, the two offices serve the needs of 3.5 million Mexican citizens living in the states of Indiana, Illinois, Kentucky, Ohio and southern Wisconsin.

As part of that effort, Brenneman announced that the college will host a Latino Scholarship Banquet on Sept. 24 to provide more financial aid to students. He also announced that former state Rep. Rebecca Kubacki of Syracuse has agreed to serve as co-host of the banquet.

“Scholarships make all the difference in the world for our students. As a first generation college student myself, I know this by experience. I would not be here today if it weren’t for the generosity of others through scholarships,” Brenneman said during the celebration dinner. “And thanks to these scholarships, I know our students will make significant contributions after they graduate. Perhaps, one of them will come back to be president of Goshen College one day or serve as a diplomat of the United States or of Mexico.”

Brenneman said that Goshen College’s enrollment is increasingly diverse; during the current academic year, 32.5 percent of students are minority or international students (from 25 countries). The president said diversity is helping the college realize its vision of becoming an influential leader in liberal arts education focusing on international, intercultural, interdisciplinary and integrative teaching and learning.

“I can think of no greater privilege and challenge in life than to help my alma mater become a beacon of intercultural teaching, learning and leadership,” Brenneman said. “And I believe without question, we are especially called to reach out to our growing immigrant Latino population.”

Latinos made up 14.1 percent of Elkhart County’s population and 28 percent in the city of Goshen, according to the 2010 U.S. Census, Brenneman said. And Latinos now make up 50 percent of students enrolled in Goshen Community Schools. While the Latino workforce is helping improve Indiana’s economy, Brenneman said Latinos need greater access to higher education to make even more significant contributions.

“Ours is not simply an economic argument; it is also a moral and spiritual one that will help to create the beloved community described in Holy Scripture,” Brenneman said. “The gracious fact that the world has migrated to our doorstep requires us to act. As a pastor and educator, my logic is simple, ‘What would Jesus do?’

“We believe that to whom much is given, much is required and we have been given much at Goshen College. Our campus has been positively transformed as we have increasingly become a beloved and intercultural community.”

Hearing student voices
Other speakers at the dinner were Veronica Romero, a junior nursing major from Elkhart, Aranza Torres of Waco, Texas, who graduated last month from Goshen with a bachelor’s degree in social work, and Edgar Saucedo-Davila of Goshen, who just completed a master’s degree in intercultural leadership. All three spoke about the difficulties of being Mexican immigrants, expressed appreciation for their Goshen College education and discussed their dreams of helping others.

Romero said that it has been a struggle for her, academically and financially, to remain in college, but that she remains focused on becoming a nurse and serving other Spanish speakers. “I want to be a voice for the Latino community,” she said. “I want to make a difference.”

Torres said that her parents moved to central Texas from northern Mexico before her third birthday. “After seeing the possibilities and all we had to gain here, my parents made the incredibly difficult decision to remain in this country and overstay our visas, something I am thankful for even through the obstacles and discrimination I have faced as an undocumented immigrant,” she said. “Not a day goes by that I don’t think about what it means to be undocumented, but not once have I regretted the decision my parents made.”

Despite the challenges, Torres said that she has thrived at Goshen College academically while participating in many extracurricular activities and service projects. Yet, Torres said she has not forgotten the sacrifices her parents made or her Mexican heritage and culture.

“Because of the values instilled in me by my parents, and given my experiences as an undocumented immigrant and a Latina, my desire is to continue to serve those around me, especially the Latino community. I aspire to help make a difference, which is why I chose to study social work. I would like to help make the journey easier and more welcoming for the talented Latinas and Latinos who will come after me.”

Saucedo-Davila talked about the frustrations of moving to North Manchester, Ind. when he was 12 years old and struggling with language and identity issues. Not knowing English made him feel deaf, mute and lonely; he was the only minority student in his school. He gradually learned English and then moved back to Mexico, but said he no longer felt at ease because he was considered more American than Mexican. Eventually, he found his way to Goshen High School and then Goshen College, where he thrived.

“Living in two worlds, two countries, two cultures and two ways of life shaped who I am today,” Saucedo-Davila said. “Coming from a family and culture where both hard work and la familia (family) are valued. I can say that I am a hard worker. I am not easily discouraged and still care for those I love and those who are impacted by my decisions.”

Today, Saucedo-Davila works as an English as a New Language teacher at Goshen Middle School, and helps oversee the instruction of hundreds of students, many of them immigrants. He said he is in a good position to help students like himself – to make them feel welcome in the community and inspire them to succeed – as well as help non-minorities understand the struggle and culture of Mexican immigrants.

“I am glad I can be the bridge for both worlds to connect and create a stronger bond between the two,” Saucedo-Davila said. “I consider myself to be bilingual, bicultural and intercultural, through my leadership master’s degree, and I’m able to find resources and help those people around me.”

Saucedo-Davila said that he got a college education and became a successful teacher because of the persistence and assistance of his parents, his teachers at Goshen High School, his professors at Goshen College and his teaching colleagues. They shaped what he has become and instilled in him a desire to help others.

“I just hope that I can inspire more students of Mexican and Latino heritage and any other student in my path because these are my students,” he said. “If I was able to overcome the obstacles of not knowing the language, not knowing the culture, always being afraid of what other might think of me, I think anyone else can do it, too. I believe others with similar backgrounds can do it. And I can’t wait to see more people of Mexican and Latino heritage to become professionals and help me improve the community that we have here in Goshen.”