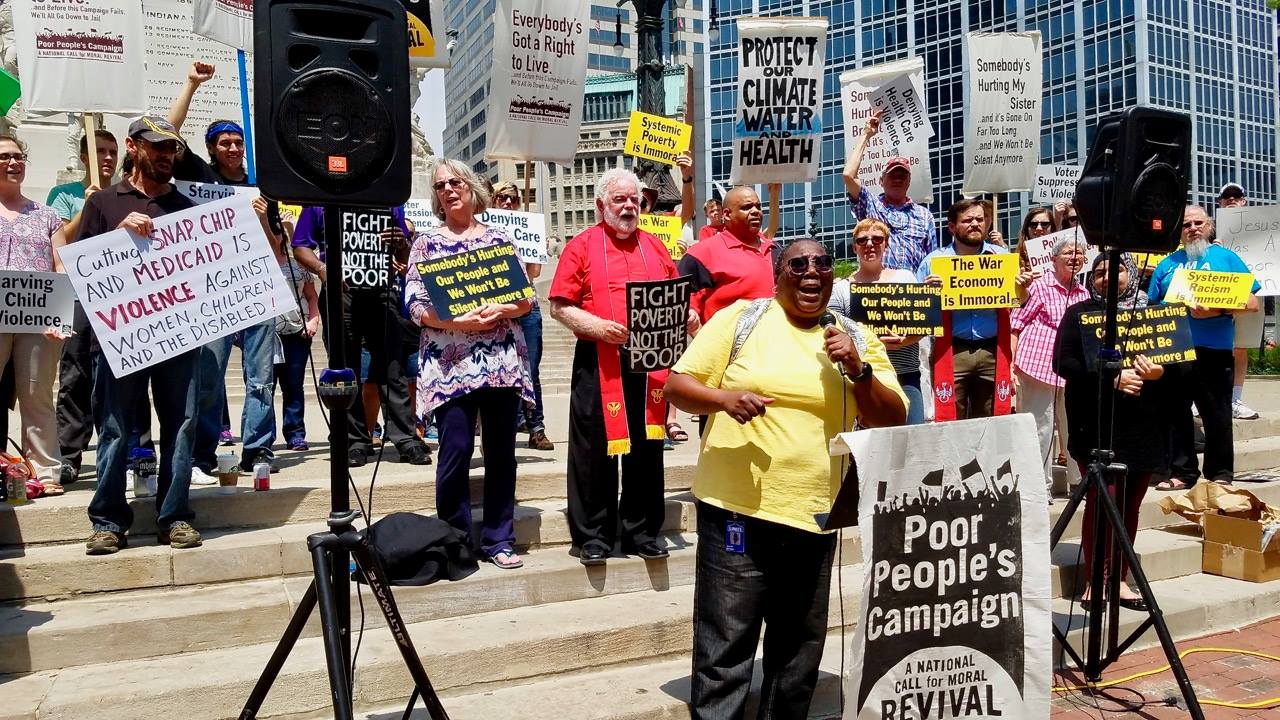 Photo: Bambi Alridge sings the song “Somebody’s hurting my people” at the Poor People’s Campaign demonstration May 14 in Indianapolis. Photo by Thomas Frank.

Police arrested more than a dozen people, including two recent Goshen (Indiana) College alums, on May 14 in Indianapolis who were participating in that city’s protest connected to the Poor People’s Campaign, a nationwide revival of the campaign planned by Martin Luther King Jr. a half century ago.

Although Brooks and Miller declined to comment on their charges, the Indianapolis Star reported police made the arrests after the individuals blocked a downtown intersection.

Dozens of participants gathered in downtown Indianapolis holding signs and singing, Miller said in a May 21 email. Several spoke into a microphone sharing personal stories and experiences related to the Poor People’s Campaign theme for the week: “Women, Children and the Disabled.”

“The mood was celebratory, loving, determined and powerful,” Miller said. “We stood together as affected individuals but also as a community. As in most moments of our lives, we were deeply aware of the injustice that that tries to keep us down, along with our brothers and sisters who, like us, are poor, who are people of color, who are disabled, who are women and children. So we weren’t always happy, but we didn’t take one step without love; we didn’t take one step that wasn’t unified.”

Miller said she read King’s “Letter from a Birmingham Jail” as part of her preparation for the demonstration and that it inspired her.

Brooks noted in a May 21 email that in the days leading up to the demonstration, she read about two black men who were murdered in Oklahoma.

“I felt like it is my job to call out these systems and advocate for poor people and people of color to say these systems are broken and we can’t tolerate them anymore,” Brooks said.

The Poor People’s Campaign website says it “is uniting tens of thousands of people across the country to challenge the evils of systemic racism, poverty, the war economy, ecological devastation and the nation’s distorted morality.”

Both Brooks and Miller said they hope Mennonites pay attention and get involved.

“Jesus talks constantly about the poor and dispossessed, about the marginalized and oppressed,” Miller said. “We are called to take part in more than a personal journey of faith. We are also called to step out into the streets and be part of a community of faith that is actively working to help the poor by taking down systems of oppression.”

Brooks said, “If you are white and a Mennonite and you’re trying to live out your faith in an active way, please find ways to advocate for people of color and poor people in our nation and world. Stepping out of your comfort zone and entering spaces with poor and disposed people and witnessing these oppressive systems firsthand can be a powerful act of solidarity as well as a learning experience.”

As part of the Poor People’s Campaign, demonstrations took place May 14 in more than 30 state capitals and in Washington, D.C. Organizers say these demonstrations kicked off 40 days of protests and nonviolent direct action across the country.

Co-organizer Rev. William Barber II told the Los Angeles Times that a national movement is necessary because of the many measures against poor people that have grown in recent years.