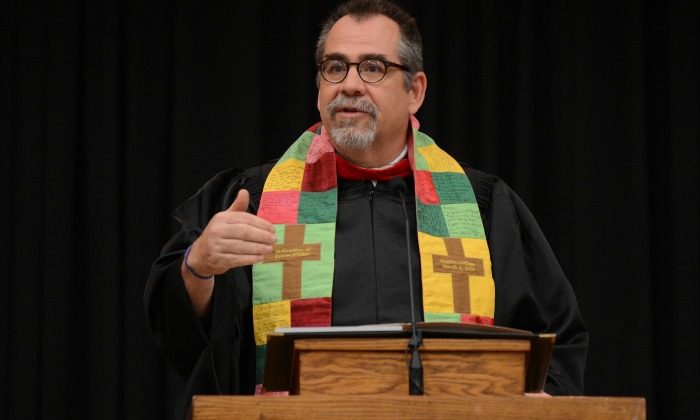 Hesston (Kansas) College graduates were encouraged to frame their lives with love for God, others and self. Based on Mark 12:28-34, which served as the college’s theme verse for the 2015-16 year, Hesston College psychology and Bible instructor Kevin Wilder delivered the commencement address “Ultimate Questions,” at the May 8 graduation exercises.

Wilder explained that ultimate questions are those “that get to the point and reveal a lot.” The Mark 12

passage does that by asking which of the commandments laid out in the passage–love God with your whole being, love your neighbor and respect yourself enough so you can show empathy–is the most important.

“Which is the most important?” Wilder asked. “It depends. Starting with one helps you understand the other two.”

Wilder admitted that “loving people is hard and confusing,” but encouraged graduates to be inspired by the passage and love the way they have been loved during their time as Hesston College students.

Wilder started at Hesston College in 1998 as campus pastor, serving in that role for 10 years before transitioning to a faculty position.

The 2016 graduation looked different from those of the past 45 years, as graduates donned the traditional caps and gowns for the first time since 1971.

President Howard Keim shared the history of the decision, noting that the class of 1972, under then student body president Howard Keim, voted by overwhelming majority to discontinue the practice. The class of 2016 voted by overwhelming majority to return to the traditional practice. Keim stated that in both instances, the administration reasoned that “graduation is a time to honor the graduates, so their request was granted.”

Student commencement speakers were Isaiah Crosby (Ponca City, Oklahoma) and Emily Kauffman (Pettisville, Ohio) who were nominated by faculty and staff and chosen by their classmates to deliver student addresses.

Individual student groups were recognized in special ceremonies May 7.

A recognition ceremony was held for eight students completing the Disaster Management Program.

Brett Troyer, a 2006 Hesston College graduate, and the first person to receive certification for completing the program, delivered a message entitled “Called to Serve.” Troyer is the Project Logistics Coordinator for Mennonite Disaster Service, based from the Bi-National Office in Lititz, Pennsylvania.

To view a video of the full commencement exercise and other livestream events from the weekend, visit hesston.edu/events/commencement.