Joshua Stoltzfus for The Mennonite 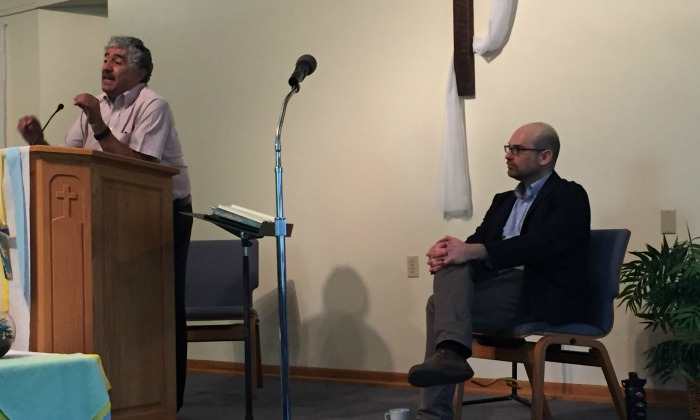 The Jewish and Palestinian Voices for Peace tour continued its second leg of through Mennonite communities this past Friday, May 12, making its way to Walnut Hill Mennonite Church, Goshen, Indiana, after presenting at Plymouth Congregational Church, Fort Wayne, Indiana, the night before.

Speakers for the event included Jonathan Kuttab, a Palestinian Mennonite who serves as a human rights lawyer in Israel-Palestine and the United States, and Benjamin Balthaser, a Jewish professor of English at Indiana University South Bend. Kuttab and Balthaser took turns describing their take on the history of the Israel-Palestine conflict, two-state solutions and how U.S. politics effect the region. They also took time to answer questions from the audience of about 35 attendees.

“As Mennonites and as peacemakers, what do we support and what do we oppose in this context?” said Kuttab at the beginning of the evening.

Two years ago, the Mennonite community proposed a resolution addressing the Middle East conflict at the Kansas City Convention. The resolution was tabled until the upcoming Orlando convention in July, so that there could be further study of the topic.

“Our being here right now is part of studying more,” said Kuttab.

Much of the presentation was informational, as one of the objectives of the tour was to provide information for Mennonite delegates who may hold sway in the resolution that will be presented in July.

“We cannot face a two-state solution[1] at this point. It only looks like one state with two groups of people,” Kuttab said. “[Palestinians] are under [Israeli] domain, subject to humiliation, restricted human rights and taken prisoner. This can only be called apartheid, similar to South Africa.”

Balthaser looked at the relationships of those within U.S. borders and the ways anti-Semitic attitudes have saturated American politics.

“Israel right now is a reflection of the far-right,” said Balthaser. “There are some people who only dream of replicating what has been achieved in Israel…an ethno-state where everyone lives in comfort.”

According to Balthaser, though there are still anti-Semitic attitudes among some right-wing politicians, there is an unlikely relationship between Jewish communities and these politicians. With the formation of an Israeli state, an attractive location for Jews provides incentive for the relocation of Jews out of the United States.

Balthaser gave the example of the recent meeting of Jewish Rabbi Shmuley Boteach and politician Steve Bannon, an aid to president Trump, both of whom seemed very pleased with their meeting.

“Politicians make strange bedfellows,” said Balthaser, aptly quoting the famous phrase. “[European Jews] are no longer arguing that they are the light of the world and need land but rather use the argument of Palestinian terrorists and fear.”