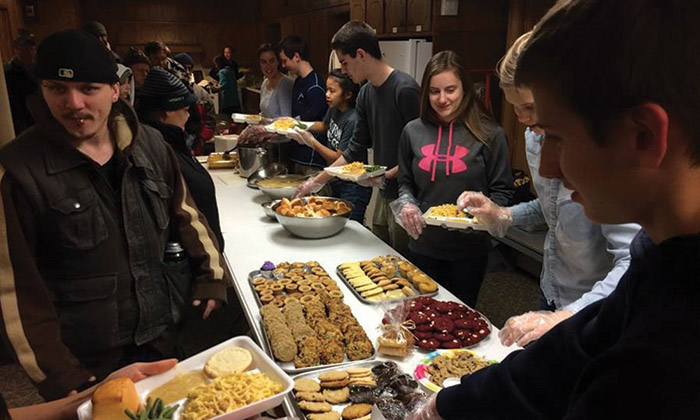 Walk east on Chestnut Street in Lancaster, Pa., and you will pass apartments, former factories, restored brick homes, cafes and bars. If it is Monday evening, you will come upon a crowd of people huddled at a door waiting to enter.

It is not a sale, political rally or government handout. They want to enter East Chestnut Street Mennonite Church (ECSMC) for the community meal.

The crowd is comprised of 170 people who have no job, underpaid jobs or good jobs. Some have homes, some do not. All, however, are hungry for food and fellowship.

“A bunch of my friends got me to come here, and I have been coming for years,” says Bob as he waits in the lobby.

Bill confesses, “I come here for good nutrition and to talk to Annabelle. She encourages me.”

Bryana and Britney, two teens, come with their grandmother. They like the home-cooked food.

Socializing is as important as the food.

Indeed, the church fellowship hall buzzes with conversation as folks go through the food line. Becky Thomas helps the children and the frail juggle their trays and drinks. Friends greet each other over plates of steaming chickenetti, peas, applesauce and cookies. Lois Hess, the coordinator, says, “It is a happy time—we look forward to seeing each other.”

The idea of serving meals began in the winter of 2001, when the Lancaster County Council of Churches called on churches to fill a need.

Lancaster city, with a population of 60,000, had overflowing shelters then. (Currently the county has 500 homeless.) The goal was for churches to offer home-cooked, nutritious meals to their neighbors in an atmosphere of respect and peace. Along with other congregations, ECSMC, led by Pastor Ron Adams and the mission commission, stepped up to the plate.

The meals are the work of many hands.

Each Sunday school class is responsible for one or two meals per year. Even the youth take a turn. On any Monday, 40 volunteers plan the menu, shop, prepare food, set tables, serve, pour coffee, mingle and clean up.

This whole effort is an ecumenical endeavor.

Most evenings, Pastor Todd Friesen listens to people, prays with them and makes referrals to social agencies. He says this ministry allows him to meet Jesus.

In the end, most say these Monday suppers have changed ECSMC.

First, says Pastor Todd, we are united in a mission of hospitality on which we work together.

Second, we have learned to know our neighbors. We are more aware of the throes of city life.

Third, we have learned to listen and have relinquished some of our pat answers about urban living.

He says, “These meals keep the gospel before us in a challenging way. We cannot hide.”

Summing up after 10 years of attending Monday night suppers, Jim claims, “It is helpful—life sustaining, really.” People on both sides of the serving table seem to agree with him.