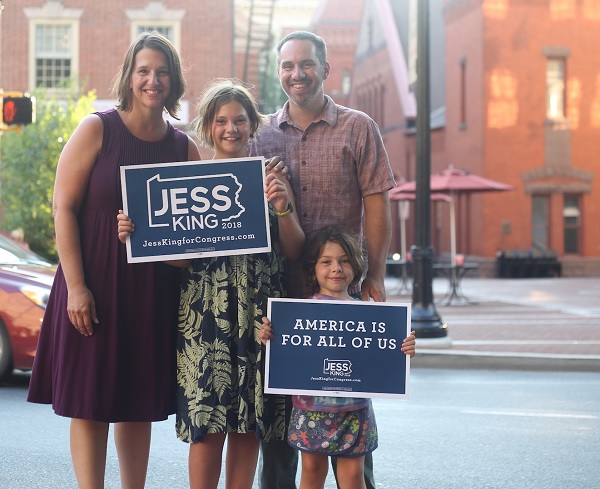 For six years, Jess King of Lancaster, Pennsylvania, believed in and fought for a mission: using business as a tool to reduce poverty and help build sustainable communities.

But when Lancaster Mayor Rick Gray formed a commission in 2016 to address the city’s poverty rate, which stood at around 30 percent, higher than Philadelphia or Pittsburgh, King realized the poverty rate in her city had increased by about half from 2000 to 2016. King had been executive director of the nonprofit ASSETS since 2010.

“The realization that the poverty rate had actually gone up, even though I was so ingrained in addressing inequality and opportunity, was a sucker punch to my gut,” said King, 43, a member of Community Mennonite Church in Lancaster, in a Feb. 27 interview. “It really caused me to question and reflect on the systemic issues going on in our community. It felt like our work at ASSETS was a Band-Aid on a broken system.”

While King still supports the mission of ASSETS, an organization that grew out of Mennonite Economic Development Associates (MEDA), she took a leave of absence last year to run for the U.S. House of Representatives in the state’s 16th congressional district.

King, a Democrat, obtained the unanimous endorsement of the Lancaster County Democratic Committee on Feb. 27, when her main challenger, Christina Hartman, withdrew from the primary race. The incumbent in District 16 is Rep. Lloyd K. Smucker, a Republican.

“I’m sick and tired of working my heart out, and seeing other people do that, and not get ahead,” King said. “If we want to truly see things get better for all of us, we need to fight for people to get out of poverty at a systemic level.”

While King and Rep. Smucker’s political views vary greatly, they both have Anabaptist roots.

Smucker, born in Lancaster, was born into an Amish family and graduated from Lancaster Mennonite High School in 1981.

King, born in nearby Leola, Pennsylvania, graduated from Lancaster Mennonite High School in 1992 and Eastern Mennonite University, Harrisonburg, Virginia, in 1996.

From 1997 to 1998, King was assistant editor of Gospel Herald, one of the two publications that merged to form The Mennonite. She was executive director of PULSE, a young adult service program in Pittsburgh founded by Mennonites in Pittsburgh.

Rep. Smucker’s office declined to comment for this story.

King said her understanding of Jesus’ call to “love your neighbor as yourself” motivates her political platform.

“Caring for ‘the least of these,’ people who are hungry, naked, sick, in prison, is what I think Jesus meant when he talked about caring for the poor and the upside-down kingdom,” King said. “To me, the lens of looking at the world through loving our neighbors is the first responsibility we have as followers of Jesus.”

She acknowledges that seeking a position in Congress makes some Mennonites uncomfortable, given their understanding of how to be faithful followers of Jesus. Some believe allegiance to Jesus as Lord and the pursuit of nonviolence mean serving in the federal government is not possible for faithful Christians. King doesn’t think there needs to be such a “brick wall” between Mennonites and government.

“Our constitution is of, by and for the people,” she said. “A democracy isn’t a monarchy; it’s made up of people. When you get to know city council members and mayors, you recognize these are people you have a lot in common with, and some of the resources you have to work with are public resources funded by our tax dollars.”

ASSETS has received grants from the U.S. Small Business Administration.

“Mennonites have so much to bring to a national and international forefront around policy because of our strongly held beliefs,” she said. “What if we could actually be the ones impacting policy? Perhaps that’s a bit of a departure, in some ways, from traditional Mennonite belief, but it seems to me to be a natural outgrowth of our service toward the common good.”

Although King is running as a Democrat, she said, she “doesn’t fit neatly into one party” and believes that the country’s “two-party system is ineffective.”

“When I talk to voters, I hear a lot of people say they don’t identify with either party or that they don’t agree with the party they thought they identified with, and I hear them say, ‘I resonate with your values. Your values are my values,’” King said. ““I believe part of my job is to be who I am and fight for what I believe in within a party and continue to inform and change it from within.”

Disagreements between Republicans and Democrats in Pennsylvania gained national attention in recent weeks as the Supreme Court of Pennsylvania redrew congressional district maps that the court ruled had been gerrymandered in violation of the state’s constitution. The court released new maps on Feb. 26 that will be implemented in time for the 2018 election.

The current District 16 – where King and Smucker are located – will become District 11. Analysis from The New York Times showed Republicans gaining an edge there, while across the state Democrats “couldn’t have asked for much more from the new map.”

“The maps were a mess and not fair,” King said. “Overall, though, the recent redistricting was still a partisan process that’s flawed.”

Pennsylvania’s 16th congressional district has had a Republican in office for all but two years since 1921.

“The redistricting hasn’t changed my campaign’s platform, motivation or methodology,” King said. “We have an unprecedented ground game.”

King knows about overcoming adversity. When she was 2, her father died suddenly in a plane crash. He was 32.

“I have no memory of my father,” King said. “My mom was widowed. Our extended family’s faith was part of making it through that loss. It made me realize life is short and you have to make it count, and that was very clear to me at an early age.”

King said she has often been inclined toward “risk-taking on behalf of the common good.” It’s what led her to help buy an abandoned church in Pittsburgh that she and others turned into an arts and social enterprise incubator, and it’s what led her to ASSETS, which in her tenure grew from serving 150 business leaders a year to 1,500, supporting entrepreneurs in creating or retaining more than 350 jobs last year.

“This campaign isn’t about power for power’s sake, or notoriety, or climbing a political ladder, or a predetermined political career,” she said. “It’s about how we use the leverage of elected office to improve people’s lives.”