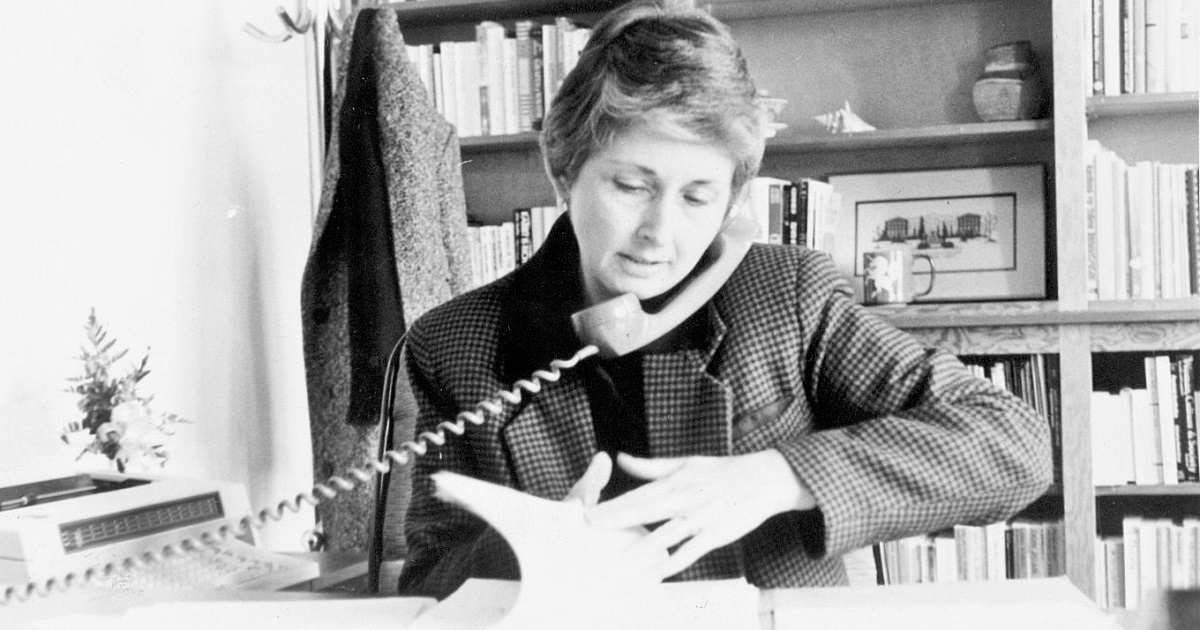 This article comes from the October issue of The Mennonite, which focuses on “Positive uses of power.” Read more reflections here or subscribe here to receive more original features in your inbox each month.

On the campus of Bluffton (Ohio) University, next to the Sauder Visual Arts Center, is a bench positioned on a rise overlooking the flood plain alongside Riley Creek. Carved into the bench are the words “…it’s all about relationships”—a tribute to a beloved longtime dean of students who died too soon of multiple myeloma. Don Scheweingruber became my mentor, modeling for this novice college president what leadership and power are about.

The opportunity to go to college, having grown up in a faith community where higher education was suspect, led me to unexpected calls into leadership. I understood the Anabaptist value of service, but any embrace of power dynamics (especially for women, who were to be behind-the-scenes and private figures) was beyond any personal future I might have imagined. My understanding of power has come more through practical experience and story than through theory, leading full circle to my friend Don’s life rule, “It’s all about relationships.”

Much about power, positive and negative, is elusive, not easily nailed down. There is no neat formula for how one should exercise power. As an academic dean, I wondered how a literature degree applied to administration. I was more persuaded by the servant leadership model of Robert Greenleaf than by any sense that the role I was accepting had anything to do with power.

An encounter one day with a faculty member schooled in organizational and social theory jolted me into a new understanding. I only remember that an exasperated professor said to me, his new dean, something like, “You do not acknowledge that you are exercising power.”

He was right. Power was a bad word, nowhere listed in the job description. I was having a hard enough time seeing myself as Eastern Mennonite University’s first woman academic dean, a public role where women had not been welcome.

Thankfully, as I accepted increasing responsibilities, the exercise of power long associated with the old “command and control” mode of leadership was giving way to concepts that valued collaboration and understood organizations as living systems rather than simply hierarchical structures.1 I discovered how paying attention to small things can shape an organization’s culture and cultivate relationships. I developed a pattern of writing notes to colleagues, commending individual achievements. I was surprised by how moved people were by these gestures of appreciation, by the fact that someone had noticed. Caring, honoring one another, celebrating—these are not usually qualities that come to mind when one describes the exercise of power, but I suspect they matter more in the life of organizations than we know.

Valuing relationships does not make the job easier, however. Leaders must be clear-eyed about human frailty. They must accept responsibility for making difficult decisions. As a college dean or president, one always faces budget and program challenges. But the most difficult decisions are about personnel, knowing it is not a small thing to hold power that affects individual lives.

Recognizing the paradoxical nature of power can be instructive. Leadership is not so much about power over as it is about empowering others. Leadership requires a willing acceptance of risk, even an acceptance of the grace of ignorance. Leaders cannot know enough, and that is good. My teachers continue to be prophets and poets, past and present. There is fiction writer Flannery O’Connor’s advice: “Be properly scared and go on doing what you have to do.”2 I often return to the Old Testament account of Joshua and the Israelites on the brink of crossing into hostile territory. There at the Jordan River, the word comes: “Move out….Then you will know which way to go, since you have never been this way before” (Joshua 3:3-4 TNIV).

Living with power as paradox, in its ever-present varieties, saves us from easy answers and smug conclusions. Here is a sampling from my evolving understanding of leadership and power:

The power of possibility requires telling the story. One of a leader’s greatest responsibilities is to keep hope alive.3 Power exercised in this sense requires an ability to live with uncertainty and rise above the inevitable ebb and flow of turmoil that characterizes all human enterprise. Through telling the organization’s story and being attuned to current realities leaders can shape a hopeful future.

The power to discern is not lodged in an attitude of either/or as much as in a more complicated both/and. Early in my leadership I was in awe of those who seemed to have clear answers. How did they know? With experience, I gained a deeper appreciation for the complexities of decision-making that often required strategies of both/and rather than simply either/or.

Power exercised with integrity means being willing to let go. Being able to let go is one of the most difficult yet essential qualities of a leader. There is virtue in accepting that not all problems need to be solved; not everything can be fixed. There is a proper humility in leaving some things up to God.

The power of showing up reminds us that a leader’s role is not all center stage. Much of the work is paying attention, listening, supporting and honoring others by being present.

The power of the mundane, attending to the ordinary, is not to be overlooked. In those moments of everyday encounters, if we are paying attention, we gain glimpses of the sacredness of our calling, and we become aware how much we love the work.

The power of gratitude is transformative. How leaders express gratitude to God and to others and how they experience gratitude in the day-to-day can be an incalculable force for good in the health of an organization.

There is much that is messy and much that is mysterious about power. Entering spheres of institutional leadership requires a certain ability not to take oneself too seriously. Saying yes to meaningful and worthy work is a journey of humility and grace. As contemporary poet-prophet Wendell Berry says, “Seeing the work that is to be done, who can help wanting…to do it?”4

Lee Snyder served as president of Bluffton (Ohio) University from 1996 to 2006. She is a member of Community Mennonite Church in Harrisonburg, Virginia.