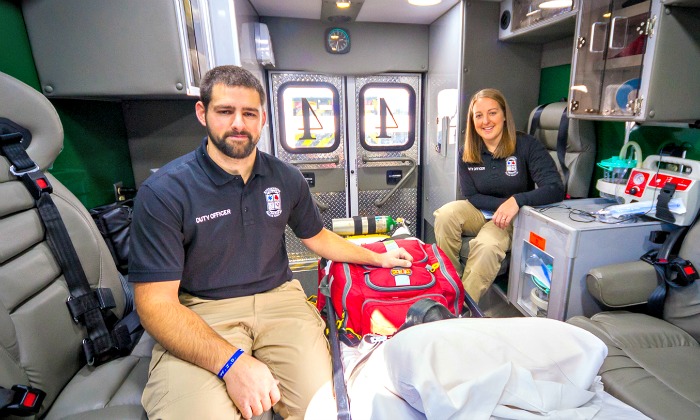 EMU alumni Katie (Lehman) and Jackson Maust are seasoned members among the 160 volunteers with the Harrisonburg Rescue Squad. From its headquarters on Reservoir Street, R40 responds to approximately 8,000 calls per year. (Photos by Michael Sheeler)

On any given Saturday night, when most married couples are relaxing in front of their TVs or maybe eating out, this couple is more likely to be found at an accident scene or a strange home—“seeing things no one else will see.”

Jackson and Katrina (Lehman) Maust have been rescue squad members since they were Eastern Mennonite University, Harrisonburg, Va., undergraduates six years ago.

The pagers connecting them to Harrisonburg-Rockingham County emergency dispatch are never far from their side—especially on Friday nights, and even more so when that Friday night happens to be both Halloween and the beginning of Homecoming Weekend at James Madison University.

Such a cosmic coincidence often makes pagers crackle with incoming calls and the all-volunteer crew at the Harrisonburg Rescue Squad (HRS) busy in response.

In times like that, the Mausts—Jackson is a physical therapist and Katie an emergency room nurse – come to lend their capable hands.

“Sometimes I think about what normal people do on a Saturday night,” Katie said. “We sometimes end up helping the rescue squad. In situations like that, I think it’s easier that the two of us share that common commitment and that common interest.”

Helping people in need, and walking with them through those times, is a calling to the Mausts, and in their work, they are sustained by their faith, their family and friends, their colleagues, and each other.

“Both of my jobs are high stress, intense places to work where sometimes horrible, awful things happen,” says Katie. “You see very raw human emotion and the human experience right there in front of you. It’s a gift to experience those things, but it’s also a challenge, too. It’s a way that we serve God, being with people and walking through.”

Growing at EMU and in the community
Both Jackson and Katie became involved at the rescue squad while undergraduates at EMU (the two had met as freshmen, but started dating as seniors). Jackson, a biology major from Michigan, was interested in physical therapy. Katie, from Ohio, was also a biology major interested in healthcare.

Their majors and pre-professional interests required clinical exposure and contact hours, but both Jackson and Katie fulfilled that requirement before volunteering with the squad. They joined together to gain more experience, but not with an equal sense of certainty, Jackson recalled.

“I didn’t think of myself as someone who would have any interest in high stress, emergency situations,” he said.

While he may not have had any interest, he certainly had plenty of experience in high stress situations: as a three-year starting goalkeeper on the Royals soccer team, Maust had more than 225 career saves to his name. Blocking a goal, though, is a minor and simplistic act compared to saving a life. Yet Jackson eventually found a calling, thanks to the rigorous training and the strong support network provided by HRS.

“This agency does a great job of preparing you and training you,” Jackson said, adding that the squad’s trainers teach not only medical skills, but provide emotional support as well. “It’s not a natural thing to be able to do some of the things we do and see some of the things we see and then move on. Coping is something you learn. It’s not something you naturally know how to do.”

After graduation, he and Katie stayed in Harrisonburg for a year. That time solidified their commitment – both to volunteering in medical services and to each other.

The couple married in 2011 in Columbus, Ohio, where Jackson was working on a doctorate in physical therapy at The Ohio State University, and Katie, who was accepted to medical school but decided not to pursue the profession, was completing a second bachelor’s degree in an accelerated nursing program at Capital University. They also volunteered with a small one-ambulance squad in Columbus. (For comparison, Harrisonburg has nine.)

Coming back to Harrisonburg
Fast-forward to Harrisonburg in 2014, and a similar life, carrying pagers and running calls for the rescue squad, but to this new era, add full-time careers, a warm and wide circle of friends, and a growing sense of rootedness to Harrisonburg.

Now Katie, 28, and Jackson, 27, are seasoned members among the 160 volunteers. From its headquarters on Reservoir Street, R40 responds to approximately 8,000 calls per year.

The couple has taken on mentoring, training and supervisorial responsibilities. Katie was recently voted to a one-year term on the board of directors and also sits on the training committee.

Jackson serves as one of three fleet maintenance officers and also one of four deputy chiefs (each chief is in charge of the squad’s operations on a rotating four-week schedule). He is one of a small group of volunteers certified to drive the squad truck and operate its heavy equipment at accident scenes requiring extrication equipment.

These responsibilities are in addition to the minimal 48 hours a month of shift work required of all members. Shifts vary from six hours on the weekdays to 12 hours on the weekends. When Katie and Jackson work a shift, they usually fill the role of duty officer, or shift supervisor – assessing calls and determining which crews will be sent.

“There’s a lot of people who pour themselves into this place,” Katie said, “far beyond the minimal requirements.”

“Once you get involved with the agency and care about it, you get involved,” Jackson added. “That’s one way we stay volunteer. All the members put in their hours and a lot more.”

Spending so many hours at the rescue squad, and working together in traumatic situations, builds strong bonds, Katie said. “You go through a lot together, and you have fun, too. That’s a huge part of what brings us back.”

As college students, Katie and Jackson appreciated that volunteering with the rescue squad got them out of the Park View community and into greater Harrisonburg. Learning the city’s street names and meeting people who lived and worked on those streets connected them more deeply with their adopted home.

But with rootedness comes a different perception, Jackson says. “This work does not discriminate. We end up in every type of house and business and out in the street. You appreciate different parts of the city. When we moved back indefinitely with no plans to leave, it feels a lot different …this place is a lot more mine than it used to be.”

When driving through Harrisonburg, Katie says the city and its residents evoke “intimate” memories. “I think, ‘I’ve been there and I’ve been there. I’ve been in that office and in that school.’ I’ve been in people’s homes. It feels like a privilege to be the person someone calls when they need help and they open the door and say come in. You see things no one else will see.”

The couple admits to sometimes feeling exhausted by their busy schedules and stressful jobs.

That’s when they head outside for some biking, running, or gardening. Jackson plays upright bass with The Walking Roots Band, a close-knit group (some of whom are fellow EMU grads). Their faith community at Zion Mennonite Church also sustains them.

Katie says that each shift always brings affirmation for both her and for their commitment as a couple to this special kind of service. “Seeing it as a calling and an opportunity to serve gives this a different meaning than something we’re signed up to do and we should keep doing because we’ve been doing it a long time.”

“Is this where we still feel like God’s calling us to be?” she asks.

The answer is yes.