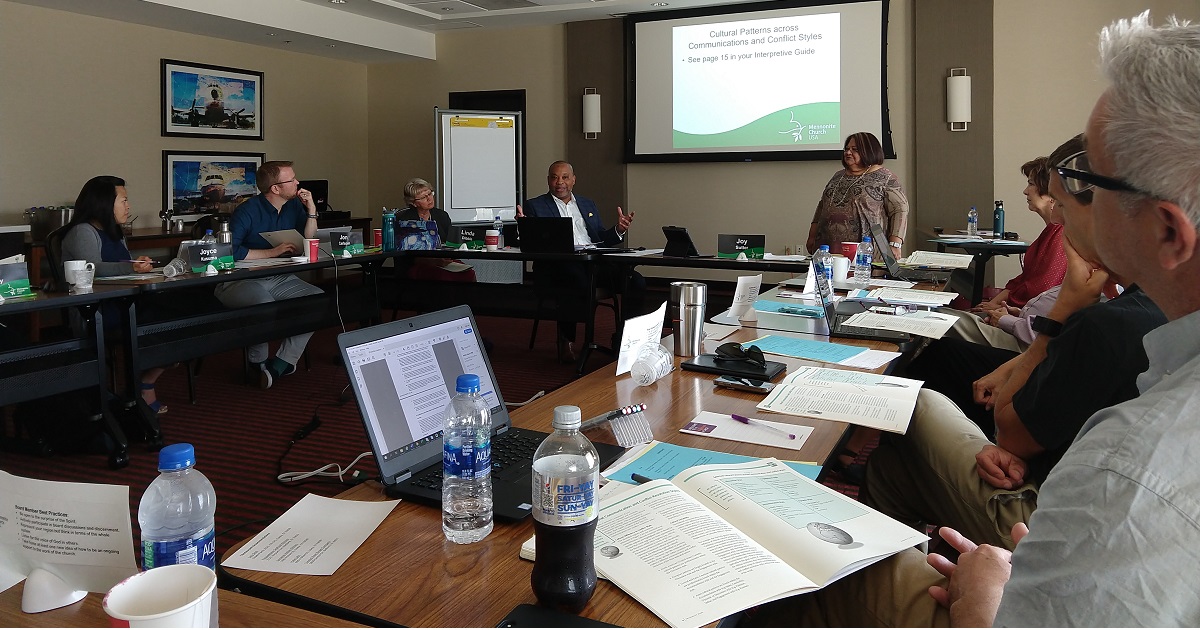 The Mennonite Church USA Executive Board (EB) met to look at items for discernment and action over the next two years, including financial management and the Membership Guidelines.

In his executive director’s report, Glen Guyton stressed the need to “address the financial challenges that lie ahead” during the next biennium, including doing more fundraising. Giving from MC USA agencies to the EB has declined in recent years, Guyton said, and giving from area conferences has fallen steadily from $759,267 in 2005 to $394,020 in 2018, a drop of about 48%.

EB members engaged in lengthy conversation on the question, What are the benefits of being part of MC USA? Guyton shared his thoughts on MC USA’s benefits of diversity, community, resources, equipping, accountability and collaborative learning.

“We need to discuss what our value proposition is as a denomination to our constituency, including potential donors and area conferences,” said EB member Jim Caskey of Goshen, Indiana.

EB staff shared that feedback received regarding MennoCon19 has been mostly positive. “How will we as leaders and board members respond to the positive upswing, and the movement of the Spirit, at MennoCon19?” asked Guyton.

“We need to keep our journey forward going and build on MennoCon19 over the next two years and beyond,” said Sutter.

Due to lower than expected attendance, especially for youth, MennoCon19 resulted in an approximate net loss of $112,000. While conventions are budgeted to break even, the eight conventions from 2005 to 2019, overall, have resulted in a net loss.

MennoCon21 will be held July 6-10 in Cincinnati, Ohio.

The EB provided feedback on a staff proposal to hold a two-day advisory group meeting later this year to generate options for how MC USA might discern the future of the Membership Guidelines. The EB’s discussion of the proposal was confidential, though the board did not enter executive session.

Michael Danner, MC USA associate executive director for church vitality and engagement, said that the proposal replaces a process previously proposed to the EB for how to discern the guidelines. The previous proposal was intended to be presented at MennoCon19 but was tabled due to constituent response to it.

Lee Smucker, chair of the MMN executive director search committee, said it has distributed a questionnaire to gain constituent feedback and has drafted a job description. The committee’s next in-person meeting is Sept. 14-15.

The EB took action to endorse the August 2019 “call to prayer and action” from MEA.

The EB also took action on its consent agenda to appoint Stan Shantz as chairperson for the MC USA Leadership Discernment Committee, effective immediately, and to appoint Sylvia Penner to serve on the boards of Everence Association, Inc., and MMA Stewardship Agency, beginning Jan. 21, 2020.

The EB participated in an intercultural conflict resolution training.

Prior to the EB meeting, the EB’s executive committee on Aug. 12 approved Guyton’s proposal for a nine-week sabbatical from January to March 2020. Guyton plans to participate in Spanish immersion in another country and complete a book to be published by Herald Press.