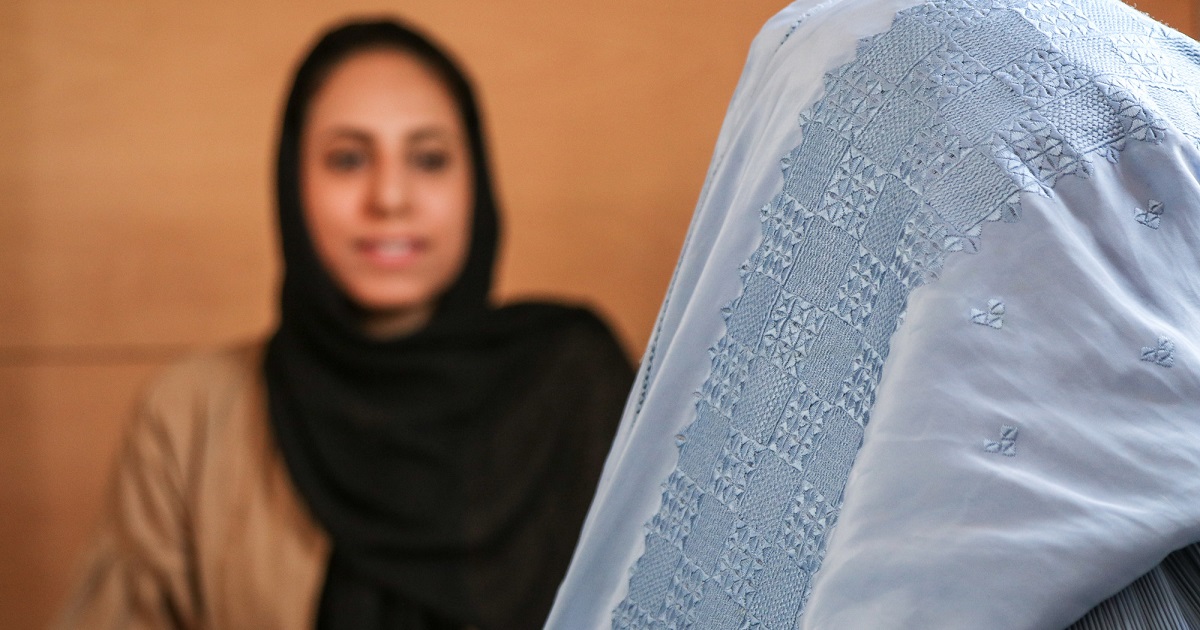 On the grounds of the government health center in Herat, Afghanistan, a crowd of women in flowing black and blue fabric wait on the steps of the women’s health clinic. Off to the side, a small group of women are waiting to see Fatima Ghulami, a trained mental health counselor.

Ghulami’s office is half of a repurposed shipping container, baking in the Afghan sun. It’s an inauspicious space, but it’s also a space where women find hope in their war-tired country. Her work is a service provided by Women’s Activities and Social Services Association (WASSA), an partner organization of Mennonite Central Committee (MCC).

Kadija, whose name is changed for security, is a young woman of 22 with two small children. She has experienced years of war and insecurity, which has affected her mental health.

“For years I suffered,” she says. “Before coming here, I would lock myself in a dark room. I cried all the time. I was scared to see people, to have guests at our house. I could not talk with my family. I was not allowed to leave the home. I was a shame to my family. I tried to kill myself.”

Like many women in this part of Afghanistan, Kadija had been exposed to horrible scenes of violence, had been confined to her home by strict gender norms and did not have access to even basic mental health care or counseling. Without a path to recovery, Kadija had lost hope until the day she met Ghulami.

Many women in Afghanistan are in similarly difficult situations with little access to mental health services. The country has high rates of mental illness driven by decades of war and displacement, chronic poverty and few government services. The World Health Organization estimates 75% of women in Afghanistan have a diagnosable mental health condition, compared to a global average of around 25%.

Afghanistan also has high rates of domestic and gender-based violence. According to a recent United States Institute of Peace study, 87% of women in Afghanistan have experienced these types of violence, which contribute to the high levels of mental health issues.

A year ago, Ghulami came to Kadija’s village to explain to the elders and village leaders why mental health treatment is important and what support was available for women who were suffering. Kadija’s uncle heard Ghulami speak and recommended Kadija see her. She received the necessary approval from her family and husband because they trusted Ghulami and WASSA.

For the last five months, Kadija has been attending almost daily activities, including individual therapy with Ghulami, group sessions with women in similar situations and vocational training that gets her out of the house and engaged with other women in productive work.

“Despite experiencing so many bad things in my life, this program helped me to move past things, and despite a sorrowful life, I have learned to live again,” Kadija says. “Since coming here I have learned how to overcome my problems… Now I have learned to deal with my problems, to say yes to life, to learn how to love, how to be happy, how to welcome guests and family back to my life.”

Kadija is one of 150 women in similar situations receiving mental health counseling and vocational training in this three-year project. At the project’s tailoring center, women like Kadija work in a group setting to learn sewing and tailoring skills that can be used to generate income.

Various traumatic experiences have brought these women together. One woman lost two children to disease, causing her to fall into a deep depression. Another describes her husband’s addiction and the abuse and fear she has lived under for so long. Several describe suicide attempts.

An older woman whose brother was recently killed in a roadside bomb says, “I was trapped with those memories and that trauma. Being here is what saved me. Now I can laugh again. I am much happier.”

This region of Afghanistan has seen a rising number of women dying by suicide. According to the Afghan Independent Human Rights Commission (AIHRC), 80% of all suicide attempts in the country are by women, an inversion of the gender dynamic globally. Herat Province, the location of this MCC project, accounts for about half of all suicides in Afghanistan, despite having only about 7% of the population.

While political peace is a distant hope in this country, the mental health work undertaken by Ghulami and others is bringing healing and happiness in ways that many did not think was possible.

“These women had been forgotten,” Ghulami says. “They have had very hard lives here, but we can help them live better again. We need people to know there is hope.”