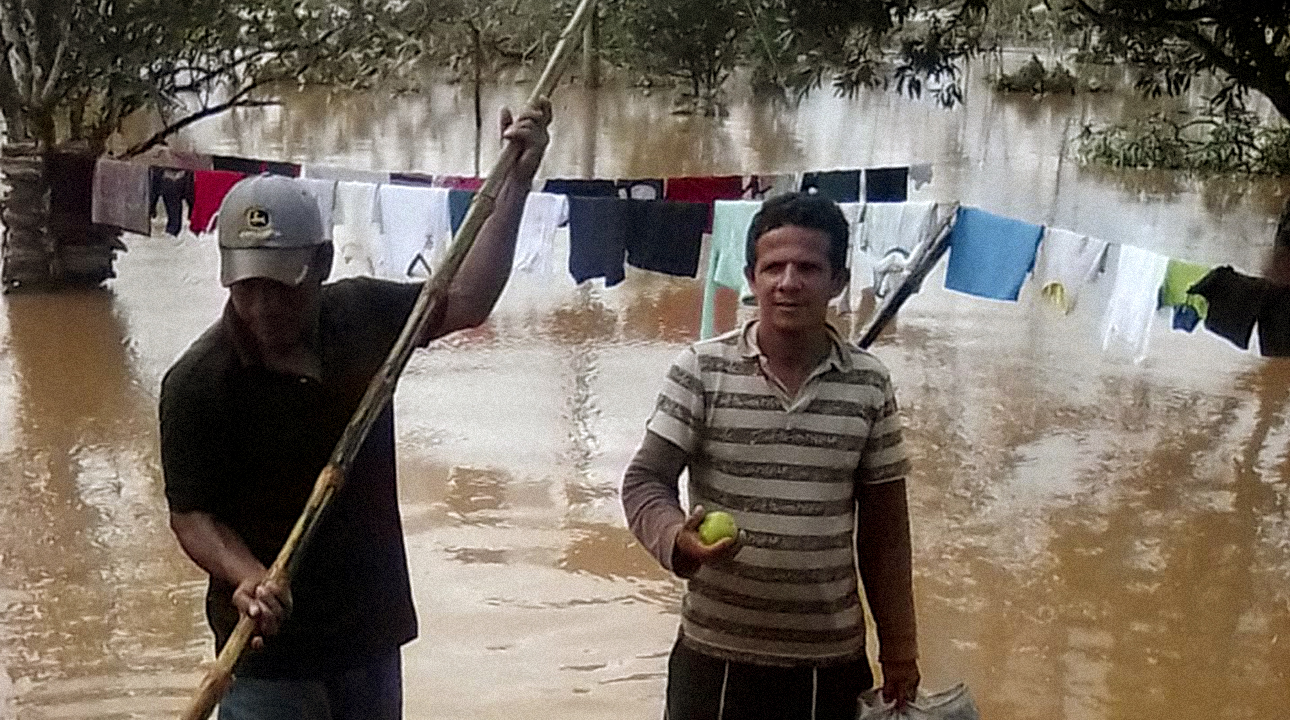 Ramón García, right, pastor of the Brethren in Christ church in Wasakín, Nicaragua, and Roger Stiven, an indigenous Mayagna community member, set off to assess the flood damage from Hurricane Iota in the northern region of Rosita. García is carrying a bag of oranges to distribute. For those in this disaster situation, it was not always possible or prioritized to follow COVID-19 precautions. — Ramón García

Hurricane Eta made landfall in Nicaragua on Nov. 3. Hurricane Iota, the strongest storm of the 2020 Atlantic hurricane season, followed on Nov. 16. The storms progressed on similar paths across Honduras into Guatemala, El Salvador and southern Mexico.

More than 100,000 people were evacuated, sometimes twice, from houses in Nicaragua and Honduras to shelters set up in schools and churches or to family members who live on higher ground. Farmers lost entire crops that were almost ready for harvest.

César Flores and Lizette Miranda, MCC area directors for Latin America and Haiti, live in San Pedro Sula, Honduras, where floodwaters covered rooftops in lower-lying parts of the city after both storms.

“As Anabaptists, we say service is our practice. Now is the time to serve,” said Flores. “This is the moment to serve with the Central American people, just loving those who are in need in the name of Jesus Christ.”

MCC is partnering with IEMH and Comisión Social Menonita (Mennonite Social Action Commission) by providing emergency food assistance and cleaning and hygiene supplies to people as they return home and COVID-19 masks for people at shelters.

In remote areas of Guatemala where houses and communities were flooded, the Q’eqchi’ (Kekchi) Mennonite Church conference provided shelter and distributed blankets, relief kits and hygiene kits that MCC provided to people living in the Alta Verapaz area.

Miranda said she sees a “loaves and fishes” effect, referring to Jesus feeding a multitude. In San Pedro Sula, people whose homes are not flooded are donating supplies or volunteering at the shelters. Churches in other parts of Honduras brought supplies by truck after Hurricane Eta.

Volunteer Judith Lemus, evacuated from her home by Hurricane Eta, became an integral part of the team that coordinated services at the shelter. She returned to her house and cleaned out the mud, only to be forced back by Hurricane Iota to the shelter, where she continues to volunteer.

In rural areas of Honduras and Nicaragua, which also experienced significant damage, MCC is looking at ways to share food resources with farmers who have lost the first productive crops they have had in years.

“We had many years of drought,” Miranda said. “This year we had consistent rain, and it was beautiful. People were expecting to have a good crop, but everything has been lost.”

Climate change is a root cause of the intensified weather patterns that Central America is experiencing, said MCC disaster response director Bruce Guenther. The Inter-Governmental Panel on Climate Change has indicated Central America will experience more frequent and severe drought and flooding because of climate change.

“This has been one of the most active hurricane seasons on record, with Iota being the strongest hurricane this late in the season,” Guenther said. “As in other regions of the world, we are seeing the impacts of climate change play out, impacting millions of vulnerable people.”

Regardless of the cause, the needs are great, and Flores said this goes beyond just practical needs to spiritual and emotional ones too. He believes pastors and other leaders, who have been working nonstop and carrying the problems of many people, will benefit from trauma healing that MCC plans to provide.