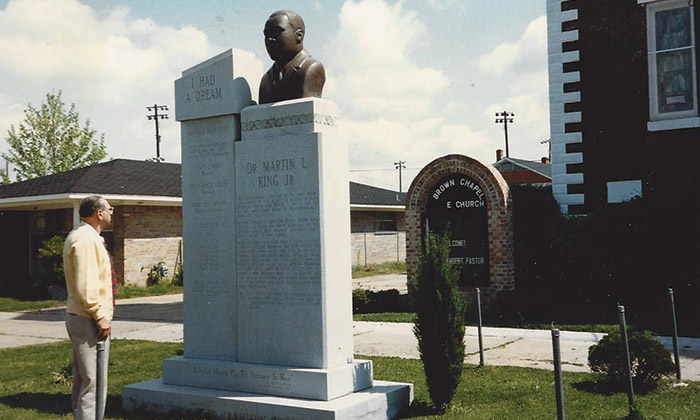 Fifty years ago this month, civil rights protesters marched from Selma to Montgomery, Ala. There were several marches, and these led to the passage of the Voting Rights Act later that year.

At least two Mennonites took part in one of these marches—Vic Stoltzfus and J. Lawrence Burkholder—and both men served as president of Goshen (Ind.) College.

As shown in the film Selma, the first march, on March 7, 1965, was called “Bloody Sunday” after its 600 marchers were attacked at the Edmund Pettus Bridge after leaving Selma. State troopers and county posse attacked the unarmed marchers with billy clubs and tear gas.

Stoltzfus writes that he was 31 and a part-time Menno­nite pastor and a full-time instructor at Youngstown University in Ohio.

What triggered his desire to go to Selma was seeing a telecast of Bloody Sunday on a black-and-white television in a motel room while he was traveling. He had no television at home, he says.

To make the trip he had to borrow money from the bank for his plane ticket. He also bought a life-insurance policy.

At that time, he writes, Selma was a small rural town where 90 percent of its African-American citizens were not allowed to vote. Bloody Sunday brought it to the nation’s attention.

“When beatings are used against nonviolent defenseless people,” Stoltzfus writes, “we have our own homegrown terrorism. The tactic of terrorism is to dispirit and cow people into submission.”

Stoltzfus had heard Martin Luther King Jr. speak at Goshen College, and he “admired his passion and courage for nonviolent social change,” he writes.

Witnessing Sheriff Jim Clark’s harsh tactics on March 7 led Stoltzfus to want to be a part of protesting such injustice. “I was interested in voting rights,” he writes, “but also as a person with convictions on nonviolence, I wanted King to succeed.”

Stoltzfus flew down on March 19, and a movement car took him to Selma that night.

“We slept in the brick row houses of the large black community,” he writes. “It was wall to wall people in beds and on the floor. [Our] hostess had lost her dishwashing job in a country club because she was seen with movement people. She asked us all for a donation for using her home.”

The next morning they attended workshops on nonviolence. “If we could not be nonviolent even in the face of beatings, we were invited to go home,” he writes.

Physicians for Social Responsibility made splints out of rolled-up newspaper to respond to broken bones.

Participants were urged to take the dome light bulb out of their cars so that the driver would not be visible for a sniper.

Many groups came, Stoltzfus writes, including Protestant ministers and seminarians from San Francisco, Catholic priests and nuns, and Abraham Joshua Heschel, a prominent Jewish theologian. People came from all 50 states, including Hawaii, he says.

Participants were instructed to insist on being arrested together with locked arms, black and white.

Stoltzfus became aware of the possible dangers of joining the march. One local church member told him, “If I were you, I’d stay just where you are.”

On March 20, the day before the march, U.S. Attorney General Bobby Kennedy federalized the Alabama National Guard to protect the marchers. As shown in the film Selma, King had sought court protection for the march from a federal judge, and that was granted.

That evening, marchers met at Brown Chapel, an African Methodist Episcopal church. “The church was packed, and people were sitting in the window sills,” Stoltzfus writes. Multiple offerings were taken to support the movement.

They heard several speakers, including Andrew Young, who later became mayor of Atlanta and the United Nations representative from the United States. They sang many freedom songs and heard from Peter, Paul and Mary and other musicians.

“I’m sorry the film did not catch the way these songs kept up the spirits of suffering people, some of whom had bandages on their heads that evening,” Stoltzfus writes.

A local layman said at the meeting, “Your grandchildren will ask you, Where were you when these things were happening in Selma, Alabama?”

In late January, Laura, Stoltzfus’ oldest grandchild, asked him to send her a note about Selma memories.

On the day of the march, a Sunday, a service outside Brown Chapel drew thousands. A Catholic priest read from the New Testament, Heschel read from the Old Testament, and King preached a sermon on the biblical theme of deliverance, freedom and the marching of the Israelites.

The march, which included about 3,200 people, began about noon as folks were coming out of their churches. “They looked at us with wonder and contempt on their faces,” Stoltzfus writes.

People lined the sidewalks as marchers went down the street, eight abreast.

An editorial in the local paper called the marchers outside agitators. The local clergy published a statement against the march, and business leaders published an opposing statement in the Selma newspaper.

From Brown Chapel they marched across the Edmund Pettis Bridge over the Alabama River, where Bloody Sunday had occurred just two weeks earlier.
Stoltzfus saw jeeps, helicopters and uniformed soldiers. He writes that disgust was visible on the faces of many of the soldiers and in their body language. “One took out his bayonet and made a scratch in the paint from one end of a movement car to the back,” he writes.

The marchers had access to two of the four lanes on U.S. Route 80, known in Alabama as the “Jefferson Davis Highway.” In the other two lanes were young people with large, hateful signs.

The march reached the Alabama State Capitol in Montgomery on March 25. By then there were 25,000 marchers.

Stoltzfus went back on Monday, March 22, to teach his classes on Tuesday at Youngstown University.

Local media—TV, radio and newspaper—interviewed him about his involvement in the march.

Later that year he talked to the editor of Gospel Herald. “His concern was that he had heard that some of the young university students in the movement were misbehaving sexually,” Stoltzfus writes. “I believe that was more important in his mind than the structural evil of denying citizens the right to vote.”

J. Lawrence Burkholder, who preceded Stoltzfus as president of Goshen College and who died in 2010, took part in the March 9 march in which Martin Luther King Jr. led a group of several thousand across the Edmund Pettus Bridge in Selma and then returned the group for fear of what might happen if they went any further.

Burkholder’s daughter Myrna Burkholder writes, “My father claims to have been several rows behind Dr. King on this march.”

He also participated in several other civil rights events and was arrested in March 1964 at a sit-in demonstration in St. Augustine, Fla.
At the time of the Selma marches Burkholder was teaching at Harvard Divinity School. When Martin Luther King Jr. died, he was one of several speakers at a memorial service held at Harvard Memorial Church in Cambridge, Mass. He said it was the greatest honor of his life to be asked to give a speech at this event.

Gordon Houser, with reporting from Vic Stoltzfus and Myrna Burkholder