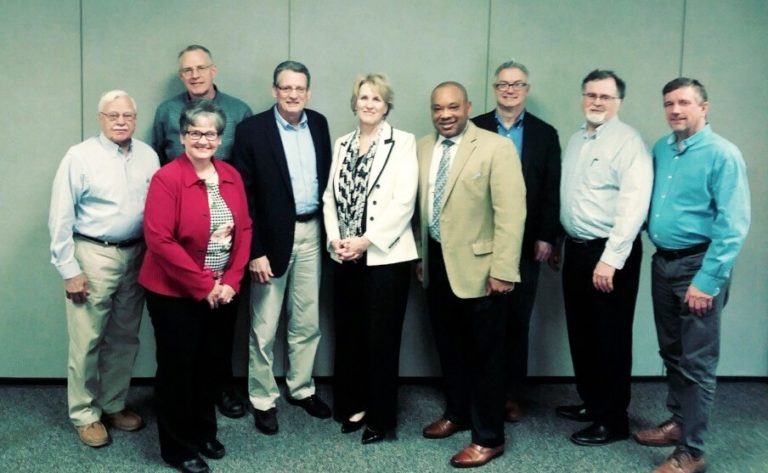 Representatives of MC USA and Lancaster Mennonite Conference (now LMC), a former area conference of MC USA, last met Jan. 15, 2018, to offer laments on the separation and discern an ongoing relationship between the two groups after LMC decided to withdraw from MC USA affiliation in November 2015. The recent March 22 meeting continued discussion of their ongoing relationship.

“We thought it was important to stay in fellowship for continued communication as part of the broader Anabaptist community,” says Sutter. “This certainly proved to be the case, as we were able to hear updates and how God is working among us in different ways.”

At the meeting, Guyton and Keith Weaver reflected on the positive engagement they have had, including at a meeting connected to Mennonite World Conference in Kenya, where MC USA welcomed LMC as a partner on the global stage. They also partnered with Everence in the Lily Endowment grant program to assist pastors.

“Keith mentioned that he did not know how I would react at that first meeting in Kenya. Would it be awkward?” says Guyton. “In an effort to move MC USA forward, I was determined to not allow the weight of past tensions to hinder our mission.”

The group discussed how LMC congregations continue to be serviced by ministries of MC USA, such as Everence, MennoMedia and Mennonite Mission Network, and several congregations have continued as part of the Corinthian Plan, MC USA’s health-care plan for pastors and church workers. The group agreed that more time is needed to address the question of LMC appointing members for MC USA agency boards.

“It is great for LMC to have representation on other Anabaptist boards, such as Mennonite Central Committee, but before we make them part of the governance structure of MC USA agencies, we need more time and dialogue,” says Guyton.

Reflecting further on LMC’s decision to separate from MC USA, LMC leaders expressed their perspective of differentiating their polity and theological posture, not rejecting MC USA. They mentioned that they still share some connections with MC USA, particularly with Atlantic Coast Conference. LMC annually participates in Atlantic Coast Conference’s Bible quizzing gatherings for young people to study the Bible together with friendly competition.

“Both MC USA and LMC are following the movement of God’s Spirit in their own contexts, and both are viable options for those seeking to be part of the Anabaptist community,” says Guyton, when asked about MC USA congregations seeking to join LMC. “I don’t perceive LMC as trying to disrupt the integrity of MC USA, but ongoing dialogue is important for the relationship between MC USA and LMC.”

The group spent time reflecting on Scripture and praying for individuals in leadership roles and for the whole of each organization’s conferences, congregations and constituencies.

“We made a mutual commitment to one another to be supportive of each other’s ministries as we work within our respective polity,” says Sutter.

Keith Weaver says, “I’m so grateful for this opportunity to meet with MC USA leaders from time to time for fellowship, prayer and catching up on ways we see the Lord at work in our midst. It’s a way to maintain positive relationships and identify ways LMC and MC USA can collaborate in the mission of God.”

Guyton says, “We will continue to work together in a number of ways as friends in ministry. We need to be able to listen and learn from each other, led by God’s Spirit and sharpening each other as iron sharpens iron.”