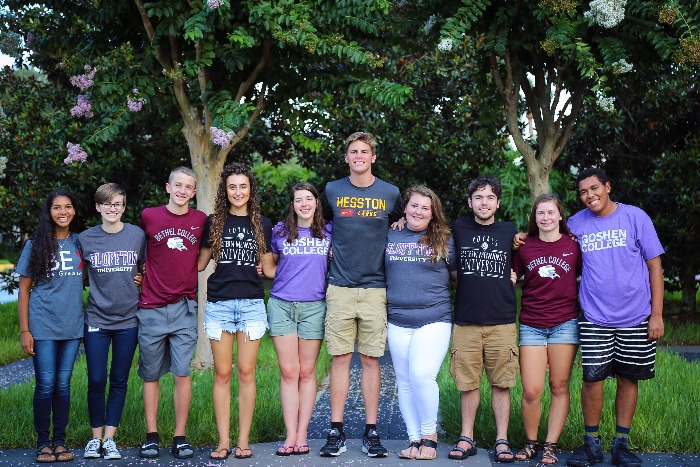 Photo: Students from all five Mennonite colleges and universities sport their college gear during the 2017 Mennonite Church USA convention in Orlando. Photo by Brian Yoder Schlabach.

Just as diversity increases across the country and within Mennonite Church USA, so too are the Mennonite colleges and universities seeing changes in student demographics with greater numbers of students from a wide variety of backgrounds, ethnicities and religious affiliations. Of the first-year students across all five Mennonite institutions, nearly 20 percent are Mennonite. More than one-third of first-year students across the five colleges and universities are students of color.

The overall positive enrollment trends across the denomination’s higher education institutions demonstrate that they have become increasingly successful at engaging and retaining a broader spectrum of the population, making Mennonite education accessible to a widening diversity of students.

“In addition to retention remaining strong, we are excited about having another record year for the percentage of international students at AMBS, with 12.6 percent of students being from outside of North America,” said Daniel Grimes, director of enrollment and financial aid.

“We are excited about the growth of our incoming class at Bethel this year,” said Andy Johnson, vice president for admissions. “With increases in our traditional population as well as our RN to BSN program, we enrolled our largest incoming class in recent memory. With the foundation laid in areas across campus, we continue to project positive enrollment growth for 2018 as well.”

“We are pleased to see a higher number of first-time freshmen enrolling at Bluffton this year, and grateful for the students and families who continue to see value in Bluffton’s unique approach to a liberal arts education,” said Erin Burkholder, director of admissions. “Policy changes at the state level regarding dual enrollment and post-secondary programs in Ohio caused Bluffton to significantly reduce offerings to high school students. As a result, we have experienced a decline in our total student enrollment.”

A new undergraduate population of 234 contributed to a total enrollment of 1633 at EMU. Despite a slight dip in total enrollment from the previous year, the university notes an increase in student retention, which can help contribute to enrollment increases for future years. Undergraduate enrollment is 884, and 749 students are enrolled in graduate, seminary, degree completion and non-credit programs.

“While our first-year student enrollment numbers are down this year, we are particularly pleased with the academic quality and diversity of this class,” said Jim Smucker, vice president for enrollment and student life. “In addition, we have increased our first-to-second-year retention rate five percentage points as we continue to work hard to provide a successful experience for each of our students.”

Hesston enrollment has rallied to its highest point since 2013, with a total student enrollment of 442, compared to 401 a year ago. New academic and athletic programs added over the last few years have assisted in the enrollment growth. Of the total student population, 207 students are new in 2017.

“With the addition of new programs, strong retention, and a solid new student group, we are excited to see a total enrollment increase of 10 percent from last fall,” said Rachel Swartzendruber Miller, vice president of admissions and financial aid.

This story is a joint release of the Mennonite Colleges and Universities.

*Correction: These numbers were updated on September 28.