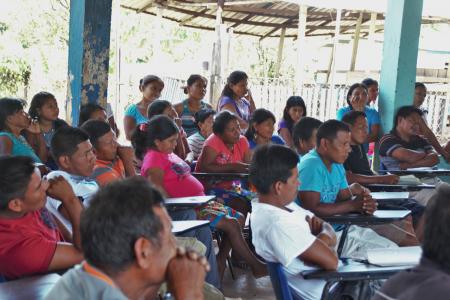 Photo: Sharing of stories and concerns in one of the Wounaan villages, in Panama. Photo: Henk Stenvers

From April 2016 to January 2017, indigenous people and allies gathered in the northern United States to protest a plan to build pipeline they believed would violate sacred burial grounds and threaten to contaminate drinking water. Mennonite church groups in the U.S. and around the world expressed solidarity with Standing Rock Sioux Tribe in their mission to protect the land and call for justice. In January, President Trump signed an executive order aimed at advancing construction of the pipeline.

Within the Mennonite World Conference family are member churches in many parts of the world who also have indigenous identities and land commitments that they struggle to protect:

“For generations, Indigenous nations and grassroots circles have been struggling on the front lines with remarkable creativity, patience and persistence…they have been protecting, holding onto, recovering and crying out against the destruction of indigenous lands that have been claimed by the fiction of settler sovereignty. The vast majority go unnoticed. The challenge for the church is to see these efforts, understand their legitimacy, perceive their goodness and join in the shared work of justice, healing and Jubilee.” — Steve Heinrichs, director of Indigenous relations, Mennonite Church Canada, Canada

“The elders say that we were given the land we live in now through our faith. For us, the land is a gift which we respect and take care of. A long time ago, most of us did not speak the ‘white’ language, but today we can talk with government and business leaders. We have the right to speak out and to be listened to before a decision is made about our land.” — Gabriela and Victor Perez, members of Convención Evangélica Hermanos Menonitas Enhlet, Paraguay

“The struggle for land and water rights dates to colonial arrival. In this spiritual, nonviolent movement, the Lakota Nation is giving insight into what every corner of the world looks like for Indigenous communities. We see relatives from the North in prayer, occupying frontlines, building schools, midwife camps and regaining traditions. We stand with you, pray with you and fight this spiritual battle with you. Sinchi samay runakuna! (Rise up, spirit of the people.)” — Mimi Salvador Lucero, Kichwa Nation, Ecuador. Mimi is a senior at Goshen College, Indiana, USA, who will graduate with a BA in peace, justice, and conflict studies

“We all need healing, since colonization damages not only Indigenous Peoples and other people of colour, but also those of us who inherit the benefits of conquest. As our delegation spent time talking, eating, praying and camping alongside Indigenous sisters and brothers, our eyes were increasingly opened to a different way of seeing the world as sacred and interconnected. There are paths within Scripture to remember this way that leads to life and to repent of the ways of death”. — Katerina Friesen, a graduate of Anabaptist Mennonite Biblical Seminary, Elkhart, Indiana, USA, and interim pastor of Belmont Neighborhood Fellowship in Elkhart. She participated in a Mennonite delegation to Standing Rock. For an article on this delegation (English only), click here.

“The Old Testament prophets urged the people of Israel not to oppress those who were targets for the powerful, a situation many indigenous groups find themselves in the world over. May we reflect on current issues and ask God to guide us in our political decisions so that they may be coherent with our choice to follow Christ. Today, just as our forebears in the faith have done, may we look to the future through the lens of our spiritual convictions. As a family of Anabaptist Christians, MWC is drafting a declaration of solidarity with Indigenous people.” — César García, Mennonite World Conference general secretary