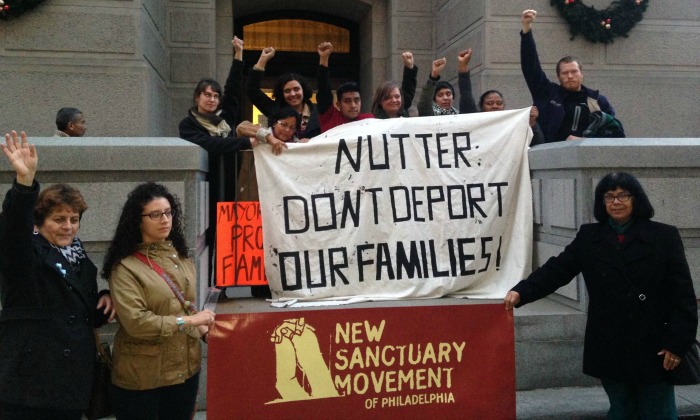 “We worked for six years to end Philly’s local deportation program, and we were successful. Our laws were the best in country and protected 100 percent of people,” says Nicole Kligerman, an organizer with the New Sanctuary Movement in Philadelphia who was instrumental in planning the Dec. 11 action.

In mid-November, the Nutter administration revealed plans to repeal portions of the law on Dec. 11, specifically targeting individuals with criminal offenses, ranging from traffic violations to longer-term sentences.

“The administration has used really vague racist language around ‘apprehending terrorists’ and criminality, which plays into the Islamophobia that is so prevalent in our country right now,” says Kligerman.

In response, the New Sanctuary Movement called on pastors and faith leaders to join an action at City Hall on Dec. 11, which included a rally with speakers and prayer. New Sanctuary leaders, including undocumented immigrants, entered City Hall and asked to speak with the mayor. During that time, eight New Sanctuary representatives also blocked entrances to City Hall to raise awareness about the potential signing.

Aldo Siahaan, pastor of Philadelphia Praise Center and a LEADership Minister for Franconia Mennonite Conference, participated in the rally with four members of his congregation. For Siahaan, it was important to be present as someone who emigrated from Indonesia and who pastors a congregation full of recent immigrants.

For members of the congregation, the reversal of protective legislative raises anxiety and memories of a member of the congregation who was pulled over for a traffic violation while driving with his family. When police raised questions about his documentation, he was arrested, imprisoned and eventually deported.

“As a believer and as Christians, we need to welcome strangers. We need to welcome foreigners,” said Siahaan in a Dec. 22 interview. “We never know. Like the Bible says, maybe we are entertaining angels or entertaining Jesus. They can appear like me or perhaps like other Hispanic families.”

Amy Yoder McGloughlin, pastor of Germantown Mennonite Church, was among the protesters who

obstructed entrances to City Hall, including going face-to-face with police officers who physically pushed and pulled some protesters.

Germantown has been a part of the New Sanctuary Movement in Philadelphia for several years and has supported congregations housing undocumented immigrants in the past. Although initially nervous about obstructing entrances, Yoder McGloughlin decided to participate in the protest after receiving a call from an undocumented leader of the New Sanctuary movement. “I don’t know how to say no to an undocumented immigrant who needs my solidarity,” said Yoder McGloughlin in a Dec. 17 phone interview.

“We were immigrants, and then we helped other Mennonites come here and find a safe place and escape persecution,” she said. “It makes no sense that we would have the urges to shut doors and put up walls when this is our story, too.”

While the protest was successful in preventing a Dec. 11 reversal, Mayor Nutter did sign an executive order allowing for deportations in Philadelphia on Dec. 22, three days before Christmas. Incoming Mayor Jim Kenney, who will take office in January, has promised to reverse this decision, but many families in Philadelphia are facing deportation in the intermediate time.

Kligerman knows the New Sanctuary movement will continue working to support undocumented workers and agitating for a return to sanctuary policies in the city.

“We are in the midst of the Christmas season, and we know that Jesus and Mary were also denied refuge,” she says. “Our history as people of faith is one of fighting for justice and our most fundamental faith leaders were people seeking refuge for themselves. Faith is nothing if not fighting for and with people impacted by these horrific policies.”