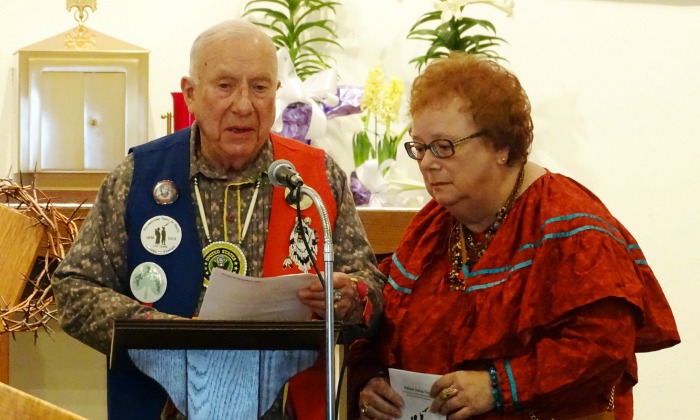 “This story should continue to be told to future generations,” said Janet Pearl in a May 11 phone interview. “That’s how the Potawatomi know this story. It was passed down through generations. My father taught his children and grandchildren, and now they are moving on to be active in the tribe and continue to tell the story so that nobody ever forgets what happened at the Trail of Death.”.

Now the Pearls are grateful that white people in Indiana, including Mennonites, many of them descendants of people who settled the land vacated by the Potawatomi, are learning and retelling this story as well. On April 22, community members from across the state gathered at St. Joseph Catholic Church in Rochester, Indiana, for the first Indiana Indian Day.

During a short ceremony to mark the occasion, two Mennonite Church USA representatives—Nancy

Kauffmann, denominational minister, and Jason Kaufman, director of the Mennonite Church USA archives—read a confessional statement acknowledging the ways that Mennonite settlers benefited from the removal of indigenous peoples. They also noted the ways the Doctrine of Discovery, a religious and legal framework that justified the enslavement and displacement of indigenous people.

“We confess that the Doctrine of Discovery is a horrible misuse of the Bible and something that God does not condone for one people to do to another. Our awareness of this document has caused us to re-examine our behaviors in the past and [think about] the future. We confess that we have never acknowledged that we benefited from the forced removal of your people when we purchased land that was stolen from you,” they read.

The statement also included a commitment to continuing education about the Doctrine of Discovery across the church and more intentional work to build relationships with indigenous people groups. Read the full statement.

The ceremony also included a short skit written and performed by fourth graders from Bethany Christian Schools, a Mennonite-connected school in Goshen, Indiana. The skit grew out of work the class had done during their study of Indiana history throughout the year to learn about the Trail of Death.

Fourth grade teacher Adam Friesen first learned about the Trail of Death when he was approached by Anabaptist Mennonite Biblical Seminary student Char Mast in 2016. Mast had participated in a pilgrimage along the Trail of Death route and wanted to translate her learning into a curriculum that could be used by elementary school students.

Friesen noticed that the Trail of Death was conspicuously absent from Indiana history textbooks, so he and Mast worked to develop a new curriculum to help students understand this piece of Indiana history. This included classroom learning, as well as a trip to visit several Trail of Death sites.

“The power of learning this story is that it’s going to be something people remember. When the students

talk about native history, they will know about the Trail of Death and the Potawatomi. And if we can help spread the story throughout Indiana, maybe next year when I tell my fourth graders about this and they go home and tell their parents about it, their parents won’t say, ‘What’s the Trail of Death?’” said Friesen in a May 10 interview.

In his introduction to the skit the class performed, student Jacoby Reinhardt said, “There are some Potawatomi people still living today, and some of them are with us right now. Our goal of this project is to tell their story, because even though it happened about 200 years ago, it could still happen today. If you have learned anything from what we have said, maybe you could share this story with other people, too.”

Event organizer Shirley Willard, a historian and member of the Potawatomi Trail of Death Association, had hoped that Governor Holcomb’s statement would include a formal apology. When that didn’t materialize, she wrote an alternative litany of apology that was read and signed by all those in attendance.

“Therefore we, the citizens of Indiana, on behalf of the state of Indiana, do issue this formal apology to the Native Americans whose ancestors were forced to leave Indiana. We ask for your forgiveness, and pledge to tell the stories of this tragic part of our state’s history so that the suffering of your people may not be forgotten,” the crowd read.

Representatives from both the Miami and Potawatomi tribes were present at the event. Robert Pearl also spoke during the ceremony.

“For the governor to agree with the citizens, it’s a landmark,” said Brian Buchanan, Principal Chief of the Miami Nation of Indians of the state of Indiana, to the Kokomo Tribune. “That’s a good start, for the future to come, but we’re still fighting the same battles we were 25 to 30 years ago.”

“This is a heartfelt first step that can be built on,” she said in a May 2 phone interview. “Can we take these challenges on? Can we take these on as our own commitments as a church since they did speak for us? I’m really quite pleased that MC USA committed to supporting our work in this place and around the country.”

Friesen also wrote a litany that was read during the ceremony. It has also been used by seminary students and Adam Friesen’s fourth-grade class on their pilgrimages along the Trail of Death route.

Creator of all, we long for new vision today,
Open our eyes and give us sight
To seek the things that make for peace,
To see the Image of God in all peoples,
Especially those persecuted and oppressed.
Make a new way for us together.
Guide our feet, O Lord, on a Trail of Life.

Additional resources for learning about the Doctrine of Discovery: