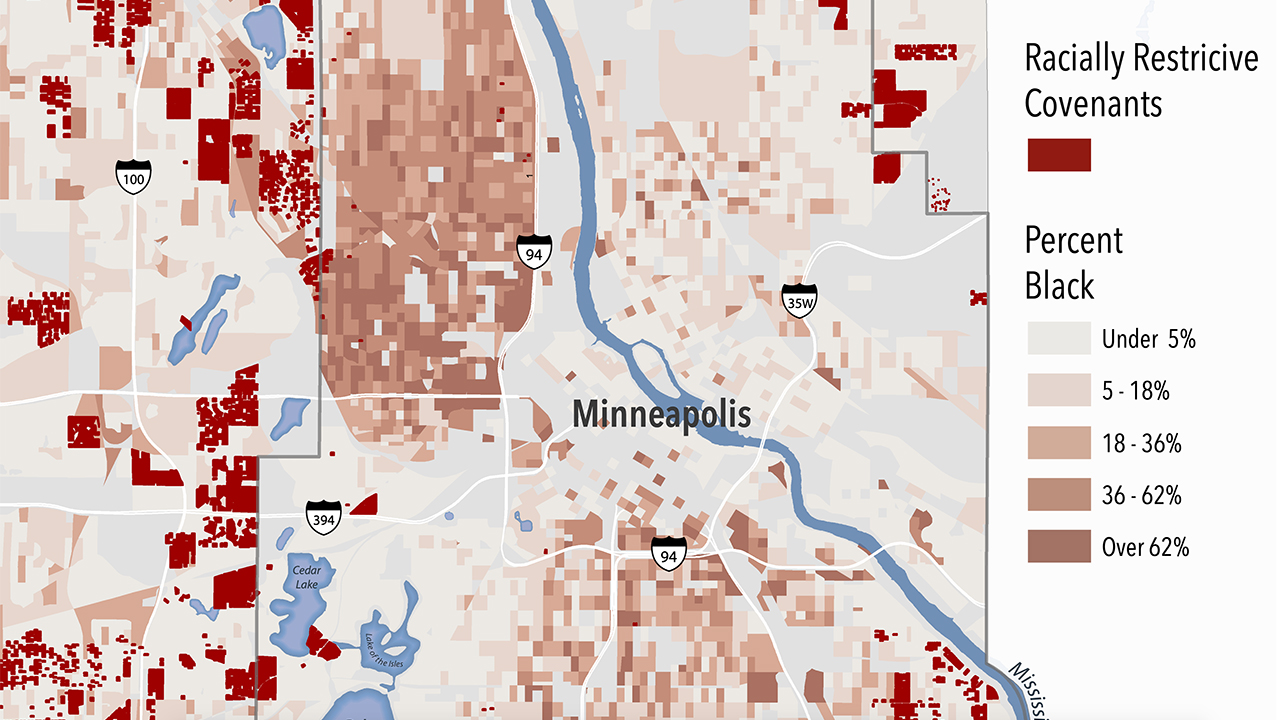 Concentrations of Black populations in the Minneapolis area in 2010 contrast with historically racially restricted properties, in red. — Mapping Prejudice Project

It was standard practice a cen­tury ago in Minneapolis to forbid people of color from living in desirable neighborhoods. Racially exclusive covenants still exist, buried in legalese and decades of history. In recent months, property owners have teamed up with city officials to eliminate the problematic wording.

The 1926 deed for Joan Kreider’s property “shall not at any time be conveyed, mortgaged or leased to any person or persons of Chinese, Japanese, Moorish, Turkish, Negro, Mongolian or African descent.”

“The practice was pretty successful,” said Kreider, who attends Faith Mennonite Church and lives in south Minneapolis, about two miles from the police station that burned last year in the aftermath of George Floyd’s death. “. . . Mine is a modest two-bedroom house. It’s not like it was protecting mansions.”

The practice faded after the 1930s, likely because the city ran out of new plats to issue. Enforcement of the covenants went away, but the wording remained.

After the state legislature passed a law in 2019 allowing homeowners to petition to have the wording removed, the Minneapolis city attorney’s office moved in March to offer free legal services and paperwork.

“I immediately went online and requested it,” Kreider said. “But I thought, ‘This isn’t just my problem, it’s the neighborhood’s.’ I copied the paperwork and started taking it around to neighbors.”

The response was positive, with many neighbors having already submitted their own paperwork or expressing appreciation for the help because they didn’t know what to do. She shared the option with others at Faith Mennonite and is planning to send many petitions in together.

Kreider struggled with talking about the effort, because eliminating largely symbolic racist covenants seems such a small thing compared to the broader work of racial justice. But as a Mennonite whose ancestors moved into locations cleared of Indigenous people, she understands her connection to land issues.

“The racial disparities in our cities are great, and so much of it is actually related to the land,” Kreider said. “I’ve been sensitized over the last number of years about the way our relationship to the land has pushed out Native Americans as Europeans took over.

“Ownership of land has been one of the things that has been key to entering the middle class, and it was not available oftentimes to African Americans, or they had land taken. Who owns the land is a key justice issue.”