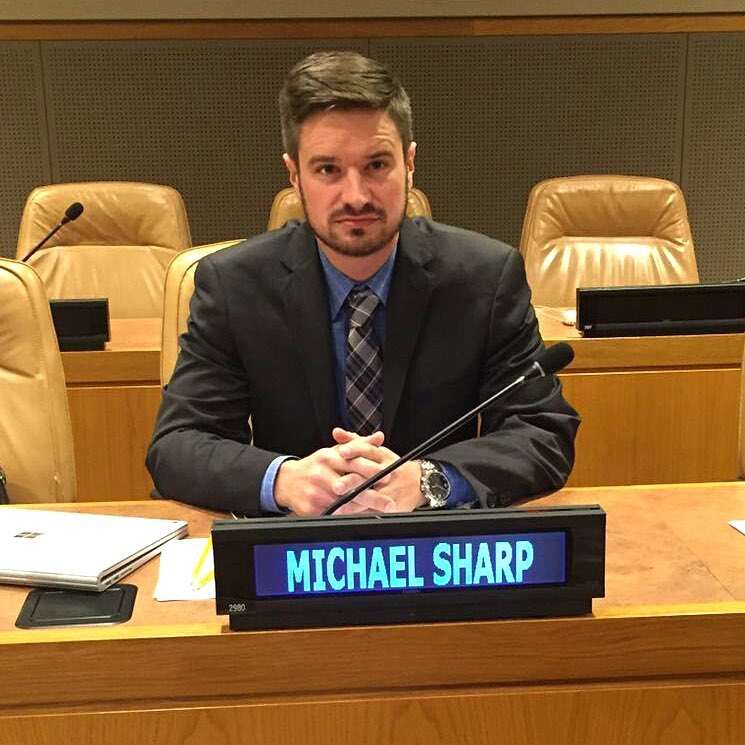 Michael Sharp speaks at the UN Security Council in August 2016. Photo provided by the Sharp family.

New information continues to emerge out of the Democratic Republic of Congo since the deaths of Michael (MJ) Sharp and Zaida Catalán last March. Sharp (see “MJ Sharp: the witness of a ‘kind soul’”), a Mennonite, and Catalan were working with the United Nations when they were kidnapped and killed in March.

According to an article in The Independent published online Sept. 14, the two “were deliberately misled about the safety of the place where they were shot dead.” The article cites an investigative report published on the Radio France International (RFI) site which suggested the pair may have been set up.

The news brings a new round of grief for John and Michelle Sharp, MJ’s parents, who live in Hesston, Kansas.

“We’re agonizing about the deception,” said John Sharp in a Sept. 15 phone interview. “It’s like starting our grief process over.” But they are glad the stories are coming out, he said. “We were aware of some of this, and now can talk about it.”

Sharp said that Sonia Rolley, RFI correspondent who led its investigation, was friends with MJ Sharp and Catalán. “She’s a great reporter,” he said. Since May, Rolley’s press accreditation has not been renewed by Kinshasa.

RFI published the transcript of a conversation the pair had on the eve of their death with a Kamwina Nsapu follower speaking Tshiluba, which was translated by several other people into French.

“At least three of the participants intentionally misled the two experts about the level of security in Bunkonde,” RFI said of the area where they were killed.

“At one stage,” reports The Independent, “the main speaker—an elderly healer called Francois Muamba—tries to discourage them from going to Bunkonde, raising the possibility of an ambush.”

But his words “were not translated”, RFI said.

Instead, Sharp and Catalán were told: “As far as guarantees go, you can go to Bunkonde because there’s nothing going on there.” RFI said the translator was “currently working with the (government) department of migration.”

Another person who was party to the conversation and said to be close to the Kamwina Nsapu militia was “an intelligence agent” who was “in charge of supervising the two experts’ mission in Bunkonde.”

In June, U.N. experts compiled a report that said the two workers had spoken to members of the clan leader’s family on the eve of their departure from Kananga on March 12. They had obtained an audio tape of the meeting.

The report described the murder of Sharp and Catalán as a “premeditated setup,” saying that members of the state security services may have been involved.

According to The Independent, “the Congolese authorities have said the pair were killed by militia members, with a UN inquiry published last month reaching the same conclusion.”

Meanwhile, according to a Sept. 13 online article by Colum Lynch in Foreign Policy, the United Nations “has decided to send a team of investigators to Congo to join the government’s troubled, inconclusive probe into the March deaths.”

However, family members and human rights advocates believe this falls short of a full-fledged independent international investigation. “Some rights advocates and U.N. officials have privately expressed concern that Congolese authorities may be implicated in the crime and that any government investigation may therefore be compromised,” writes Lynch.

John Sharp said he and Michelle were at the United Nations three weeks ago with Catalán’s family. They were invited to come to the U.N. special session on the Congo. U.N. staff told them they’d never heard such emotion expressed for U.N. workers, Sharp said.

Sharp and Catalán “were members of a U.N. Security Council panel of experts investigating rapes, mass killings, and the illicit extraction of natural resources in Congo.”

A board of inquiry concluded that Sharp and Catalán were likely murdered by a local Congolese militia, downplaying the likelihood of a government hand in the killings.

But U.S. officials aren’t satisfied with that conclusion. In an Aug. 17 statement, Nikki Haley, the U.S. ambassador to the U.N., said, “The murder of U.N. experts—especially like Michael and Zaida, who risked their own lives in order to help others—cannot end in a bureaucratic procedure.”

“Over the past year,” says The Independent, “the wave of violence in Kasai has claimed more than 3,000 lives and displaced an estimated 1.4 million people, with rights groups citing evidence of extrajudicial killings, rapes, torture and the use of child soldiers.”

“The story keeps evolving,” John Sharp said. The families keep asking for accountability. “Our hope,” he said, “is that the world will look at the Congo [because of] this and that it will help bring justice. We hope for some kind of transformative change.”

Sharp said, “We see that [the push for an independent investigation] as a doorway into the rest of the violence in the country, the plight of Congolese who have been suffering so terribly.”