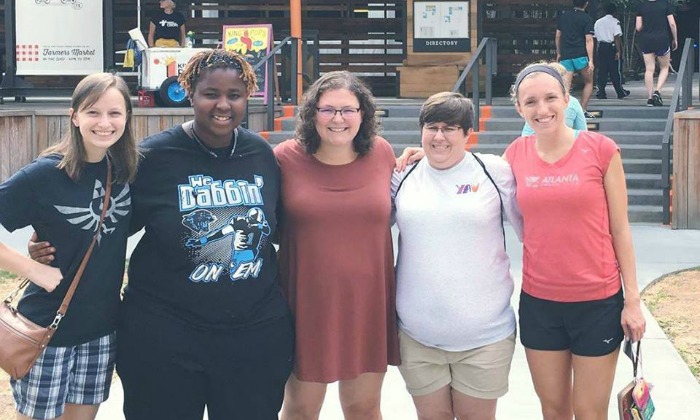 With the sunrise as a backdrop, Hannah Chappell-Dick weaves through Atlanta’s downtown flanked by a group of men and women.

The joggers are a rainbow of faces, people with whom she might not have run back in her hometown of Bluffton, Ohio. They are smiling and encouraging each other. Smiles also come from the diverse faces they see standing outside the shelters, waiting for breakfast.

Chappell-Dick volunteers at the Atlanta chapter of Back on My Feet, a national nonprofit operating in 12 cities coast-to-coast that combats homelessness through the power of running, community support and essential employment and housing resources. She’s serving through Mennonite Mission Network’s DOOR/Dwell program, which provides opportunities for young adults to experience the work of God in urban settings.

Chappell-Dick is a program coordinator intern, performing functions such as coordinating volunteers, signing up members for races and writing a weekly newsletter. She is learning and observing a lot about herself, others and the world around her in regard to racial and economic injustice.

“Living in Atlanta has, for the first time, given me a chance to experience a culture that is not always

White-dominant,” Chappell-Dick said. “I think it’s really important to put yourself into spaces where your assumptions are challenged, so that we can begin to chip away at the racism that is systemically ingrained in our cities and ourselves.”

Serving in Atlanta, it is difficult to not be touched by the Civil Rights movement. The late Rev. Dr. Martin Luther King, Jr., an Atlanta native, is internationally recognized as the movement’s leader. Before King was assassinated in 1968, he and some other civil rights allies had broadened their focus and organized the Poor People’s Campaign to demand the federal government provide economic justice and human rights for poor Americans of all backgrounds, regardless of race. The shift occurred after they realized that decisions that ended segregation laws had not improved economic conditions for most African-Americans. Nearly five decades later, the injustice remains despite the many visible gains, such as Black leadership in City Hall and many African Americans attaining middle-class status.

The majority of America’s poor and homeless are White people, but African-Americans are disproportionately poor in relation to their percentage of the population. Of Georgia’s 9.7 million residents, 14,000 are said to be homeless, according to a 2015 Georgia Department of Community Affairs report. African-Americans are 30 percent of the state’s population, but comprise 65 percent of the state’s homeless.

Chappell-Dick said that she knew about the Civil Rights movement in the abstract, “thanks to my activist parents, school lessons and youth group discussions.” She grew up believing that racism, which fuels poverty, would soon die out because she thought people were actively working to avoid perpetuating it. However, in Atlanta, she is understanding firsthand that this is not the case. As a nation, the majority of Americans are not working to end racism and economic injustice.

“Often when I ride the bus to work or track practice in the morning, I am the only White woman,” Chappell-Dick said. “I’ve begun to see how surprised and sometimes even concerned people are when they hear that I am riding the bus, and it’s usually because they themselves have never even considered using this form of public transportation.”

celebrated as a tourist draw, where people engage the history that “they want to remember.” For example, they reminisce about King the American “dreamer” who gave beautiful nonviolent speeches, rather than the activist who spoke out aggressively against racism, war and poverty in order to achieve the Beloved Community.

“I hope that by looking closely at our history of racism, classism, and militarism in Atlanta, we’ll be able to connect with Christ and his call to actively love all of our neighbors, even the ones that don’t look or act or worship like we do,” Pittman said.

“I think that the best way to challenge racism is to work together toward common goals (both abstract and tangible) with people who look different from you,” Chappell-Dick said. “When you’re rolling up your sleeves and getting to work beside another person, you become allies.”