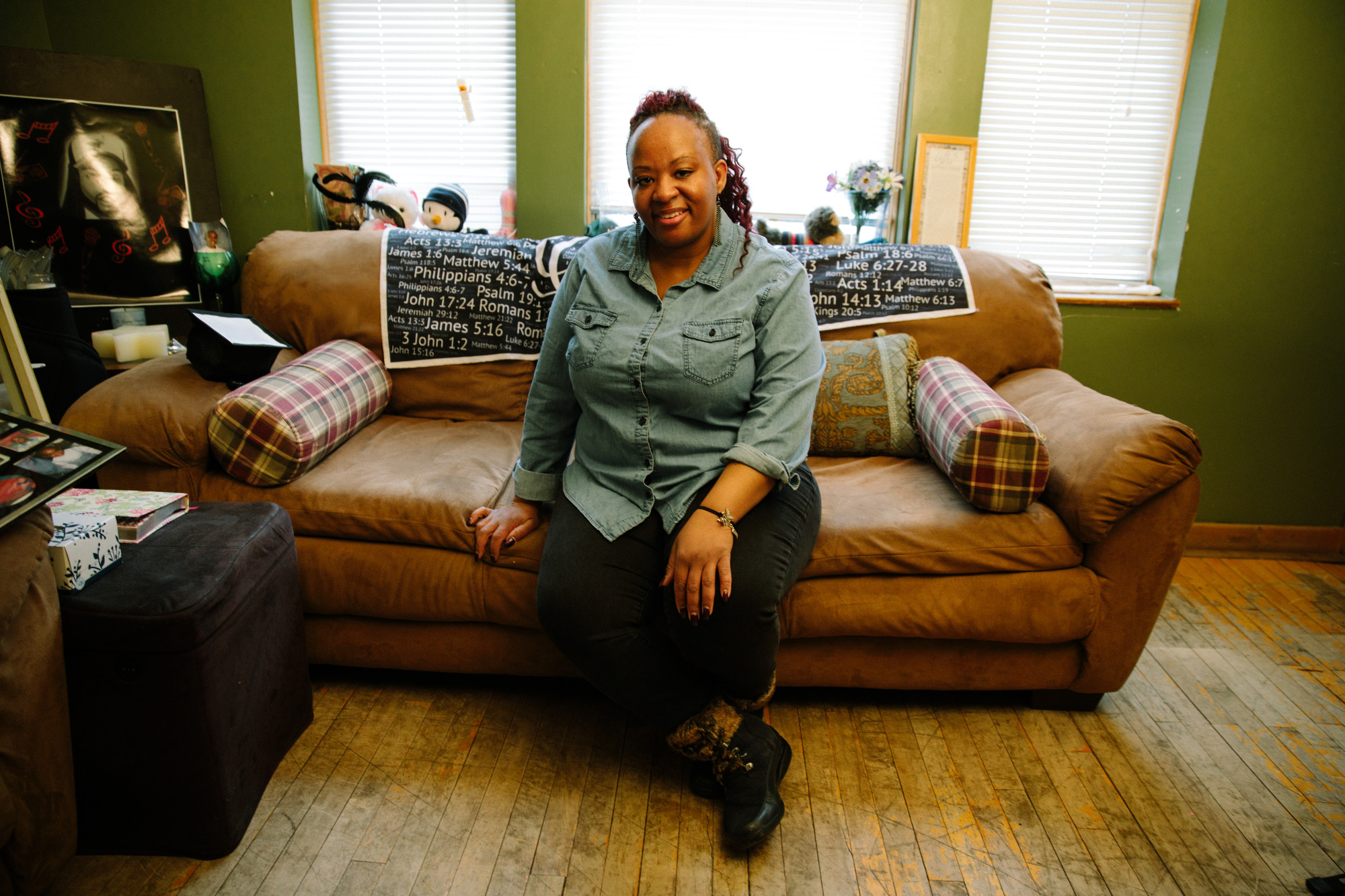 Corniki Bornds sits in the living room of her home in the North Lawndale neighborhood of Chicago’s west side. Corniki’s son, BJ, was killed in 2017 in a non-targeted shooting at Franklin Park in the North Lawndale neighborhood of Chicago. Corniki found support through other mothers who had also lost children to gun violence in Chicago in a support group at Parents for Peace and Justice. MCC partners with Parents for Peace and Justice to help support their important advocacy work.

Photo: Corniki Bornds sits in the living room of her home in the North Lawndale neighborhood of Chicago’s west side. MCC photo/Sarah Severns.

Corniki Bornds sits on the sofa in her living room, where reminders of her son, her only child, adorn the walls and shelves around her. Just around the corner is his room, a place she couldn’t enter for six months after he went to play basketball with his friends and never returned home.

Bornds fights back tears as she remembers her son Fontaine “BJ” Sanders, who was murdered almost two years ago. “He was the joy of my life. He was like that piece, that if nothing else happened in my life, having him my life was complete.”

But his life was cut short, just days before his 20th birthday. His graduation from Robert Morris University (RMU) was coming up in a few weeks. He had finally worked up the courage to fly in an airplane, but he never got the chance to test his mettle.

That Monday morning, during college-break week, Sanders and his friends were walking to the outdoor basketball courts at Franklin Park, several blocks from his home. A typical teenager, Sanders was looking down at his phone when a car drove past, then circled around and drove past again. His head was still bent when shots rang out, hitting him in the top of the head.

The detectives at the hospital told Bornds her son was “just at the wrong place at the wrong time,” she recalls, but she can’t accept that.

Bornds admits that she wanted to let anger control her after the death of her son. She didn’t know how to go about living a positive life when the person her entire life centered around was gone.

Although her family members did their best to support her in the weeks and months that followed, Bornds had this underlying need to be around people who truly understood what it was like to lose a child. She had a flyer about a support group for parents who have lost children to gun violence, and on a particularly tough day, she decided to see what the group was all about.

When she got to the group’s location, the door she tried was locked. She was about to leave when someone going into the group took her along inside. That moment was a turning point for Bornds, who distinctly remembers an immediate feeling of, This is where I’m supposed to be.

Although it took her several meetings to feel comfortable sharing her story at the meetings coordinated by Parents for Peace & Justice, she soon let her guard down and found the connection she’d been craving. She credits PPJ, a Mennonite Central Committee Great Lakes partner, with helping her cope these past two years.

“So when they hug me, their hug feels different. When they tell me it’s going to be OK, it feels different because they’ve been through this before; so I know they know what they’re talking about.”

The group’s support goes far beyond monthly meetings. The members even went to one of the mother’s family reunions last summer. “Wherever you are and you need us, we are there,” says Bornds.

Just a couple of months after Sanders’ death, Bornds attended a day-long retreat with PPJ made possible by a grant from MCC Great Lakes. It included trauma healing trainings, counseling sessions, grief workshops and a visit to a salt cave to highlight the importance of self-care for about 25 survivor families who lost family members to gun violence. Bornds lights up when asked about the retreat. “It was amazing. It just gave me so much help to this point.”

Bornds also had the opportunity to participate in a Strategies for Trauma Awareness and Resilience (STAR) training sponsored by MCC in September 2018. A five-day educational and experiential training, it brings information about restorative justice, emotional and physical security, spirituality and conflict transformation to address trauma, to break cycles of violence and to build individual and collective resilience.

She recalls one activity that involved catching and throwing a ball while remembering each person’s name and changing positions. Some people got hit with the ball and others couldn’t catch it because it was thrown too high.

“Life is still happening. Sometimes it happens fast, but you still have to remember what you were doing before you started grieving. If you don’t keep up, then you’re going to get hurt or you’re going to get left behind. And that’s what happens when you grieve. Life doesn’t stop. You just have to learn how to grieve and live.”

Bornds says she learned a lot about the importance of self-care. She had a moment of clarity when she realized getting help following the traumatic murder would assist in preventing her from sliding into destructive habits.

She still refers to the books she received through the training. She utilizes tactics like fingerhold practice (breathing and squeezing fingers corresponding to certain emotions) or meditation to manage her stress and overwhelming moments.

“There’s no place to start and end with grief,” she remembers. “It can happen in any order.”

One primary reason PPJ is so tuned in to the needs of families is Elizabeth Ramirez. She knows the pain of losing a child, as her son Harry “Dee Jay” Rodriguez was killed by a gunman in 2011. Not finding support in her grief, Elizabeth posted her frustrations on Facebook.

Robert Torres, a friend of a friend, saw Ramirez’s post and felt compelled to reach out to her. Together the duo founded PPJ in 2012.

Torres is an entrepreneur and businessman, but, as the father of two girls, he knew he wanted to do more to address the gun violence epidemic in Chicago. Initially he used his skills from the business world to help amplify Elizabeth’s voice in seeking justice for her son’s death by arranging interviews with media outlets.

Soon after, Ramirez began hosting the first support group for mothers who have lost children to gun violence at her home. “I’ve learned the biggest thing you need to do is listen,” she says. That might mean a phone call from a mother at 2 a.m., where Ramirez will cry with a mother or let her scream to get her anger out. “We don’t call each other friends,” she says. “We call each other sisters.”

As the organization continues to grow, its members now hold vigils at sites of gun deaths, plan community events, host after-school sports programs and advocate for better legislation. PPJ is trying to provide more resources and jobs in the community too. “That is our mission, to bring more into the community,” explains Torres, “to help the mothers and families who have lost their children to violence.”

Mondays are still tough for Bornds. If she hears a firetruck come out of the station across the street from her apartment on a Monday, it takes her right back to that terrible day.

But Bornds works hard to keep Sanders’ memory alive. Last year she planned a basketball game at Franklin Park, the same park where Sanders was killed. This April she’ll host the second annual event that brings together Sanders’ friends from grammar school, high school, the Amateur Athletics Union and college to play the game he loved.

“(There were) so many people at the park that they had to tell me our capacity is only 250,” remembers Bornds with a smile. “It’s just so amazing to see people come from everywhere. And it’s one day where you’re back in the community and nobody is looking at the park as the place where BJ died.”

Even though she knows he’s gone, some days Bornds expects to see Sanders walking back from the park with his signature walk. “I tell everybody when I go there, ‘I’m not going to claim this as the place where my son died. It’s the place my son lived,’” says Bornds. “I have more memories of his life here than his death, so I’m not going to associate it with that.”