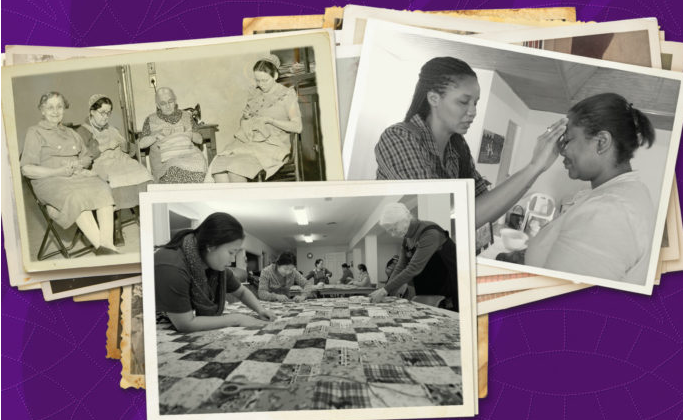 The book will be released at a book launch and author signing at the Mennonite Women USA centennial celebration during the Mennonite Church USA Convention in Orlando, Florida, on July 5, 2017.

The 51st volume in the Studies in Anabaptist and Mennonite History series, Circles of Sisterhood traces the movement of Mennonite women’s groups from the sewing circles of the early 20th century to today.

“Anita Hooley Yoder puts to rest any lingering question as to whether there has been a Mennonite women’s movement,” said Lee Snyder, president emeritus of Bluffton (Ohio) University. “The answer is yes.”

The book, subtitled A History of Mission, Service, and Fellowship in Mennonite Women’s

“This landmark history, carefully researched and clearly written, tells the story of the courageous and gifted visionaries who brought about a transformation in the role of women in the Mennonite church,” said John D. Roth, professor of history at Goshen (Indiana) College. “For anyone trying to make sense of the complex fault lines among Mennonites today . . . this book offers an illuminating window into the slow and sometimes painful process of transformative change.”

Throughout the chapters are photographs of relevant groups and events. The book includes “interludes” between chapters, which discuss in more depth issues that come up in the chapters, such as ways these women’s groups have combated stereotypes and their relationship to the feminist movement. The book also includes an index, a timeline of important dates, and a list of abbreviations and short descriptions of relevant organizations.

“Women’s groups weren’t just important because they developed women for leadership elsewhere,” Hooley Yoder said. “The work they do is important in itself, for the women involved and for the world, and it’s critical that we not see church women’s groups only as a step to something that is somehow bigger and better.”

The book discusses frequently the “dual purpose” of Mennonite women’s groups—service and fellowship.

“Mennonite women need each other!” said Reta Halteman Finger, author of Creating a Scene in Corinth

and former editor of Daughters of Sarah. “Anita Hooley Yoder has traced our history from the early 1900s to the present, from sewing circles at which a male pastor had to open in prayer to Mennonite Women USA, Sister Care, and other current groups where women meet for service and spiritual support.”

Hooley Yoder is tentatively hopeful for women’s groups in the future. “There are huge challenges in today’s society for any sort of communal or religious activity,” she said. “But I hope people can keep finding ways to be together—with each other and with God—for the good of themselves and the good of the world.”