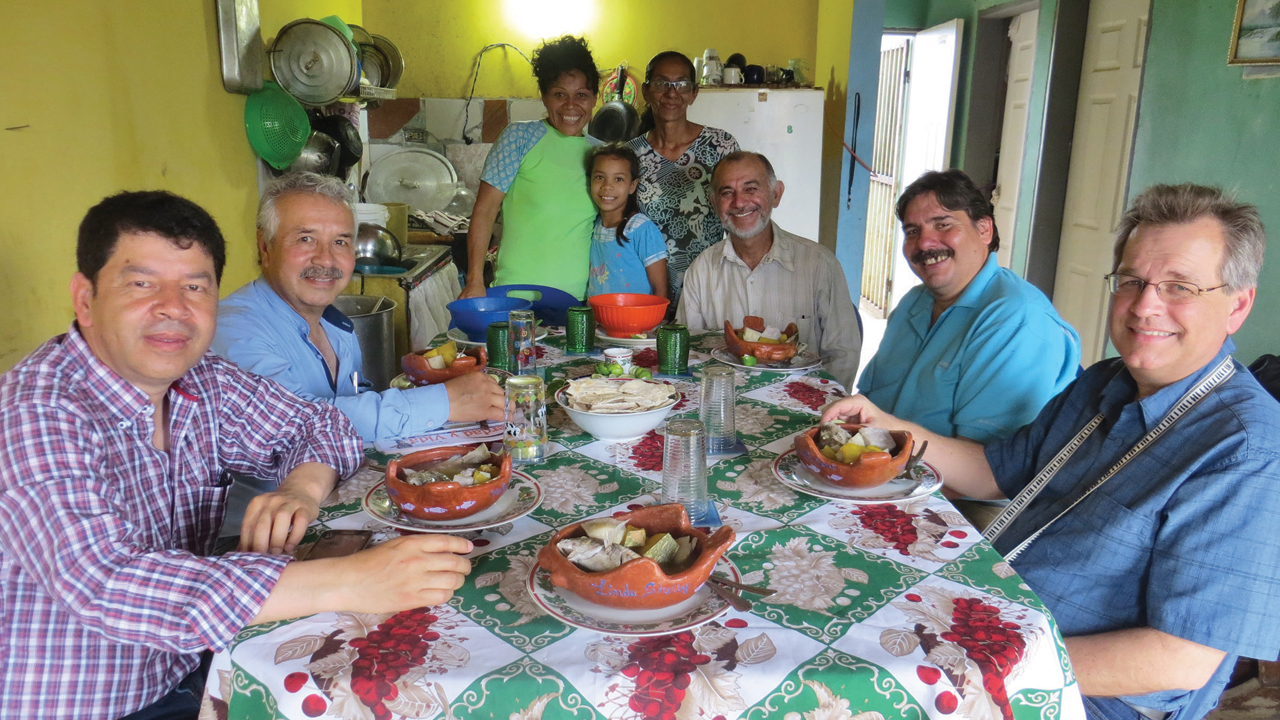 Erwin Mirabal, second on the right, hosts a partnership visit in 2018 in Venezuela along with Yermanda Acosta, Verdany Acosta, Darlenis Estaba de Bauza and Euclides Bauza from the Comunidad de Paz church on Isla Margarita. Visitors include Oscar Herrera and Carlos Moreno from the missions committee of the Colombia Mennonite Church, left, and David Boshart from Central Plains Mennonite Conference, right. — Linda Shelly

I looked at my phone early on the morning of Aug. 5 and saw that Pastor Erwin Mirabal, president of the church conference Red de Misiones Menonita de Venezuela (Mennonite Mission Net­work of Venezuela), had died of COVID-19. We had been praying for him for two weeks. His condition was stable the day before. His death was a shock for many.

The global pandemic is peaking later in Latin America than most other regions. Reports coming to Mennonite Mission Network told of economic hardship; pandemic restrictions stopped people from working as day laborers or selling in the streets. MMN supported partner churches have been reaching out to help the most vulnerable people with food.

As the virus spreads more rapidly in Latin America, prayer chains are active for people who are sick, and we mourn deaths together with partners. MMN relates with Venezuela through a partnership including Iglesia Cristiana Menonita de Colombia (Colombian Mennonite Church, or IMCOL) and Central Plains Mennonite Conference of Mennonite Church USA.

We have made partnership visits together in Venezuela since 2013. Colombian leaders have known Mirabal much longer. On Aug. 13, we were among those who gathered on Zoom to record tributes about him for the Spanish podcast Merienda Menonita.

As a young man in the 1980s, Mirabal traveled to Colombia for a workshop taught by John Driver, who served with Mennonite Board of Missions, which led him to passionately embrace and practice the Sermon on the Mount. He sought more opportunities to study, and the Seminario Bíblico Menonita de Colombia under Alix Lozano’s leadership developed seminary education in Venezuela. Mirabal guided students in developing churches, and soon the Venezuela Partnership was formed.

Mirabal inspired many people in Venezuela and beyond, as these testimonies demonstrate:

— Lozano said: “My memory of Erwin is the fascination he felt for Anabaptism. He found in following Jesus his reason for being and his practice of life. Another aspect that was very challenging was his practical living with the most marginalized people in society through forming humble faith communities, such as Isla Margarita and then in Caracas. I would like to bring to memory the words of [16th-century Anabaptist] Hans Denck, ‘No one can truly know Christ unless they follow him in life.’ I think this is a description of Erwin Mirabal.”

— Holly Blosser Yoder, who coordinates Central Plain’ involvement, shared: “I saw Erwin as a type of Paul the apostle, traveling among groups of believers, teaching them and encouraging them, building up their fellowships, empowering them for compassionate ministry and service.”

— Now with Anabaptist Mennonite Biblical Seminary, David Boshart traveled three times to Venezuela in his former Central Plains role. He said: “I was impressed with Erwin’s humility, combined with his entrepreneurial vision. This unusual combination of gifts has been a key factor in the amazing growth of the food-grinding enterprise, the cooperative games for peace ministry and, most important, the seminary program. I was always impressed by the way Erwin modeled humble, servant leadership.”

— Oscar Herrera, representing the IMCOL missions committee, said, “Erwin was convinced that Anabaptist- Mennonite theology is relevant in this historical moment in Venezuela amid the violence that began in this time of crisis in this country.”

Mirabal’s wife, Haydee Vegas, talks about the Venezuelan churches’ deep desire to continue despite the pain of loss. Their daughter, Helena Mirabal, shared, “Seeking Jesus is the best way. Outside of him there is nothing, not even in moments of pain and affliction.”