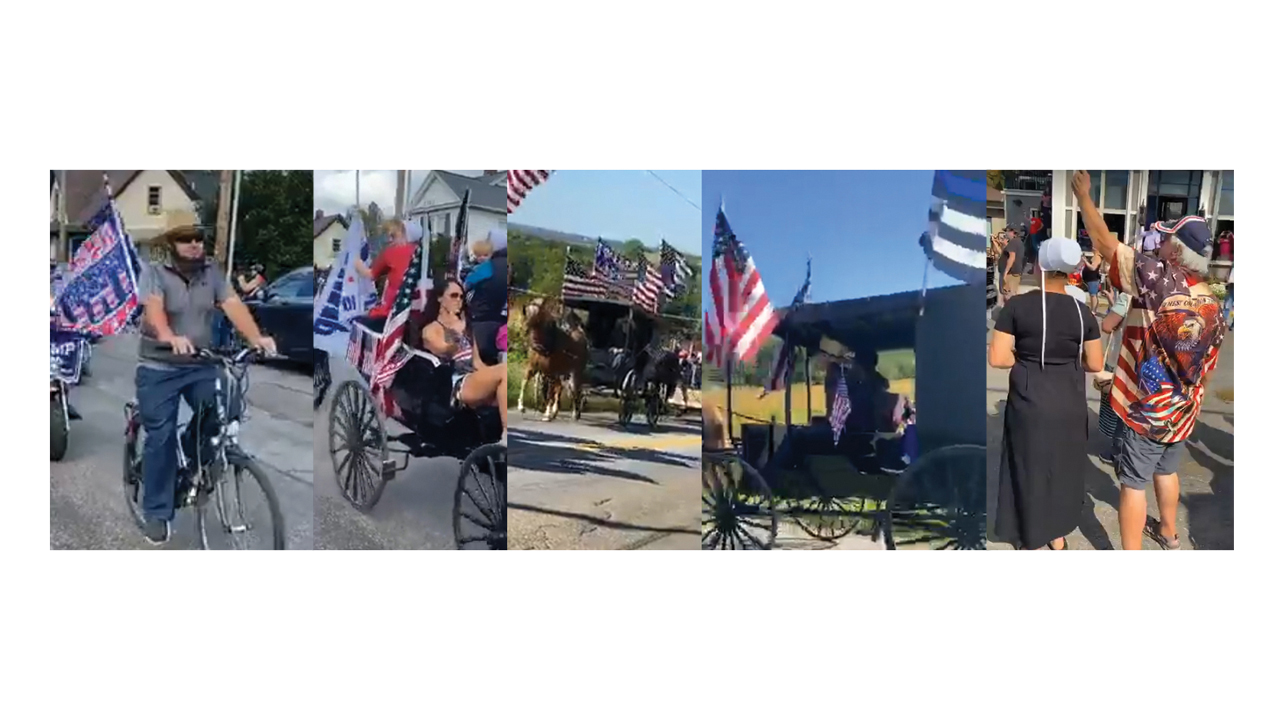 “Trump 2020: No More Bull****” read one of several flags flapping from a buggy driven by a woman in Amish clothing Sept. 26 in Fredericksburg, Ohio. A simple sign on the front of the buggy read “Amish for Trump.”

It was one of about five buggies in a pair of late-September village parades that may not have fulfilled organizers’ goal of demonstrating Amish enthusiasm for Donald Trump enough to bring the president just across the county line to a Holmes County campaign stop, but did show at least a handful of young Amish people are willing to take unprecedented steps in public political activity.

“After this is over, we’ll have a rally at the ballpark,” said parade organizer and Bikers for Trump founder Chris Cox to bystanders lining the route, as seen in a live online video. “The Amish ladies made some desserts, and we’re giving away a Donald Trump-signed hat after we do the Pledge of Allegiance.”

Because Amish have a tradition of mostly avoiding elections but hold conservative values and are concentrated in battleground states, Cox has been working for about four years to get Amish to vote in greater numbers. He even facilitated an Oval Office meeting of four Amish men from Ohio and Pennsylvania with Trump last December.

“I explained to them that they could vote and stand on biblical principle . . . because, see, I identified the one thing they hate the most is abortion.”

The comments were part of a video publicizing a Sept. 19 parade that Cox hoped would include at least 130 buggies stretching a mile long and perhaps convince the president to hold a rally at the Mt. Hope Expo Center. Trump flags were available for the first 100 people. Some of the flags adorned the handful of buggies that ended up taking part in a parade that didn’t quite live up to the hype.

The following Saturday’s parade was swelled by many motorcycles and pickups but had even fewer single- horse-power vehicles. The two that participated carried young riders in a mix of Plain and non-Amish clothing.

One member of the Holmes County community who saw video of the first parade noted it appeared that four of the nine participating buggies were driven by Amish. He requested that his name not be used to maintain his relationships in Amish circles.

“Several were by Swartzentruber Amish youth who really have no clue, but it appears to be about them being counterculture to their world,” he wrote by email. “There is a small contingent of Amish in our community who are really vocal about Trump support.”

He said he had heard rumors of Trump campaign officials meeting with local New Order Tobe Amish leaders about a possible campaign event with Amish attendees.

“That would tear our community apart,” he said. “I have spoken to several Amish bishops and leaders since then, and they are worried. This campaign is different from others in our community. . . . A few more daring Amish are actually putting signage and flags around places. A lot of young Amish who are in the rumspringa [pre-baptism, non-Amish life experimentation] age who have vehicles, especially big pickups, are flying Trump flags as they drive.”

His comments match what Ohio contacts are telling Steven Nolt, senior scholar at the Young Center for Anabaptist and Pietist Studies at Elizabethtown College.

“Some observers have been surprised that there would be any Amish affinity for Trump, given how different his lifestyle is from theirs,” he said. “They point to his multiple divorces, his vulgar language, the fact that much of his business experience has involved gambling casinos.

“True enough, yet it is also the case that the gap between the lifestyle of any major political figure and the Amish is vast.”

Ninety percent of registered Amish voters in Lancaster County were Republicans in 2016, 9% were independent and 1% Democrat.

“My sense is that Amish who like Trump respect his experience as a businessman and see him as an outsider who is not a traditional politician,” Nolt said. “Those who disapprove of him are not apt to publicly criticize him because of Amish teaching to be respectful of government.”

One unnamed Amish leader who will participate in an election for the first time in November told the Wooster Daily Record he wouldn’t vote for Trump. He’s concerned by the uproar created by Trump support, noting the Amish way is inconsistent with rallies and parades using buggies decorated with U.S. flags and political endorsements.

Trump supporter Sophie Miller, 17, who rode in a horse-drawn wagon in the Sept. 19 parade, told the Wooster Daily Record she isn’t Amish but has Amish relatives. Her father left the Amish community. She rode in the parade with two Amish cousins who also aren’t old enough to vote. She’s encouraging her Amish friends who are old enough to vote to do so.