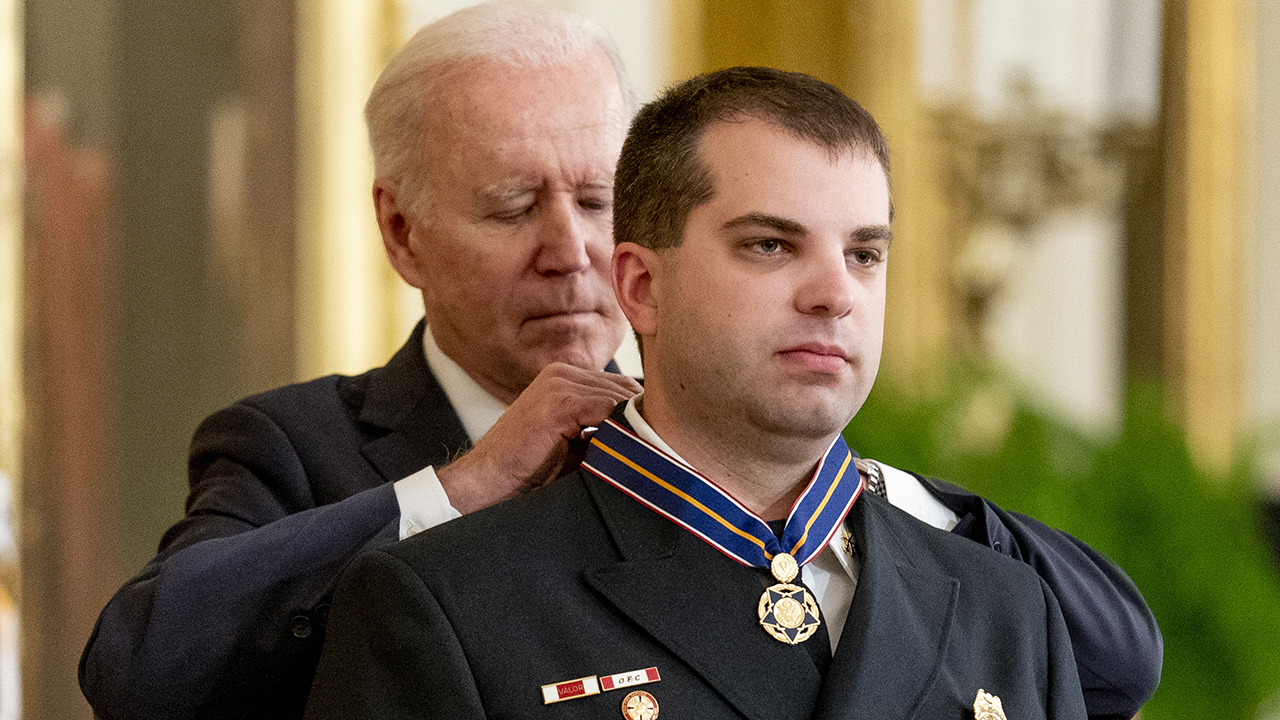 Congregational meetings can save lives.

One such meeting put Ohio firefighter Ryan Sprunger in position to help pull three people from a frozen pond in 2019. President Joe Biden honored him for the act with the Medal of Valor on May 16 at the White House.

The Medal of Valor is the United States’ highest honor and recognition of bravery for public safety officers such as firefighters, law enforcement officers and emergency medical service personnel.

As board chair of Salem Mennonite Church in Kidron, Sprunger needed to stay after the worship service to run a business meeting a few days before Christmas. As he walked out of the church to his truck, the East Wayne Fire District assistant chief received a call that two children had fallen through thin ice on a farm pond.

“It was quicker for me to go from church than from the station; that’s why I went right to the scene,” he said. “I didn’t have thermal gear, just a throw rope.”

Sprunger graduated in 2011 from Hesston College and completed an online bachelor’s degree in ministry in 2018 from Tabor College. He has been a credentialed chaplain in Ohio Conference of Mennonite Church USA and graduated from Lincoln Christian University Seminary last year with the goal of being ordained for fire department chaplaincy.

As the first person on the scene, he discovered a grandfather making his way out on the ice.

“They were in the water. The ice was thin. And right at that time my fire chief showed up.”

Chief Kyle Nussbaum had a flotation device, but it was only rated for a 40-pound child.

“He stayed on the shore, I walked to the edge,” Sprunger recalled. “My thought was to get them the rope, but as soon as I reached him, he started going under.

“So I just jumped in after them to get them. I grabbed the kid, threw him and the grandpa up on the ice. At that point the grandpa asked where the other kid was, and we learned there were three people.”

Managing to keep moving in the frigid waters, Sprunger remained there until a rescue crew arrived with ice suits. As they extracted the other child, Sprunger helped remove the remaining two from the pond.

Four-year-old Jenson Hodge, who had wandered out on the ice, lived for about two days before dying on Christmas Eve. His 6-year-old brother and grandfather both survived.

Sprunger learned he would receive the award on May 9, one week before the ceremony, which had been delayed by the COVID pandemic.

The East Wayne Fire District developed the Jenson Rescue Rope after the tragedy and collected donations to install the 75-foot ropes at area ponds and lakes. The fire department initially created 40 ropes, but interest and need turned out to be so great, nearly 100 were made.

In 2018, Doug Schroeder, former chief of police in Hesston, Kan., and a member of Alexanderwohl Mennonite Church in Goessel, received the Medal of Valor from President Donald Trump for his actions responding to a series of shootings in 2016 that killed three people and injured 14 in Hesston and Newton.