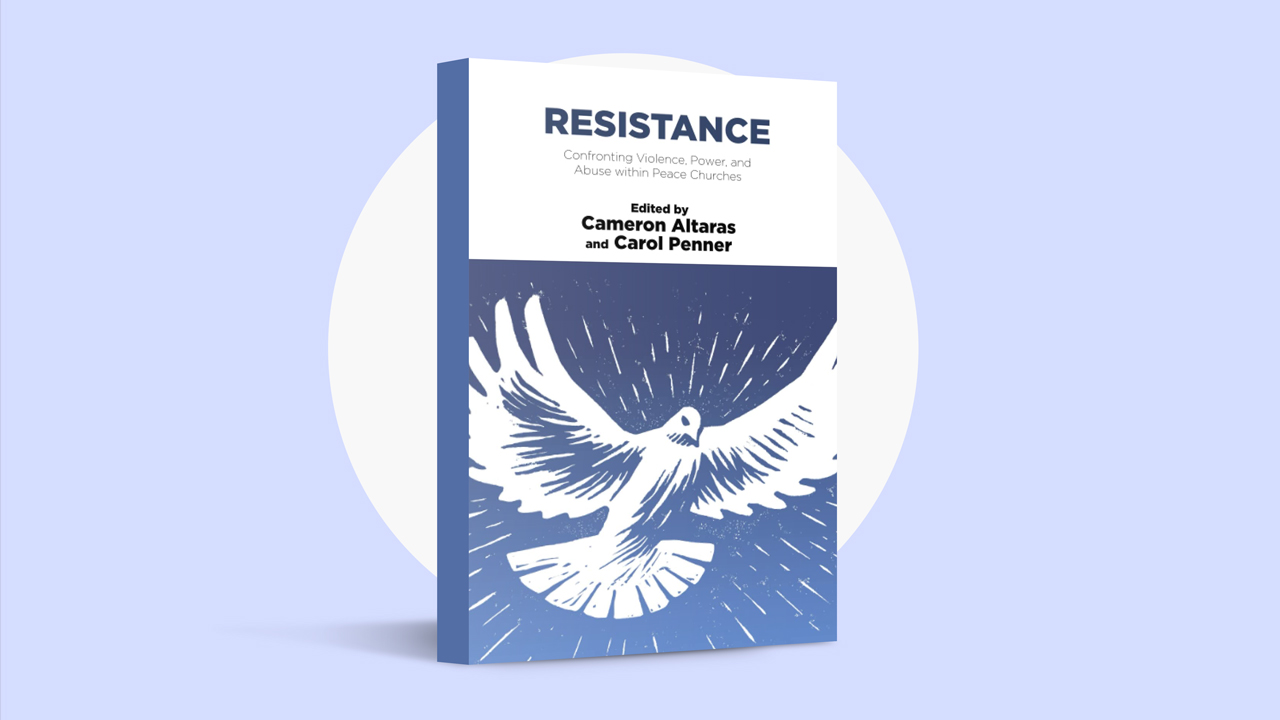 Years before the #MeToo movement — the wave of resistance to perpetrators of sexual abuse — Mennonites in some quarters were addressing sexual abuse and other forms of violence in the church. This Mennonite-inflected resistance has had grassroots origins: Dove’s Nest, for example, brings together educators and others to protect children from abuse in church settings. Our Stories Untold is a platform for survivors of sexual violence to speak out. Survivors Network of Those Abused by Priests (SNAP Anabaptist-Mennonite) takes inspiration from Catholics who have confronted clergy abuse. Into Account advocates for survivors of abuse in Mennonite and other Christian settings.

These examples of resistance to gender-based and sexualized violence in Mennonite-related settings have not traditionally been the stuff of Anabaptist peace theology. But in Resistance these collective efforts are championed as evidence of a contemporary Anabaptist peacemaking ethos.

Coeditors Carol Penner, a pastor and theologian, and Cameron Altaras, a poet and collaborative artist, argue that patriarchal biases and teachings on nonresistance have undergirded biblical interpretations and social norms that support masculine forms of power. Building on the feminist writings of Ruth Krall, Lydia Harder and others, the book lifts up narratives that explore resistance to sexual abuse in Amish and Mennonite contexts, in what the editors see as creative interaction with the tradition of nonresistance. Referencing many forms of interpersonal violence and structural harms, Penner and Altaras seek to “imagine ways in which resistance could occur and at the same time honor the Anabaptist theology that has shaped us.”

This anthology — with 34 contributions ranging from anguished personal narratives to poetry, essays on leadership and theological reflection — offers many openings for readers to consider whether inherited lessons about peace theology have been adequate to the task. The contributors often write with searing clarity. Conference minister Joanne Gallardo, in “Sexual Assault and Pacifist Theology,” begins: “Loving your enemy does not seem hard until you have an enemy.” In another essay, “Run, Dirk, Run! Wrestling with the Willems Story,” historian Kimberly D. Schmidt reinterprets the iconic martyr account of a Dutch Anabaptist man pursued by his jailer. Schmidt speaks from personal experience: “I am the ex-wife of an abuser. Turning back to rescue my now ex-husband only led to more victimization.” Considering the prevalence of domestic violence in contemporary society, she invites readers to visualize a transformative image of Dirk Willems as someone pursued by an evildoer but then surrounded, supported and uplifted by allies.

A KEY STRENGTH of this volume is its insistence that abusiveness — physical, sexual, emotional, spiritual — is linked to historic Christian entanglements with colonialism and racism, as well as to longstanding oppression of LGBTQ people. The book’s structure, in two parts, highlights this interplay, with a chapter on intercultural adoption (specifically, the 20th-century practice of some Canadian Mennonite families adopting Aboriginal children as part of a governmental effort to remove them from First Nations communities), as well as a chapter on white supremacy and its grip on American educational systems. Heterosexism in the church, too, receives significant attention, including an account by a former pastor who writes about his coming out as a gay man. Despite what he experienced as “attempted erasure” in church settings, he says, “I stay because . . . together we make up the body of Christ, and it matters that the abuse stops and those with power learn what it means to care for one another.”

In the book’s second part, narratives of resisting abuse appear alongside practical counsel for preventing harm. Bryan Born, president of Columbia Bible College in British Columbia, offers a case study of institutional response — transparently, and with a victim-centered approach — to newly divulged evidence of a professor’s abusiveness. Carol Penner highlights worship planning, sermon topics and congregational prayers as ways of addressing violence in parishioners’ lives. Here are accessible tools for putting peace theology into practice, amplifying voices and perspectives that have often been muted or silenced.

This book deserves wide readership. Most of the contributors have written out of U.S. and Canadian experiences, a starting point for Anabaptists elsewhere who have their own stories and frameworks for embracing resistance as peace theology.