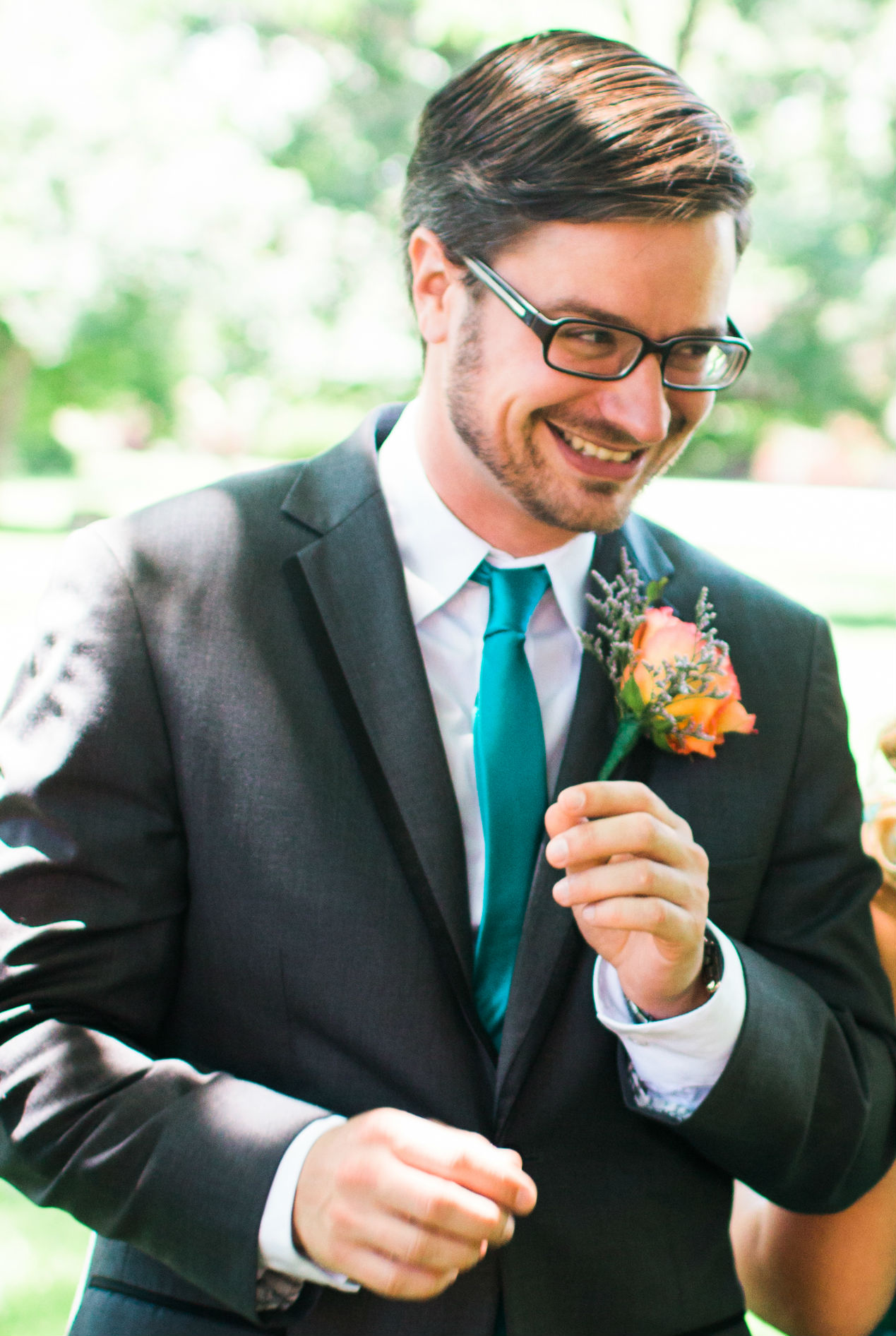 When Michele and John Sharp reflect on the past year, they both emphasize what the pain has felt like more than what they have learned. One year ago, their son Michael (MJ) Sharp was found killed alongside colleague Zaida Catalán while working for the United Nations in the Democratic Republic of Congo.

“I keep waiting to be able to crystalize something I’ve learned, but I feel like there’s still too much raw pain,” Michele said in a March 7 interview. “What I have are raw feelings, not necessarily learnings. That’s where I’m at.” (Michele wrote a piece reflecting on MJ available here.)

John, in a March 1 interview, echoed her: “What I’ve learned as much as anything is how to live with and hold the grief, the sorrow, the brokenness, the pain. That is making me a new person, changing me in ways I don’t yet recognize.”

In wide-ranging, emotional interviews, the Sharps each expressed a desire for MJ’s life and their journey to inspire young people to be active peacebuilders, to encourage Mennonites to renew their commitment to justice and peace, and to draw attention to the struggle of the people of Congo.

MJ, 34, was a 2001 graduate of Bethany Christian Schools, Goshen, Indiana, and a 2005 graduate of Eastern Mennonite University, Harrisonburg, Virginia. He served with Mennonite Mission Network in Germany and Mennonite Central Committee in Congo. In 2010, he earned a master’s degree in peace studies and conflict resolution from Phillips University, Marburg, Germany.

MJ and Catalán, part of a U.N. panel of experts investigating conflicts that have been ongoing in Congo since the mid-1990s, were abducted March 12, 2017. Their bodies were discovered in a shallow grave on March 27, 2017, and identified a day later.

“Our well-being is not tied to the investigation,” John said. “We have been given a gift of 500 years of a peacemaking tradition. We have not called for revenge but want to break the cycle of violence with something more restorative that will make peace for the Congolese people. Forgiveness is the only way.”

Because much of what MJ did required confidentiality, he didn’t provide many details about his work. Over the past year, the Sharps have learned, often through colleagues’ stories, more about what MJ did and, perhaps more notably, how he did it. MJ was not only good with languages but good with language: He knew when and how to ask questions and when and how to listen.

“The more I learn about MJ’s work the more I understand peacebuilding as action, as something more than talking, as more than something we don’t do,” Michele said. “MJ sat down with one of Congo’s most notorious killers. For 20 years, people used violence to counter violence, and it took this young man and his colleagues to listen to their stories. After building a trust relationship, the peacebuilders offered alternative ways to meet the rebels’ objectives nonviolently. In this way, the cycle of violence stopped. Talk about a revolutionary way to work.”

The Sharps wonder, however, whether such a strategy should be revolutionary. Perhaps the most remarkable part about MJ’s story, according to Michele and John, is that it shouldn’t be so remarkable.

Reporters from the New York Times and NPR describe MJ sitting under a banana tree with a warlord, listening to his story, offering alternative ways of meeting his goals. Over the course of several years, MJ and his team persuaded some 1,600 rebels to lay down their weapons, which impacted some 23,000 family members. Some of those militia groups sent condolences to MJ and Catalán’s families after their deaths.

“Maybe we could apply [MJ’s strategy] to white supremacist groups, who also have a story to tell and are working for a goal, which is probably unachievable, but to give the respect of listening, could be a first step in resolving that conflict,” John said. “Could we do the same in the church? Instead of arguing our position, could we spend more time listening to those with whom we disagree, and so offer our respect? And could that lead to better solutions?”

A Bible and history professor at Hesston (Kansas) College, John has had students say MJ inspires them to pursue peacebuilding work. Two universities have asked for permission to tell MJ’s story in their curriculum. Pastors consistently ask if they can tell MJ’s story in a sermon. Almost everywhere they go, there are people who have heard or followed the story.

“It’s hard to go to church and sing songs about discipleship like, ‘Here I am, Lord, send me,’ and think, Do we really mean that if it means our children will go to places where they will be in danger?” Michele said. “Something that’s been very painful to realize is that raising our children in the Mennonite faith can have consequences, can be costly. The truth is we should be having hundreds of our youth working at peacebuilding, not just avoiding military service.”

Both parents acknowledge that not everyone is called to be a peacebuilder in the way their son was, yet both expressed hope that Mennonites will continue to find ways not just to talk about a theology of peace and justice but to actively engage it.

“We should be as willing to lay our lives on the line as those who join the military,” said John, adding that MJ believed his current work assignment with the United Nations in Congo was the safest he had in a decade. Still, he always took proper safety precautions.

John and Michele received MJ’s remains in a steel box draped with a U.N. flag at the JFK airport.

“The big metal box had our son’s name on it. Arrows marked the head and foot ends. It felt so cold,” Michele said.

A hearse then took MJ’s body to Dover Air Force Base, where the official U.S. autopsy was completed. When the medical examiner called, Michele, who is a physician’s assistant, requested that the autopsy report be read as written. It was, and she interpreted it for John.

“The medical examiner told us he couldn’t say for sure, but his guess was the head wound was first and would have been fatal because that’s where the majority of the damage was done,” she said. “The hardest thing to know was that he was shot with a shotgun. I just hope he didn’t suffer.”

The next morning, the Sharps’ FBI agent, who had accompanied the family for days, was supposed to take Michele to see the body. John was planning to spend time with MJ’s body with the casket closed. Michele wanted to see her son’s body, even if it had to be with a sheet over him. After all, it had been weeks since the body was removed from the shallow grave in Congo.

At the last minute, however, the FBI agent informed Michele the medical examiner determined she couldn’t see the body.

“It’s more a mother thing than a medical thing,” she said. “I bore this child. He’s part of me. Just to touch him, to talk to him, that was my wish. I said, ‘Not even with a sheet over it?’ At that point I just had to trust the medical examiners and their judgment because I knew they were making every effort to comply to our wishes.”

The Sharps’ requests included draping the casket at JFK in a U.N. flag, not a U.S. flag, and having one of MJ’s colleagues travel to the United States on the airplane with his body. The flag request was meant to reflect his life lived as a citizen of the world, not just as a U.S. citizen.

MJ’s ashes have been scattered in places where he spent time – “he lived in too many places to be contained in one spot,” John said – and the Sharp family plans to make a pilgrimage to Congo to take ashes there.

A traumatic event for the Sharps came when Congo’s government released a seven-minute video documenting MJ and Catalán’s deaths. Michele and John chose not to view it. Catalán’s mother and sister did, as did an FBI special agent, who upon the Sharps’ request reported to them what happened.

The leader of the group who held MJ and Catalán told them to sit down because he needed to make a phone call. As Catalán sat down, MJ went over to her. He sat down, faced her and tried to calm her down and console her. Then the order for the shots came – from afar.

MJ was killed first, by shotgun. Catalán was not violated or tortured, though she was beheaded after being shot. They did not see who shot them.

UN human rights spokeswoman Ravina Shamdasani said, “We are utterly horrified” by what appears in the video, The Guardian reported.

“We wanted to know what was on [the video] and deal with the reality, not what we thought may have happened,” Michele said. “So many people are murdered and buried, and family members have no idea where their bodies are.…In time I chose to think of that video as a hidden blessing, as it gave us some answers, and those answers were reassuring.”

According to the FBI agent who watched the film, in their final moments, MJ did not show fear, Michele said. “To the end he continued to relate on a human, relational level to his captors. I believe that even though he knew the danger he was in, he was able to stay centered and not let his fear overcome him.”

MJ was 10 days away from returning to the United States. He had decided that, after two U.N. missions, he was ready for a change, Michele said.

“He would always say, ‘I’m in paradise, and for right now this is where God wants me. There’s no place I’d rather be,’” Michele said. “That’s where he was supposed to be, and that gives me a sense of peace.”

An irony for the Sharps is that the death of their son, not the millions who have suffered in Congo, captured international attention.

A September 2017 article in The Independent said, “Over the past year, the wave of violence in Kasai has claimed more than 3,000 lives and displaced an estimated 1.4 million people, with rights groups citing evidence of extrajudicial killings, rapes, torture and the use of child soldiers.”