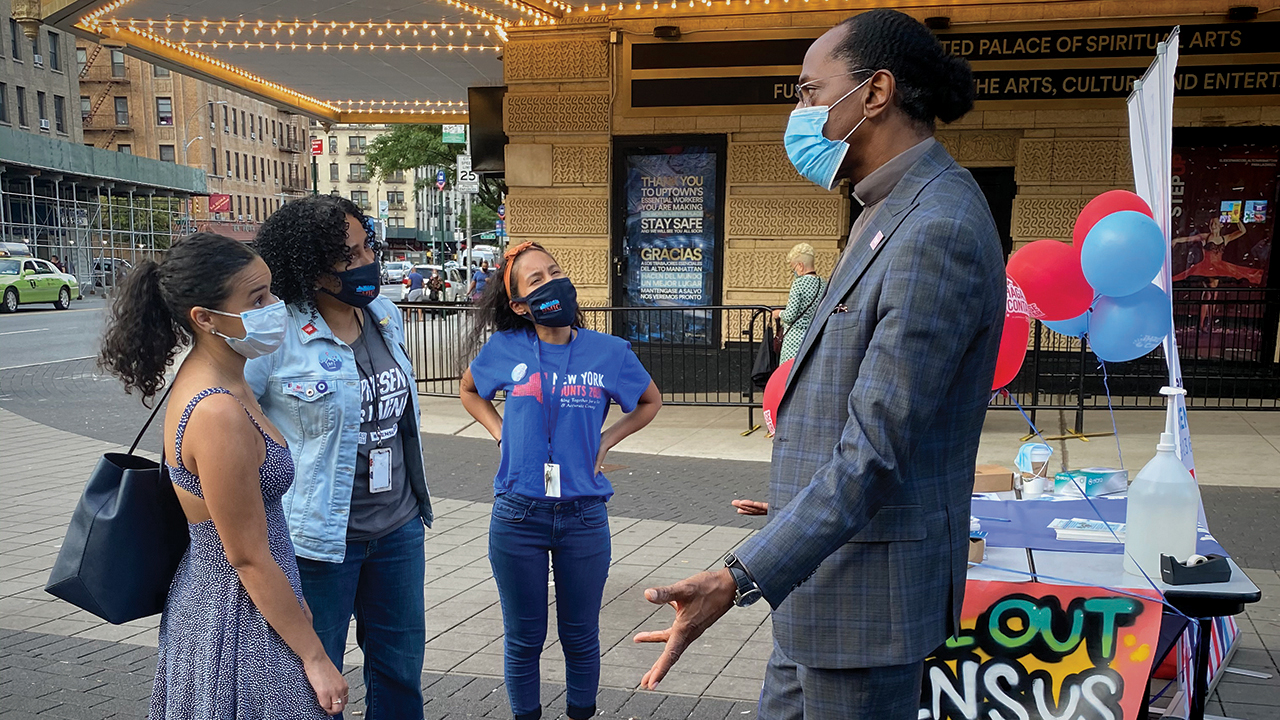 Al Taylor, pastor of Infinity Mennonite Church in Harlem, N.Y., has represented his New York City neighborhood in the New York State Assembly (the lower house of the Legislature) since 2017. In a telephone interview with Anabaptist World on Oct. 14 from his legislative office two blocks from his church, he reflected on how his Anabaptist faith impacts his two roles. The conversation has been edited for clarity and length.

Which came first for you, pastoring or politics?

I’d say pastoring. I’m in my 12th year of pastoring at Infinity Mennonite Church [a member of LMC: A Fellowship of Anabaptist Churches]. Prior to being elected, I worked for 27 years for the legislator I replaced. I’ve worked since college on behalf of constituents, and it goes hand in hand with mission.

When you look at Jeremiah, it says seek the peace of the city, and if the city prospers so shall I. There is a correlation as a pastor, as a follower of Christ. This is just another opportunity to meet the needs of the community, and I treasure it.

What kind of overlap exists between your two jobs?

More people call me “Rev” than call me the Assembly person. On Tuesdays in session, up to 14 Republicans and Democrats come together in the morning to have Bible study. It started around a conversation about commonalities. We believe Jesus Christ is the resurrected, the crucified, sits at the right hand of the Father. Those conversations alleviated space and distance, and everybody’s on equal footing. And it’s an extension of the platform that’s afforded me to share the gospel. I don’t hold back. I’m Jesus all the way.

When you switched about three years ago from being chief of staff to being Assemblyman, did that impact how you pastor?

Not at all. There are more demands. Sundays became difficult. I had to get people to understand that Sunday was my time to minister. If you want me somewhere, I will consider it, but nothing before 3 o’clock. I’m a pastor first. Sometimes I arrive just in time to get into the pulpit, but typically I try to stay away from those things unless it’s something dire.

Some Mennonites might have concerns about a pastor holding political office. Why does it work for you?

People will say, “Oh, you’re a politician,” and I just raise my finger and say, “I consider myself a public servant.” I think there’s a difference. I serve and work and live in the same district I grew up in. I don’t know that you can separate the two.

Look at Nehemiah. He was a governor. Look at Joseph. Joseph was second in command in Egypt. That’s politics. And he was favored. He did great work for those people, and God used him to save all of Israel.

I invite people who may have concerns about being a pastor and an elected official to partner with me to share the gospel together. I am not a salaried pastor. I have a wife and five kids, and I’m not apologizing for being an elected official.

You’re a Democrat. How does your Anabaptist faith inform that affiliation?

If I cannot sleep at the end of the day and feel I’ve done something that is not going to glorify God, I’ve got a problem. I had people tell me I won’t get re-elected because I refused to vote for the bill that [expanded abortion rights in 2019]. I said I can’t vote in ­favor of that bill, and I got a lot of ­nasty communication. I’m always going to honor God with the decisions I make.

When we look at the parties out there, there’s enough mud on both sides of the fence, so I don’t want to get into the weeds of that. But what are we doing to transform our communities?

Coming out of Harlem and seeing some of the atrocities that have happened nationally, there’s a litany of things that have happened in the Black community to victims that were not armed and posed no threat, yet they were violently killed by police. I’m a former military police officer. I’ll stand here with the police because the people know me, the police know me, and the best way to resolve this is leading by example.

We have been doing prayer walks in public housing for about 14 years at 6 on Thursday mornings. Rain, sleet, snow, it doesn’t matter. The idea is to be a source of hope. We just had the idea that “God, we need you in this space because this is not how we need to live.” There’s something better than children witnessing shootings, passing a place police taped off. Gunfire is not a normal way of living.

We don’t get the luxury to pick and choose who we are going to serve. God has presented them to us. I invite anybody to pray for us. Put Pastor Al and Infinity Mennonite Church at the top of the list. Pound for pound we are doing the most with the least. There’s enough work to go around, so we don’t need to put one against the other.

Do Assembly colleagues know you’re a Mennonite? Are you rewriting the Mennonite stereotype?

I understand where you’re coming from. When I was in South Africa 10 years ago, I was going to a workshop with Mennonites, and I’m looking in each room thinking, “Where are they?” And I looked in and saw these guys who were Middle Eastern or something. “I don’t see any white people. That ain’t them.” And they were my Ethiopian brothers who were Mennonite. I was ecstatic. I cannot wait to go back to Africa. I totally embraced my Anabaptist brothers.

Some may ask, “What is a Mennonite?” You give them a brief rundown. I try not to give too much. I say look into it and come back and talk to me.

You have a bit of power as a legislator; how does that feel?

I don’t perceive it as power as much as an opportunity to empower. You matter. You were created by God. What are you going to do with what you have? People don’t really care what you know until they know you care. I try to be transparent. I just love what God is doing in the city.