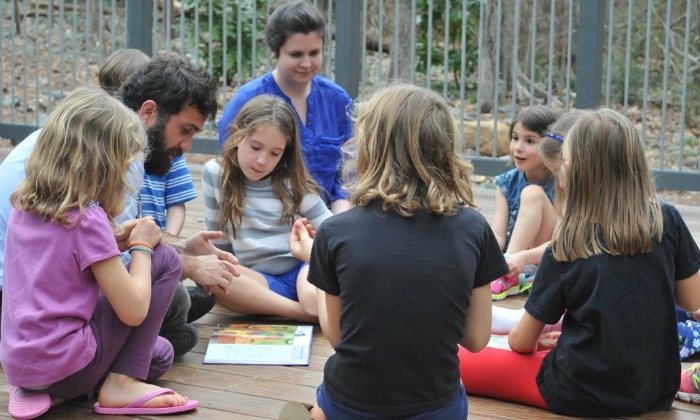 On Saturday, May 21, Isaac Villegas, pastor of Chapel Hill (N.C.) Mennonite Fellowship (CHMF) and a member of the Mennonite Church USA Executive Board (EB), officiated at a same-sex wedding for two members of his congregation. On May 23, Villegas resigned from his role with the EB. According to Virginia Mennonite Conference (VMC) policies, the automatic response for a pastor who performs a same-sex wedding ceremony is suspension of pastoral credentials. At press time, VMC had not contacted The Mennonite or Villegas about the status of his credentials.

Update (May 26): On May 25, Virginia Mennonite Conference informed Villegas via e-mail that his pastoral credentials had been suspended. The conference conducted a short investigation by a three person team—Rev. Spencer Bradford, Eastern Carolina District Minister, Clyde Kratz, VMC Executive Conference Minister, and Gordon Zook, a member of the Faith and Life Commission–that confirmed that Villegas did perform a same-sex wedding ceremony on May 21. The e-mail from the group to Villegas said, “…the Faith and Life Commission suspends your credentials as an ordained minister of the Virginia Mennonite Conference effective immediately on the basis of a breach of trust with the Conference.”

The conference will set up an Accountability/Support Team to work with Villegas over the next year to “heal the breach of trust and restore mutually agreed understandings and expectations of credentialed ministry.” The written statement said, “We are saddened by the necessity of this action and pray that our unity in common mind (2 Cor. 13:11, Phil. 2:2) and shared ministry will be restored by Christ.”

In a May 26 interview, Villegas reflected on the wedding and said, “I sensed the Spirit at work when I pronounced the couple wife and wife in the name of the Father, Son and Holy Spirit.” Villegas has no regrets and says he would celebrate another same-sex wedding in his community again if the opportunity arose. “I hope that in meeting with the [accountability] group that FLC would change their minds about disciplining pastors who perform same sex weddings,” he said.

This is the first time that the 2013 VMC policy regarding credentialed leaders who perform same-sex covenant ceremonies has been put to use. Suspension means that all “ministerial privileges” granted by the conference are put on hold, including the ability to serve as a delegate at VMC assemblies. Credentials may be restored at the end of the allotted suspension period if there is acknowledgement of the breach of trust by the minister and an agreement to a year of probation.

In a policy developed in April 2015, the FLC reiterated that performing a same-sex wedding ceremony was considered pastoral misconduct and represented a “breach of trust.” The policy cites a 2014 MC USA polity manual, A Shared Understanding of Church Leadership, which lists a number of “breach of trust situations,” including, among others, use of pornography, intentional dishonesty, acts of violence, and financial irresponsibility. According to the FLC policy, performing a same-sex ceremony relates to criteria concerning “failure to be accountable to the conference that holds the credential,” “major theological devitation from Christian/Anabaptist understandings,” and “behaviors that undermine the congregation, another congregation or the relationship with the wider Mennonite church.”

During their February meeting, EB members also approved a new policy regarding the practical implications of two resolutions—Forbearance in the Midst of Difference and Resolution on the Status of the Membership Guidelines—approved by delegates at the Mennonite Church USA convention in July 2015. The new board policy includes the following statement: “In its deliberation, the board will welcome the diverse perspective within the church; at the same time, we expect board members to honor our decisions and the documents we are trusted to uphold.”

In a May 13 interview, Villegas said he first shared his intent to perform the wedding, affirmed by his congregation, with members of the EB Executive Committee in fall 2015 in a letter outlining CHMF’s discernment process. During in-person meetings in February, Villegas says, “it was the general counsel of the [Executive] Committee that it would make the most sense for me to resign if I were to perform the wedding and that we bring this before the whole board to test that counsel.”

In his resignation letter, addressed to MC USA delegates who appointed him to the EB in July 2013, Villegas says that he shared his intentions with board members during their February meeting and received some counsel to resign. He writes, “As a pastor who is committed to the movement of the Holy Spirit in my congregation—a congregation that affirms the blessing of same-sex marriages—I am at variance with part three of the Membership Guidelines.” Villegas also cites the example of 13 other Mennonite pastors who have previously performed same-sex wedding ceremonies and offered affirmation for the lives and ministries of LGBTQ individuals.

Villegas said: “I’m grateful for the gay and lesbian people who are at my church, and I can’t imagine our congregation without them and without their gifts. I’ve seen God’s love in their lives and in their love.”

During his time on the board, Villegas served as a member of the Executive Committee and as chair of the Resolutions Committee for the 2015 Delegate Assembly.

Patricia Shelly, MC USA moderator and chair of the EB, said that board members received Villegas’ resignation last week but have not had time to act on it as a board. They plan to discuss the resignation further at their next board meetings, June 2-4 in Orlando.

In a May 19 interview, Shelly acknowledged that when Villegas shared his intention to perform a same-sex wedding with board members in February, the board gave counsel, but there was not a unanimous response or any specific action taken. “When we discuss Isaac’s resignation in Orlando, I am sure there will also be different kinds of responses,” said Shelly. “The board will not be of one mind.”

Shelly also emphasized that the board is aware that Virginia Mennonite Conference is processing this decision as well and that the EB will “respect the work they [the conference] are doing.”

Shelly and other board members expressed a deep sense of grief at Villegas’ resignation and thankfulness for his contributions. “While I can’t speak for the board yet in terms of our response to Isaac’s resignation, I can say unequivocally that board members will be grieved he’s no longer part of our work.”

The wedding comes after extensive correspondence between CHMF members and VMC staff and committees.

On Sept. 22, 2014, Martha King and Meghan Florian, CHMF representatives for equality in membership, wrote a letter to VMC’s Faith and Life Commission (FLC), the conference group responsible for leadership on “spiritual, doctrinal and faith and life issues,” informing the group of CHMF’s decision to “welcome people who are LGBTQ [lesbian, gay, bisexual, transgender and queer] into all aspects of church life and to extend all the rights and privileges of congregational membership” and to join the Brethren Mennonite Council for LGBT Interests’ Supportive Communities Network. This decision came after an 18-month discernment process for the congregation. The letter also asked members of the FLC to offer their opinion on whether or not CHMF should remain within the conference or seek membership elsewhere.

In subsequent letters and exchanges, members of CHMF, including Villegas, King and Florian, corresponded with conference and FLC leaders about their congregation’s process and biblical and theological rationale for this decision. During an April 25 meeting, FLC members affirmed CHMF’s continued membership in the conference, while also stating that VMC policies prohibit pastors from officiating same-sex marriage ceremonies.

In May 2013, the FLC issued a statement reaffirming Article 19 from the Confession of Faith in a Mennonite Perspective which states, “We believe that God intends marriage to be a covenant between one man and one woman for life.” The statement also says that “if a credentialed person conducts a covenanting ceremony for a same-sex couple, their credentials will be immediately suspended while a review is underway.”

According to King, when Villegas was approached about performing a wedding, he brought the query to CHMF deacons for processing. In a May 13 interview, King said the deacons “discerned that it would be OK for Isaac to go ahead with performing this wedding” and brought the question to the entire congregation. In November 2015, the congregation affirmed the direction.

In a Nov. 7, 2015, letter, Villegas informed the FLC of his intention to officiate a same-sex wedding and asked the commission to reconsider suspending his credentials. “I request this exemption because of my pastoral calling in our congregation’s context and my experience with this couple,” he wrote. “I believe that God desires for me to bless their relationship with the ordinance of marriage.” He also cited the recent resolution on Forbearance in the Midst of Difference as grounds for reconsidering suspension. In addition, this spring, the pastoral team of Community Mennonite Fellowship in Harrisonburg, Va., sent a letter to the FLC asking them to reconsider suspending Villegas’ credentials.

In a May 19 interview, Community Mennonite pastor Jennifer Davis Sensenig said the conference’s “stated intentions start to confuse variance and misconduct.” She emphasized that a review without automatic suspension would seem more in keeping with theological variance. Davis Sensenig and other members of the Community Mennonite pastoral team visited CHMF in 2015, and she praised CHMF’s transparency with the conference throughout their process.

“VMC is diverse, and we can still rely on the Holy Spirit for times like this,” said Davis Sensenig. “I hope our leaders will feel like they have options.…I think that’s what’s so hard. A lot of us have experienced Chapel Hill and Isaac as being agents of the Spirit of Christ in significant ways.”

In January, Villegas also met face to face with the FLC to answer questions about the congregation’s process and his decision to perform the wedding. Other CHMF members were not permitted to attend since FLC meetings are closed.

In April, the FLC created a new policy, sent to all VMC credentialed leaders on May 3, that outlined specific procedures for credentialed leaders who perform a same-sex wedding. The policy notes that performing a same-sex wedding represents a “breach of trust” by a credentialed minister in three areas described in the MC USA ministerial leadership handbook, A Shared Understanding of Church Leadership: “failure to be accountable to the area conference that holds the credential,” “major theological deviation from Christian and Anabaptist/Mennonite understandings” and “behaviors that undermine the congregation, another congregation or the relationship with the wider Mennonite church.”

The policy stipulates that if the performance of a same-sex covenanting ceremony is confirmed, the minister’s credentials are automatically suspended. Suspension means that all “ministerial privileges” granted by the conference are put on hold, including the ability to serve as a delegate at VMC assemblies. Credentials may be restored at the end of the allotted suspension period if there is acknowledgement of the breach of trust by the minister and an agreement to a year of probation.

Although he would not comment on Villegas’ specific situation, VMC executive conference minister Clyde Kratz wrote in a May 17 statement: “With clear knowledge of VMC’s alignment with the Confession of Faith in a Mennonite Perspective, a Shared Understanding of Church Leadership, the 2013 Faith & Life Commission statement and May 2016 policy, any credentialed leader who conducts a same-sex wedding, therefore, intentionally breaches policy for which suspension is the automatic response.”

Villegas’ district minister, Rev. Spencer Bradford, and members of the FLC were contacted but declined to comment for this story.

Even if his credentials would be suspended, members of CHMF have said they will still consider Villegas their pastor and are planning a celebration of his 10 years of ministry on June 5.