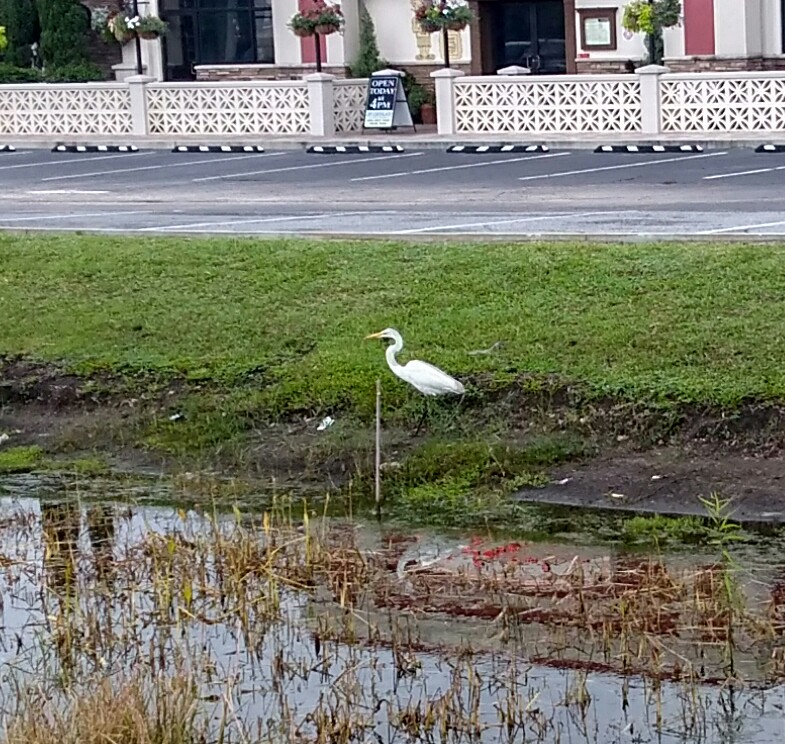 Ric Hudgens is co-pastor of North Suburban Mennonite in Libertyville, Illinois. Ric blogged the Convention at www.northsuburban.org. This is a condensed version of his weeklong entries.

I purposefully walked over to the Orlando Convention Center every morning from my hotel about a half mile away. I welcomed the exercise and the chance to breathe unfiltered air, no matter how hot. There was a ditch beside the sidewalk filled with litter, but also containing its own miniature ecosystem. There was an egret standing nobly beside the ditch each day, without anxiety or fear, undaunted by the climate, oblivious to human aims and objectives being pursued nearby, feeling completely at home and feeling totally loved.

“Remember the egret,” I told myself.

Somewhere Wendell Berry says we are not called to live more simply but more complexly: “taking more and more things into account.” The Orlando Convention surely accomplished that. “Love is a verb” had us looking all week for the direct object of that verb.

It sometimes seems to me that humble Mennonites gather at conventions to make resolutions about becoming more humble. It’s such a contrast to African-American and Latinx conferences I have attended that conclude with calls for more urgency and boldness. I don’t know what to make of that difference except to note it.

But if we are to take seriously the enormous challenges before us as a planet and as a people, then becoming more and more humble while becoming less bold and less courageous is surely a death sentence. The convention may not have risen to the occasion, although we certainly made a solid (though humble) effort.

I really enjoyed the Future Church Summit. The advanced development of these group processes for facilitating dialogue are years ahead of how a traditional congregation functions.

But the FCS process design, like any process, has strengths and weaknesses. It’s great for defining a core constituency. It’s good at locating points of difference across a spectrum. It is not good for visioning a future. Given our stated purpose, I think FCS Orlando was a good Part One, but that we now need Future Church Summit Part Two.

FCS Orlando was map-making: mapping MC USA across consensus issues and concerns. We know better where we stand now, two years after the Kansas City 2015 convention.

But a map doesn’t tell us where to go next or how to get there. A map is always limited by what is familiar, what is already known.

I believe FCS Part Two will have to empower voices of prophecy among us—voices not of reorientation (as in Orlando) but disorientation—imaginatively throwing our vision forward into a future that will require everything we have in order to get there.

The places we need to go are what the old cartographers labelled “where dragons dwell”.

They are the places where Jesus goes ahead of us.

Did you attend the Future Church Summit? Do you have a reflection to share? E-mail us your thoughts about this gathering: Editor@TheMennonite.org.