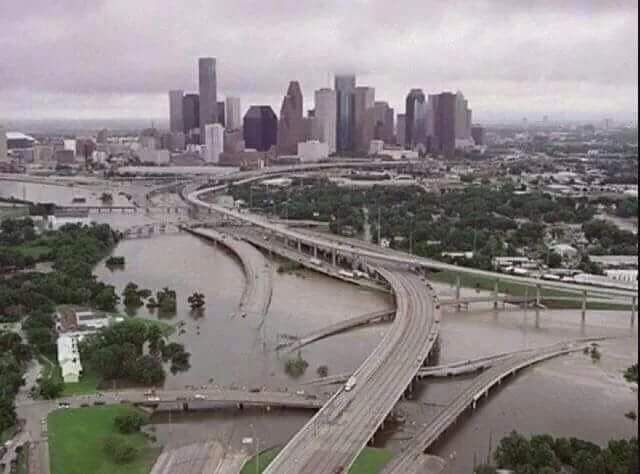 Over the weekend, Tropical Storm Harvey hit land, bringing intense rainfalls and flooding to Houston, the fourth largest city in the United States. The city is home to four Mennonite churches whose pastors have been keeping in touch with each other and their members via phone, as they continue to pray for safety and for an end to the onslaught of rain. Mennonite Disaster Service also has a team of people scheduled to arrive in the city later this week, on Wednesday or Thursday, to begin working with local organizations to assess damage and begin relief work.

The storm, which the National Weather Service referred to on Twitter as “unprecedented” and “beyond anything experienced,” began on Friday, Aug. 25, and though rains have slowed, drizzle continues to be in the forecast for the week ahead. So far, five fatalities have been reported. Many across the city are reporting injuries, and there are widespread reports of homes and businesses being damaged or destroyed by floodwaters across the city.

Pastor Alberto Parchmont of Iglesia Menonita Casa del Alfarero in Pasadena, Texas, was grateful to report that all the members of his church were safe and had shelter in dry places. Parchmont is currently providing shelter for six people in his own home.

“Everybody is in communication,” said Parchmont on Aug. 28. “We check in and ask, What happened to you? Are you OK? I called every day to check in on everybody in the congregation to see if they have a problem, and so far every person has said that they are OK.”

Parchmont also noted that the storm causes economic concerns for congregational members. Many of them who work in construction or as teachers’ aids are losing hourly income, many of them for up to a week, as local businesses and schools remain closed due to flooding.

According to Marty Troyer, pastor of Houston Mennonite Church, church members have reported receiving anywhere from 27.5 to 40 inches of rain over the last three days.

“We’d definitely invite prayers for all the Mennonites and people in Houston,” said Troyer. “I’ve checked in with all three of the Mennonite churches and [the] church plant in the city, and all [are] reporting [being] safe and dry. Today we’ve lost a couple of cars. Please pray for ongoing safety. And I would ask for prayers for us as we try to live out our faith to our neighbors. There are definitely people who need help, and I would ask for prayers that Mennonites here in Houston can do what we can and be bold enough to see ourselves as part of the solution.”

Pastor Simon Lian Hmung Tlumang of Chin Emmanuel Baptist Church in Houston, a member of Western District Conference, said that some members of their congregation have lost vehicles, as apartment parking lots flooded.

Tlumang notes that right now members of the church are mostly hunkered down in their homes and unable to help their neighbors. “Right now, even we cannot go to anybody,” he said in an Aug. 28 phone interview. “Even I myself am just sitting in the house. We cannot go outside because of the flooding, and I don’t see anybody outside.”

Update August 30: In Corpus Christi, Texas, a sinkhole opened up in front of Felipe Almodovar’s home when strong winds broke a main pipe line in his front yard. Almodovar is pastor of Prince of Peace Mennonite Church. Although all members of the congregation are safe, Prince of Peace’s church building sustained major damage when the majority of the roof’s shingles were blown off by winds gusts of over 150 miles per hour. The damaged roof let in water, which has damaged the church floors, walls, pews, carpets and curtains.

“We went on Sunday morning to the church. Outside there were only a couple of trees uprooted,” said Raquel Almodovar, Felipe’s daughter and the church secretary. “It was only when we went inside that we realized we were walking on water literally standing on the carpet. As we looked up. that’s when we started seeing all the damage that was done.”

Raquel says that she has been contacted by another Mennonite congregation in S. Texas who is interested in coming to help the community repair the building, which was uninsured at the time of the storm. Raquel says the cost of insurance was too high for the small congregation of 40 members.

“We’re going to need help with their [Prince of Peace’s] rebuilding somehow,” said Lupe Aguilar, South Central Conference Regional Conference Minister for South Texas. Aguilar said he is grateful that two other churches in the path of the storm fared well and didn’t sustain damage.

Graciela Tijerina, pastor of Community of Friends, another church plant in Corpus Christi, wrote, “I cannot stop saying [that] God is good and praising God!” Tijerina was able to take shelter in the home of a local couple to wait out the storm.

“The news was reporting the worst, and on Friday the storm moved north 30 miles from Corpus and hit Rockport, Texas, where it cause so much damage. Corpus did sustain some damage (fallen trees, power outages, etc.), but not as bad,” she wrote. Tijerina returned home on Saturday. She found some water coming through the sliding door at her home and her car wouldn’t start, but she still celebrates God’s goodness and protection.

“Please continue to pray for the coast of Texas as Harvey continues to linger,” Tijerina wrote. “My family and friends in Houston are suffering with the flood.”*

Mark Beach, communications manager for Mennonite Disaster Service, says the organization has already begun to prepare to be a presence in relief and rebuilding efforts after the storm passes.

“We expect to be there,” said Beach in an Aug. 28 phone interview. “What’s amazing is that there have been so few fatalities, and we hope it stays that way and all that’s left is to rebuild and get people back in their homes. It’s hard to understand the magnitude of the storm at this point in time. We can’t speculate what it’s going to be, but we know there’s going to be a role for MDS.”

The organization has started collecting donations and been in touch with local Houston Mennonite pastors and leaders at nearby San Antonio (Texas) Mennonite Church and Austin (Texas) Mennonite Church about assisting in relief efforts. MDS is also in regular communication with long-term recovery committees in both Houston and nearby Bastrop, Texas, where MDS has already been at work addressing a previous flood. MDS is also part of a national organization, Voluntary Organizations Active in Disaster (VOAD), which helps coordinate rebuilding efforts after disasters.

in rebuilding in 2001, following Tropical Storm Allison, which also led to widespread flooding and displacement in the city.

All three congregations canceled their usual Sunday morning worship services. In lieu of gathering in person, Houston Mennonite Church posted a virtual worship service on their website, including a video message from Troyer and prayers and questions for church members to engage.

“Talking about canceling worship just sounded strange,” said Troyer. “We don’t have to get together, but we don’t need to cancel worship.”

The service opened with a praise and hope drawn from Luke 1: “My soul magnifies the Lord, and my spirit rejoices in God my Savior.…His mercy is for those who fear him from generation to generation. He has shown strength with his arm; he has scattered the proud in the thoughts of their hearts. He has brought down the powerful from their thrones, and lifted up the lowly; he has filled the hungry with good things, and sent the rich away empty.”

MDS is now accepting donations to help fund their work in Houston following Tropical Storm Harvey. You can also sign up to volunteer in ongoing relief efforts.