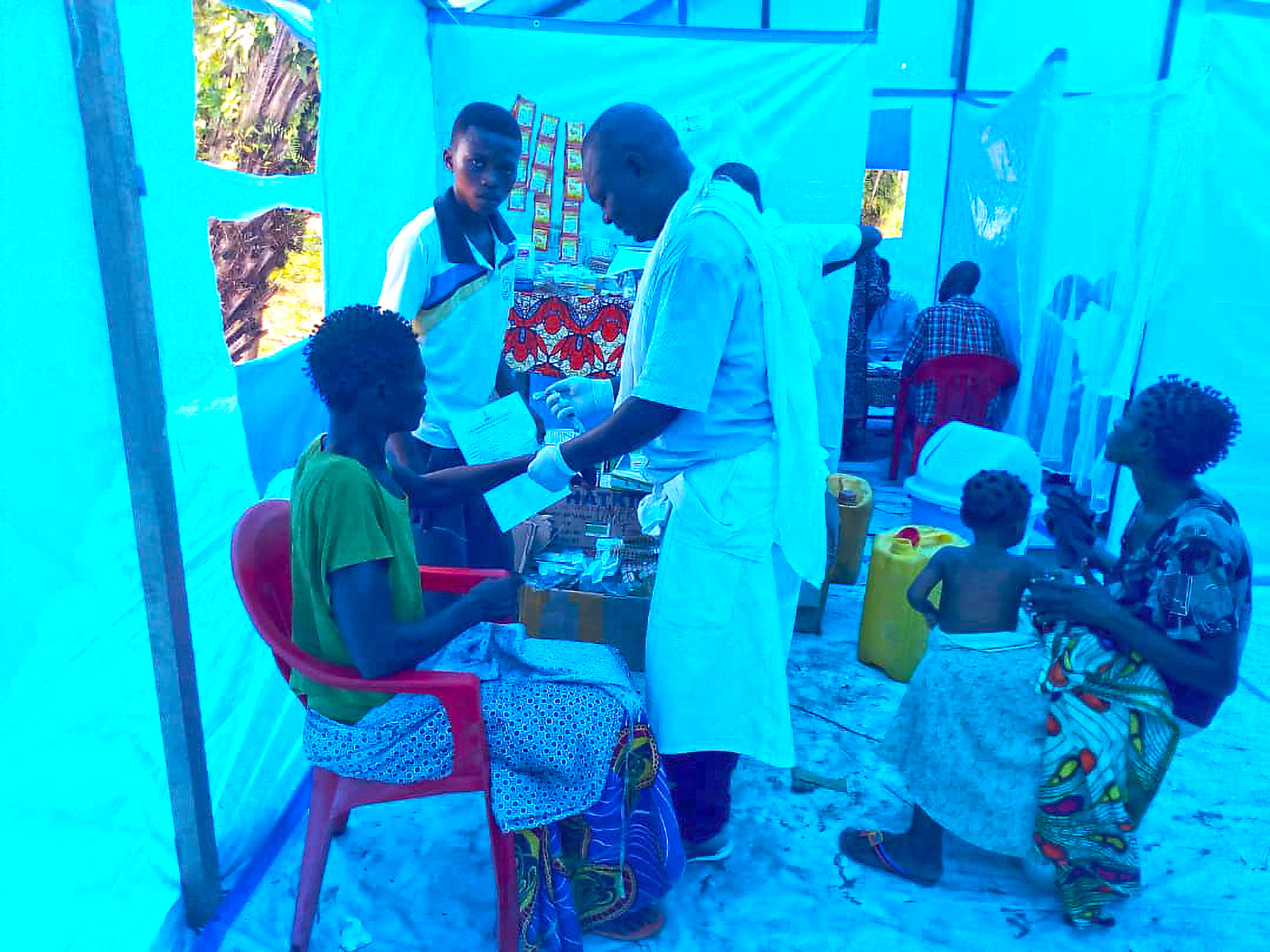 Photo: Fernand Muvuma, a nurse from Ndjoko Punda, treats patients in the blue-tarp shelters that housed the UMER clinic in March. Photo by Joseph Nkongolo

A march medical clinic organized by Communauté Mennonite au Congo (Mennonite Church of Congo) proved to be a training ground for the looming challenge that confronts the Democratic Republic of Congo as COVID-19 assaults the capital city of Kinshasa.

The need for medical care was urgent after a severe storm destroyed much of the city of Ndjoko Punda in November 2019. The storm directly killed 16 people. Hundreds more died in the months that followed due to malaria and gastro-intestinal disease compounded by inadequate nutrition and the destruction of the health infrastructure.

The UMER medical team, headed by four Congolese Mennonite doctors, worked in blue-tarp shelters in two locations because the Ndjoko Punda hospital was destroyed in the storm. Set-up began March 2, and two days later they were ready for patients. Treatment continued through March 13. UMER left the shelters, stocks of medicine and lab equipment for local medical staff to continue the work.

National television and newspapers covered UMER’s intensive two-week clinic, which treated 2,224 people, nearly half of them suffering from malaria. They also saw cases of diarrheal diseases, acute respiratory infections, typhoid fever and flu, among other conditions. Joseph Nkongolo, who served as UMER administrator, says a surprise was to discover the prevalence of diabetes in the patients they served, 40 cases.

“We offered a quality intervention that was highly appreciated at all levels—patients and their families, the local church and the municipal government,” Nkongolo says. “We discovered 373 cases that require surgeries, things like hernias and ovarian cysts. The people of Ndjoko Punda asked that we return to help them with this second stage of care.”

Ndjoko Punda originated in 1912 as the first station for Congo Inland Mission, predecessor of AIMM. Brick buildings that offered services to the residents of Ndjoko Punda for decades—the hospital, health centers, churches and schools—were destroyed during torrential winds and rain last year on the night of Nov. 22. More than 100 public buildings and 1,700 homes collapsed, hundreds of people were injured, and 16 died.

Nkongolo says they didn’t know it at the time, but it seems the two-week clinic in Ndjoko Punda was preparing them for a rapid response to the COVID-19 crisis. Congo’s Ministry of Public Health reported the country’s first case of COVID-19 on March 10 in a person who arrived from France.

Mennonite Church of Congo is sponsoring radio broadcasts encouraging their communities to practice good hygiene and physical distancing as much as possible where households often have 20 or more people.