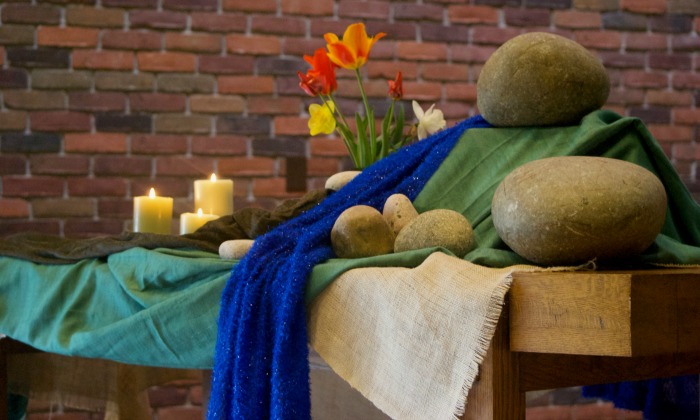 Photo: The visual display used in Sermon on the Mount Chapel at Anabaptist Mennonite Biblical Seminary, Elkhart, Indiana, throughout the Rooted and Grounded conference. Photo by Rachel Hiebert/AMBS.

“We must choose systems of life over systems of death and stand up to defend the oppressed. There is only one side, and that’s the side of the Creator and creation. Anything counter to the principles of life is doomed to fail.”

In her Friday keynote address, Augustine shared stories of indigenous leaders around the world who are resisting environmental degradation and mineral mining that are endangering indigenous lives and lands and global environments. Augustine rooted these movements for justice in long-term struggles against the Doctrine of Discovery, a philosophical and legal framework dating back to the 15th century that gave Christian governments moral and legal rights to invade and seize indigenous lands and dominate indigenous peoples. Augustine noted that this framework continues to give corporations legal rights to take over indigenous lands today.

Augustine works directly with the Wayana people in Suriname, who have no legal rights to their ancestral lands. Augustine shared stories of people being resettled and exposed to toxic chemicals and polluted water from waste generated by the Newmont Mining Corporation, a company that receives development capital from the U.S. government. Augustine also noted that Mennonite Church USA’s current investment funds include shares in Newmont Mining.

She urged conference attendees to get engaged in advocacy through financial and political organizations in order to pressure the U.S. government and corporations to add more regulation in order to protect indigenous people and prevent environmental degradation.

“We’re collectively invested in a death machine. And what does the death give us? Money that gives us short-term security and luxury. But do not be afraid. The Creator of life is a power that cannot be overcome,” she said.

Augustine was one of more than 30 presenters who shared papers, workshops, sermons and keynote addresses focusing on Anabaptist commitments and connections to God, the land and all of creation.

Saunders traced the ways “connections between the story of Jesus and the story of creation” occur in Scripture, especially in the Gospel of Matthew and the Sermon on the Mount.

“Matthew’s eschatology imagines neither the destruction of the earth nor the flight of humans from it but the restoration of the relationships between God, humankind and the earth,” said Saunders. “As ‘salt for the earth,’ Jesus’ disciples act as preservatives and signs of God’s faithfulness to the ancient covenants. They may also exercise a role in the redemption of the earth.”

Saunders emphasized the reconciling role played by Jesus, who is “God with us,” to Christians seeking to carry out their reconciling work with all of creation, including people and the earth.

During a Friday morning chapel service, Katerina Friesen, interim pastor at Belmont Neighborhood Fellowship in Elkhart, preached on Matthew 27:50-60, the story of Jesus’ death on the cross when “the earth shook [and] the rocks split.”

Friesen told a story from the Lakota people in North Dakota, who found “sacred stones” shaped, smoothed and rounded by the confluence of two rivers. They saw these stones as “enspirited” by the Creator and used them during prayer. Later, European colonists saw the same stones and named them “cannonballs.”

“Instead of gifts from the river, they saw ammunition for war,” said Friesen. “Our perspective shapes our practice.…Is nature a tool and a resource for human use or is nature a gift and alive?”

Friesen traced the importance of stones and creation at many places throughout the biblical narrative, including serving as the “first witnesses for the resurrection of Jesus.”

Friesen said many humans today are paralyzed with inaction in front of current ecological crises and the “cross of our day—the cross of climate change.”

“The rest of creation is not paralyzed,” she said. “Despite our silence, the rocks cry out. Perhaps if we give ear, we might join their lament.…Against all odds, Christ is not dead but is our risen cornerstone. He calls us to be living stones.”

On Saturday, also Earth Day, Todd Wynward, a wilderness educator, founder of Taos Initiative for Life Together [TiLT] and a writer from Taos, New Mexico, spoke about lessons learned from the Water Protectors, who led a movement against the Dakota Access Pipeline at Standing Rock.

“Standing Rock broke my heart open,” said Wynward. “It broke my heart to know what my ancestors, people of privilege, have done. We have broken the covenant to the land and land-based peoples again and again.”

Wynward said the Water Protectors at Standing Rock engaged in the “most healthy evangelism” he’s ever seen and helped create a clear vision of protection for “those things God calls sacred.”

Wynward encouraged participants to participate in a movement to “re-wild” ideas about God and faithfulness. He shared about his own journey away from a pursuit of profit and “distraction by gadgets” and toward a focus on encountering God in the wild and in creation.

“What will it take for us to break the pattern of corporate obedience?” said Wynward. “If we leave this conference and don’t change, that’s called denial. Comfort, prestige, power and ego are all temptations. Think about Jesus’ sojourn in the wilderness. Are we going to destroy ourselves beautifully for God?”

During the conference, AMBS leaders also dedicated a new array of solar panels. The array, the largest in Elkhart,

Indiana, was made possible through a grant from AEP (American Electric Power) administered by Hoosier Interfaith Power and Light, Indianapolis.

The panels expected to generate nearly 79,000 kWh of energy annually.

The dedication ceremony included brief information about the panels and the process for installing them and a time of singing and a prayer.

“We rededicate these panels to you, God, as a sign of our commitment to share your light in the world,” prayed Sara Wenger Shenk, AMBS president.

Throughout the conference, participants had opportunities to attend workshop sessions on a variety of topics, including Chance the Rapper’s ecological and economic vision in Chicago, tools for developing organizational sustainability plans, educational sessions on environmental racism and justice movements, theological models for creation care and more.

Participants also had a chance to see a staged reading of a new play, Discovery: A Comic Lament. Written by current

AMBS student Alison Brookins and soon to be produced by Ted & Company, a theater company based in Harrisonburg, Virginia, the play explores the roots and current impact of the Doctrine of Discovery through 10 scenes. Various scenes address indigenous experiences, the foundation of the Doctrine of Discovery, and Russian Mennonite stories of displacement and migration.

On Friday, participants had an opportunity to participate in one of six immersion experiences: Goshen (Indiana) College’s Merry Lea Environmental Learning Center, Wolf Lake, Indiana; a tour of the Potawatomi tribe’s Trail of Death sites near Rochester and Benton, Indiana; Goshen’s wastewater treatment plant; a tour of the Mezsick farm, a sustainable farm enterprise; and an informational session about AMBS’s new solar panels.